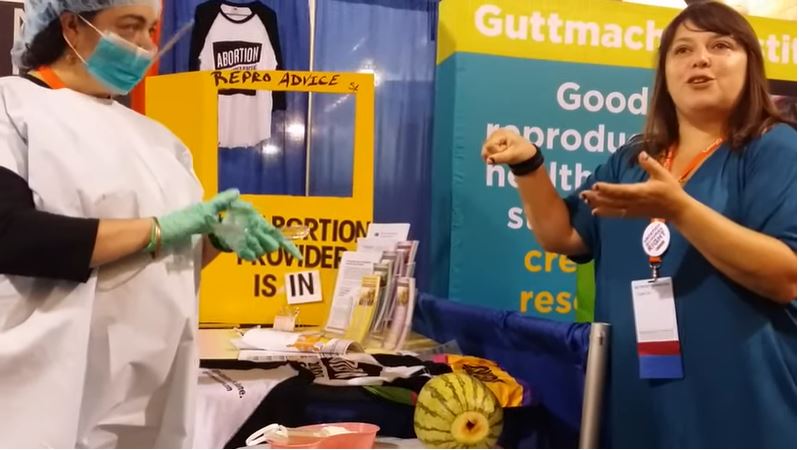 At the recent Netroots Nation convention in Philadelphia, a pro-abortion group used a watermelon in an attempt to teach attendees how an aspiration abortion on preborn child up to about 13 weeks is committed. But the presentation by Abortion Access Front was — unsurprisingly — seriously lacking in truth.

According to reporting by S.A. Miller for The Washington Times, the watermelon was meant to represent the uterus and the actual fruit inside was supposed to be the “pregnancy.” Facility consultant Jen Moore Conrow led the demonstration.

“So when you are thinking about how ginormous pregnancies are, just know that a three-month pregnancy is actually very, very small,” she told the audience. She doesn’t even dare to use the word embryo during the presentation, sticking to the word “pregnancy” to further dehumanize the preborn child. While a preborn child at this age is small, a human being’s value is not relative to her size. All humans are equal. This is what a preborn child looks like at 12 weeks:

A preborn child at 12 weeks gestation

Conrow explains that pregnant “people” will be given local anesthesia, then the abortionist will use a speculum to open the vagina so he can see the cervix. Then the cervix will be dilated. Using a cannula (which is basically a long plastic tube) and a manual vacuum aspirator, Conrow and the woman assisting her took about two seconds to complete the procedure after initially struggling to get the vacuum aspirator to work. It appears simple and painless. One audience member even said, “That’s it?” To which Conrow replied, “That’s the whole shebang. Most procedures take about three to five minutes and folks feel OK afterward.” Obviously, Conrow is leaving out some crucial information.

Some have testified that preborn babies react to instruments inserted into the womb. Here is how former abortionist Dr. Anthony Levatino describes a vacuum aspiration procedure, showing how the child is suctioned out of the womb:

According to Levatino, who committed 1,200 abortions before becoming pro-life, the suction machine typically used in an aspiration procedure has a force of 10 to 20 times more powerful than a household vacuum cleaner.

When Conrow says that people feel “OK” after an aspiration abortion, what she should have said is that typical complications include nausea, bleeding, and cramping that can last for two weeks. Additional risks include injury to the uterine lining or cervix, infection, uterine perforation, blood clots, and incomplete abortion. She should have also mentioned the not uncommon emotional effects of guilt and remorse.

Conrow then tries to minimize the act of a first trimester aspiration abortion by telling the audience that the same procedure is used in first trimester miscarriages. “The clinical management of a miscarriage and abortion are identical,” she says. In reality, abortion is the active killing of a living human being while managing a miscarriage means utilizing a surgical procedure after natural death has already occurred. There is a huge difference. Both are devastating, but abortion is a purposeful act of violence.

The truth is, nothing about the watermelon demonstration is even close to “the whole shebang.” One abortionist even admitted that when he used to allow boyfriends or husbands to accompany their partners during the abortion procedures, “they all passed out,” and one man even sued. A woman’s reproductive organs are not like a watermelon, and abortion is not the removal of the inside of a piece of fruit.

Perhaps the short amount of minutes for a procedure are all the abortion workers are concerned about, but for the women, there are endless repercussions. From physical complications to the emotional pain including regret and guilt that can occur immediately following the abortion to decades later, the true effects of abortion for the women don’t occur in those minutes inside the operating room. They can last a lifetime.

Post-abortion syndrome (a form of PTSD associated with abortion) includes an increased risk of depression along with increased risks of drug use, alcohol use, and suicide. The abortion industry never talks about this. Former workers have testified they line women up like cattle and herd them in and out for these so-called quick procedures that leave children dead and women scarred for life.

Editor’s Note: If you are suffering from the effects of abortion, support is available to help you find healing through Rachel’s Vineyard, Heartbeat International, and Ramah International.