Every girl and woman, right?

The Secretary-General expresses deep sorrow at the death of the 23-year old Delhi student who was gang-raped by six men in a moving bus in New Delhi on 16 December.  He offers his sincerest condolences to her parents, family and friends, and utterly condemns this brutal crime. Violence against women must never be accepted, never excused, never tolerated. Every girl and woman has the right to be respected, valued and protected.

The Secretary-General welcomes the efforts of the Government of India to take urgent action and calls for further steps and reforms to deter such crimes and bring perpetrators to justice. He also encourages the Government of India to strengthen critical services for rape victims.  UN Women and other parts of the United Nations stand ready to support such reform efforts with technical expertise and other support as required.

Emphasis added. We join with Secretary-General Ban in deploring this terrible case out of India. May justice be served for the victim and all victims of violence against women.

While the U.N. is certainly right to speak out in this case, they have been woefully silent about some other women who have been brutalized by violence as well. Let us hope the U.N. will listen to their secretary-general and fully seek the ideal that every girl and woman has the right to be respected, valued, and protected. 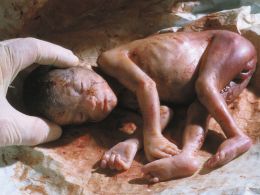