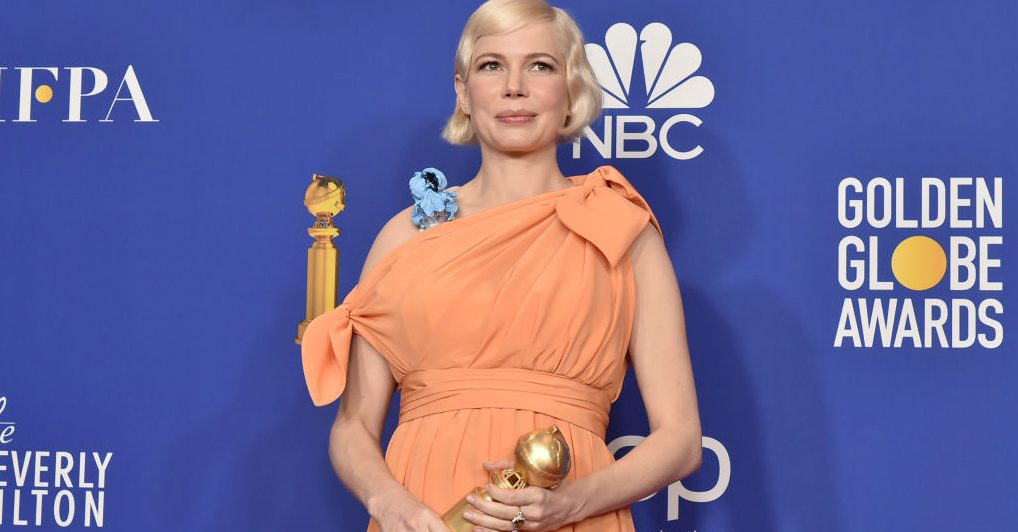 The annual Golden Globe Awards, presented by the Hollywood Foreign Press Association, was held on Sunday. Most of Hollywood’s elite were there, but one person in particular has been getting a lot of attention. Actress Michelle Williams won “Best Performance by an Actress in a Limited Series or a Motion Picture Made for Television” for her role in the FX series “Fosse/Verdon.” She accepted the award while clad in an creamy orange gown that showed off her growing baby bump — and used the opportunity to advocate for abortion, while also seemingly acknowledging her own abortion history.

Williams, who also won an Emmy for her portrayal of actress and dancer Gwen Verdon, took to the stage and gave her acceptance speech, which at first didn’t garner much reaction. “When you put this in someone’s hands, you’re acknowledging the choices that they make as an actor — moment by moment, scene by scene, day by day. But you’re also acknowledging the choices they make as a person — the education they pursue, the training they sought, the hours they put in,” she began. But then she swerved into abortion territory, and the audience quickly began cheering.

“I’m grateful for the acknowledgment of the choices I’ve made, and I’m also grateful to have lived at a moment in our society where choice exists,” she continued. “Because as women and as girls, things can happen to our bodies that are not our choice. I’ve tried my very best to live a life of my own making, and not just a series of events that happened to me, but one that I could stand back and look at and recognize my handwriting all over — sometimes messy and scrawling, sometimes careful and precise — but one that I had carved with my own hand.”

Then, she seemingly acknowledged that she had an abortion herself, and made the case that without it, she wouldn’t be successful today, saying, “And I wouldn’t have been able to do this without employing a woman’s right to choose, to choose when to have my children and with whom.”

Williams has a 14-year-old daughter, Matilda, from her relationship with actor Heath Ledger, who passed away in 2008. Her appearance at the Golden Globes was her first public appearance with her fiancé, Thomas Kail, whose child she is carrying. The seeming admission that Williams has had an abortion came as a surprise to many, yet many applauded her decision to give that abortion credit for her career.

The problem is, Williams’ insistence that she wouldn’t be a successful, award-winning actress without abortion is not only offensive, it’s grossly inaccurate and helps prop up the patriarchy. While she’s hardly the first to make this argument, it isn’t any less problematic. Far from empowering women, using abortion as a tool to advance a career does nothing but hold women back, and allow the current status quo — where a woman is punished for her fertility, essentially for not being a man — to continue. This was pointed out on social media by New Wave Feminists and others.

Abortion is not an example of feminism in action; it’s actually the exact opposite. Women are frequently coerced into having abortions by their partners and family members. Others are pressured into it by other institutions. Women who are in high school and college alike are frequently led to believe they either need to drop out of school or have abortions. Pregnancy discrimination in the workplace is alarmingly common, with women claiming to have been discriminated against when pregnant in hiring, firing, and promotions at companies like UPS, Google, Nike, and of course, Planned Parenthood.

It’s no wonder that the earliest feminists, then, were pro-life; they understood that women chose abortions not because they wanted to, but because they were vulnerable and desperate. A feminist world is not one where women must stifle their fertility because men will not accommodate them. A feminist world is one in which a woman never feels compelled to choose between her child and her education or career.

Women can defeat the odds

While Williams claims that she couldn’t be a successful actress without abortion, other trailblazers have proven otherwise. Renee Elise Goldsberry won a Tony award for her role as Angelica Schuyler in the Broadway hit “Hamilton.” When she won, she tearfully thanked her husband and her children — and said that she was able to be a mother and still win the award. Actress Catherine Zeta Jones filmed the musical “Chicago” while she was pregnant, and then won an Oscar for her role as Velma Kelly at nine months pregnant. “Wonder Woman” actress Gal Gadot was hardly a household name before taking the iconic role, yet she wowed audiences across the globe — and was likewise visibly pregnant during production, even filming battle scenes at five months pregnant. Plenty of celebrities became parents as teenagers and still found success.

There is also no shortage of other incredible women achieving incredible things while pregnant or raising children. Briana Williams is a single mother who graduated from Harvard Law School, writing a beautiful letter to her daughter saying she was able to graduate because of her. Audrey Gelman made history for being the first pregnant woman to appear on the cover of any business magazine. Serena Williams, one of the greatest tennis players of all time, won a Grand Slam tournament while two months pregnant. Olympic gold medalist Kerri Walsh Jennings won one of her gold medals while pregnant. There are countless more examples, and it’s these women who are the inspirations.

An industry that preys on women

One of the things that Williams neglects to mention is how Hollywood has historically used abortion as a tool to control its starlets and cover up abuse. Hollywood starlets like Jean Harlow, Joan Crawford, Bette Davis, Ava Gardner, and Judy Garland all had abortions, typically due to pressure from film studios. “[I]t was a common assumption that glamorous stars would not be popular if they had children,” Cari Beauchamp wrote in her book Without Lying Down. Studio heads even worked in tandem with the actresses’ families, such as in the case of Judy Garland, whose mother helped conspire to force her into an abortion. These abortions were also frequently tools to help cover up assault.

Women in Hollywood are still pressured to have abortions today. R&B singer Keke Wyatt said studio executives told her to get an abortion, but she refused. And as the Harvey Weinstein scandal shows, the story of male Hollywood executives controlling and abusing women continues today. Yet abortion advocates, like Williams, remain silent about the role abortion plays in helping to hide that.

All Williams’ statement has done is to help uphold the patriarchy. Making women believe they need abortion to be successful sells out other women, ensures that they will continue to be disempowered, and gives men in power no incentive to change. It makes Williams an accomplice to the patriarchy, not a warrior fighting against it. If Williams really wanted to make things better for her fellow women, then she should be demanding more and better — not insisting that other women be subjected to the pain and violence of abortion.