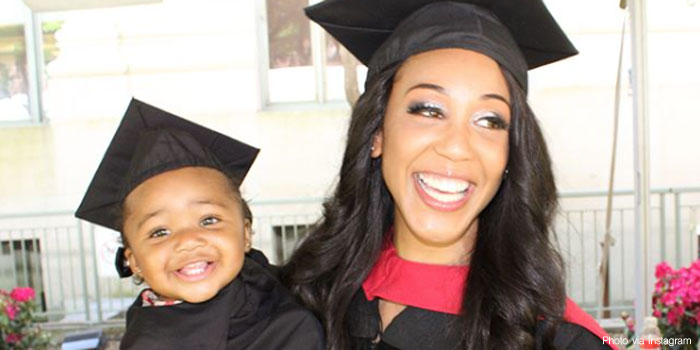 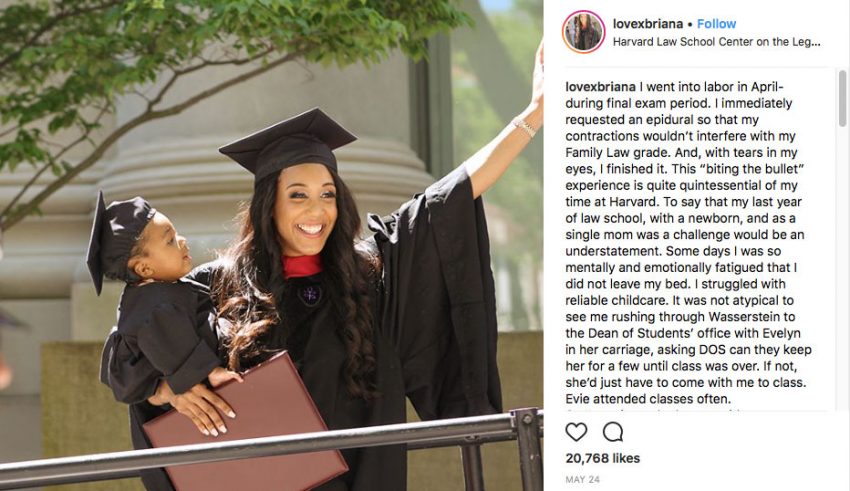 Williams does not sugarcoat how hard it was to complete her law degree as a single mom. She wrote, “To say that my last year of law school, with a newborn, and as a single mom was a challenge would be an understatement. Some days I was so mentally and emotionally fatigued that I did not leave my bed.” Williams was 23 when she gave birth to her daughter, Evelyn, and went into labor in the middle of her final exams. She shared on Instagram, “I immediately requested an epidural so that my contractions wouldn’t interfere with my Family Law grade.” What she describes as this “biting the bullet” experience became the norm for the final year of her rigorous academic program.

In an interview with Yahoo, Williams spoke candidly about the struggles she faced, saying:

There were many days that I’d go into a depression because I felt overwhelmed and let the pressure of what I was trying to do get to me. I suppose I just did what I had to do, regardless of how I felt on the inside, because I did not want people to be able to say that I had to choose between motherhood and success.

Williams, and so many courageous women like her, are shattering the myth that women “need” abortion to succeed. While Planned Parenthood and the abortion industry claim that a woman’s success depends on abortion, taking the life of her preborn child in difficult circumstances, nothing could be further from the truth. Williams, like Dorothy Osborne and so many other single moms, says that her child is the ultimate motivation for her success.

One of the challenges Williams faced as a single mom was finding reliable childcare. She describes the many days she asked the Dean of Students’ office to watch Evelyn or otherwise took her baby to class with her. Many students with children can relate. While there are beautiful examples of professors going above and beyond to help students without childcare options, ensuring that campuses are a welcoming environment for students with kids would be even better.

READ: ‘Calling off the abortion’: Single mom shares how her video saved a life

Williams is unafraid to admit her doubts, sharing:

I did not think that, at 24 years old, as a single mom, I would be able to get through one of the most intellectually rigorous and challenging positions of my life. It was hard. It hurt. Instagram can make peoples’ lives seem seamless, but this journey has been heartwrenching. However, I am happy to say that I DID do it.
Today, Evelyn in my arms, with tears streaming down my face, I accepted my Juris Doctor from Harvard Law School. At first, I was the anomaly of my [marginalized] community. Then, as a single mother, I became a statistic. Next, I pray that- for the sake of my baby, I will be an example.

Many commenters on Instagram were moved to tears, and Williams received well wishes from around the world. One follower wrote, “I have a similar story. I had to go out of school for a tad bit when I had my daughter and just now getting back. College is so hard being a single mom, it’s so tough, but this is so encouraging for me to finish med school. Thanks so much for this beautiful post!” Another wrote, “Thank you for being an inspiration for all those mothers who have heard that their child will be a huge road block in their lives. You are amazing!!”

In her viral post, Williams includes a moving tribute to her daughter: “Evelyn- they said that because of you I wouldn’t be able to do this. Just know that I did this BECAUSE OF YOU. Thank you for giving me the strength and courage to be invincible. Let’s keep beating all their odds, baby.”

Since graduating, Williams has moved to California for a position at an elite law firm in Los Angeles. The hard work is far from over, as she is currently studying for the bar. Judging by what she has accomplished so far, Williams’ many followers have no doubt of her continued success.