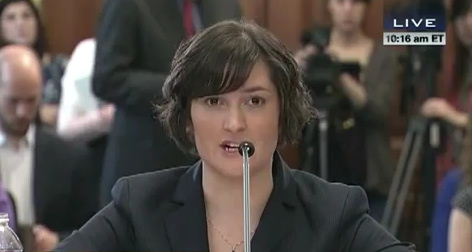 First, we have some investigative work by Mytheos Holt at the Blaze, who found a Washington Post story which suggests Fluke not only knew Georgetown didn’t cover birth control for students, but decided to enroll there specifically so she could make it a cause célèbre :

Fluke came to Georgetown University interested in contraceptive coverage: She researched the Jesuit college’s health plans for students before enrolling, and found that birth control was not included. “I decided I was absolutely not willing to compromise the quality of my education in exchange for my health care,” says Fluke, who has spent the past three years lobbying the administration to change its policy on the issue. The issue got the university president’s office last spring, where Georgetown declined to change its policy.

In other words, Sandra Fluke is no mild-mannered student blindsided by prudish administrators, but a radical who always intended to transform Georgetown’s values through any means necessary. The powers that be didn’t cave in to her demands after three years, so she chose to try her luck at imposing her will through the force of law.

Of course, that raises the question of why she didn’t make any headway. If students are really suffering the way she describes, wouldn’t it only be a matter of time before the pressure of complaining and transferring students compelled Georgetown to give in on its own?

A student group called Plan A H*yas for Choice staged a demonstration against the university health plan last year, duct taping their mouths and chaining themselves to the statue of Georgetown’s founder on the university’s front lawn. Then, a funny thing happened – nothing. We left them there.

If that’s accurate, then it would seem Georgetown’s health plan works just fine for most students, who either took the time to learn about the plan before attending or took it for granted that they’d have little need for birth control at a religious school. Contrary to Fluke’s indignant refusal to “compromise,” researching everything a school offers and asks of its students is a basic step of the college experience (especially when spending over $23,000 on an education), and there’s no such thing as a decision without trade-offs. For instance, I chose my alma mater, Hillsdale College, for the excellence of the faculty and curriculum, but I went in knowing that it was also more expensive and further from home than several of my alternatives.

Instead of building a case for Congress to liberate Georgetown students from the crushing burden of having to make informed decisions, the Sandra Fluke saga has merely underscored the need for college students, who are supposed to be in the final stages of the transition to independent adulthood, to take financial and sexual responsibility for their own lives.