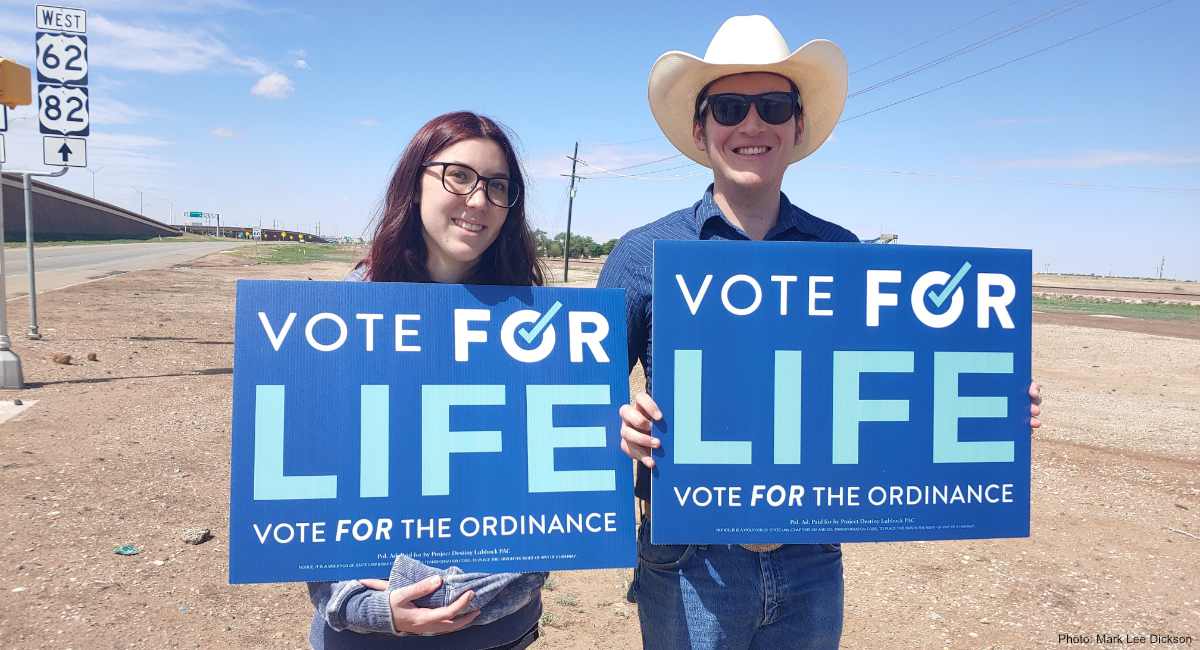 On Saturday, May 1, the citizens of Lubbock, Texas (population 264,000), voted in a landslide election to pass an enforceable ordinance outlawing abortion within their city limits. The vote was 62.64% (21,400 votes) in favor of the ordinance and 37.54% (12,860 votes) against the ordinance. In doing so, the City of Lubbock, Texas, became the 26th city in the nation to outlaw abortion within their city limits and the first city to outlaw abortion through a vote of the residents of their city. Because of the vote for life, no unborn children will be able to be murdered by abortion legally under the laws of the city of Lubbock, Texas.

The public effort to outlaw abortion in Lubbock, Texas started on August 25th, 2020 when Senator Charles Perry and State Representatives Dustin Burrows and John Frullo sent a letter to Mayor Dan Pope, encouraging him to pass an ordinance similar to one which at the time had been passed in 14 other cities throughout the State of Texas. The State Delegation’s letter was met with much criticism from Mayor Pope and the Lubbock City Council with almost every one of them publicly stating their position against the ordinance in interviews on local news and radio stations.

Instead of using their own lawyers, the City of Lubbock hired Olson & Olson, an outside law firm from Houston, to review the ordinance. The action immediately brought criticism from Right To Life of East Texas, West Texas For Life, Pro-Life Waco, and Texas Right To Life due to the fact that the Olson & Olson law firm had family ties to Planned Parenthood. To no one’s surprise, the law firm told the Lubbock City Council in a closed session meeting that the ordinance was unconstitutional. 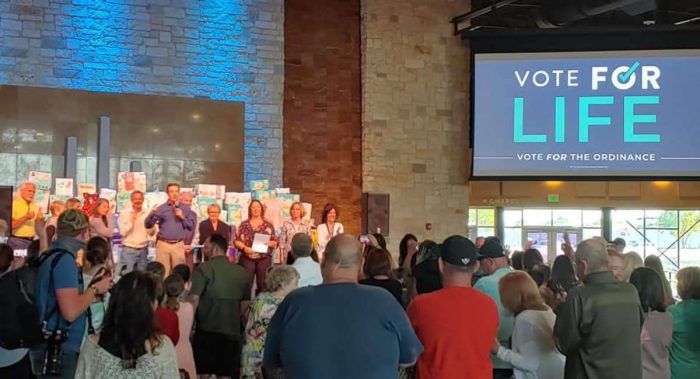 Supporters of the Vote For Life gather at a watch party held at Trinity Church in Lubbock, Texas, on the night of May 1, 2021. (Photo: Mark Lee Dickson)

The amount of verified signatures needed to force the vote was 3,651 verified signatures. In two weeks, over 5,000 signatures were collected by the people of Lubbock and a hearing was set for November 17, 2020, forcing the council to listen to their residents and vote for or against the ordinance.

And, on November 17, 2020, over 150 residents of the Lubbock community spoke to their elected city officials about the ordinance, with the majority speaking in favor. However, the Mayor and City Council voted 7-0 against the ordinance under the reasoning that Roe v. Wade is the ‘law of the land’ and must be followed. Since the vote of the council was forced by the Initiative and Referendum process, this allowed for Lubbock residents to take the opportunity to get the ordinance on the ballot and to vote on the ordinance themselves on May 1, 2021.

Between the time that Lubbock was first presented the ordinance and the citizens of Lubbock were able to vote on it, a total of 11 cities passed ordinances outlawing abortion within their city limits. These cities included: New Home, Morton, Ackerly, Grapeland, Goldsmith, Carbon, Gorman, Murchison, and Latexo in the State of Texas and Hayes Center and Blue Hill in the State of Nebraska. While the citizens of Lubbock had to wait nine months for this reality to be birthed, the results of the May 1st election welcomed Lubbock into the world as the 26th city to outlaw abortion in the United States.

Over the course of several months, Lubbock citizens who support the ordinance and those opposed have expressed their thoughts in public forums and engaged in passionate debate on this sensitive issue. Today, voters made it clear that Lubbock will become the next sanctuary city for the unborn. I am encouraged by the significant voter turnout.

On behalf of the City Council, our duty as elected officials is to begin the process in adding the approved ordinance to the City of Lubbock Code of Ordinances, as directed by the Lubbock City Charter. The Lubbock City Council, per state law, will canvass the votes from this election on Tuesday, May 11, with a likely ordinance effective date as early as June 1.

The Lubbock Ordinance, like the other Sanctuary Cities for the Unborn ordinances, is enforceable by two major enforcement mechanisms: public and private. The public enforcement mechanism establishes fines against the abortionist and anyone who aids and abets the abortionist for any abortion which takes place within the City limits of Lubbock. The ordinance is clear that these fines cannot be imposed unless it is determined that the individual seeking to impose the penalty upon the one who committed the unlawful act will not create an “undue burden” on women seeking abortions, the person, corporation, or entity who committed the unlawful act of abortion lacks standing to assert the third-party rights of women seeking abortions in court, or Roe v. Wade and Planned Parenthood v. Casey are overturned. This is only one section of the ordinance and the enforceability of this one section is not immediate, but dependent upon other factors. 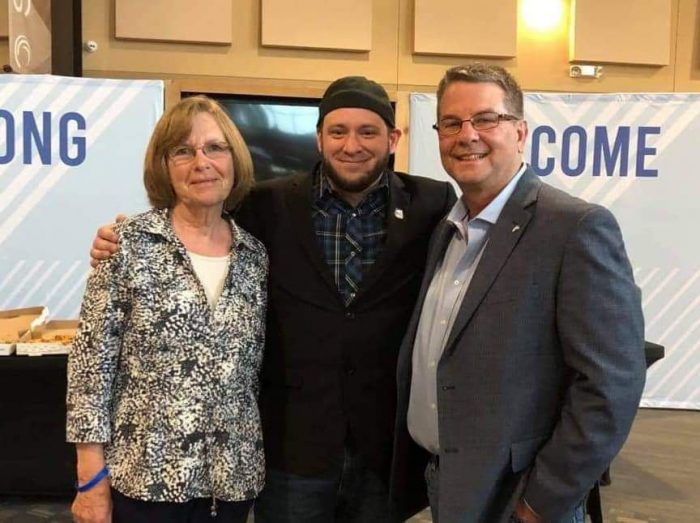 West Texas For Life member Dorothy Boyett, who led the initiating committee to get the ordinance on the ballot, takes a picture with Sanctuary Cities for the Unborn Initiative Founder Mark Lee Dickson and State Senator Charles Perry after hearing the news of the outcome of the vote for life. (Photo: Mark Lee Dickson)

Unlike the public enforcement mechanism, the private enforcement mechanism is immediately enforceable. This section states, “Any person, corporation, or entity that commits an unlawful . . . other than the mother of the unborn child that has been aborted, shall be liable in tort to a surviving relative of the aborted unborn child, including the unborn child’s mother, father, grandparents, siblings or half-siblings. The person or entity that committed the unlawful act shall be liable to each surviving relative of the aborted unborn child for: (a) Compensatory damages, including damages for emotional distress; (b) Punitive damages; and (c) Costs and attorneys’ fees.” Section F-4 clearly states, “The citizen-suit enforcement action . . . may be brought on or after the effective date of this ordinance.”

The ordinance does not define abortion to include birth control devices or oral contraceptives and the act is not considered an abortion if it is done with the intent to “save the life or preserve the health of an unborn child, remove a dead unborn child whose death was caused by accidental miscarriage, or remove an ectopic pregnancy.” In addition to these exceptions, the ordinance also gives a life-of-the-mother exception for doctors under affirmative defense since the ordinance does not penalize the mother of the unborn child which has been aborted.

While the ordinance was originally hoped to be passed before Planned Parenthood started committing abortions at their Lubbock facility, abortions have been offered there since Thursday, April 15. Because the Lubbock Ordinance Outlawing Abortion was passed after abortions were offered in Lubbock, this makes Lubbock the first city in the nation to pass an ordinance outlawing abortion in a city where abortions are already being committed.

If the City of Lubbock faces a lawsuit as a result of the ordinance, Attorney Jonathan F. Mitchell, the former Solicitor General of Texas, has offered to represent the city at no cost to the city or taxpayers. In May 2020, when seven cities in East Texas that had passed the ordinance were sued by the ACLU, Mitchell represented the cities, and after three months, the ACLU withdrew its lawsuit. The lawsuit cost the cities and taxpayers nothing — and abortion remans outlawed in every city that was sued.

The Sanctuary Cities for the Unborn Initiative continues at a rapid pace, as petitions to outlaw abortion are coming in from residents of more cities across the U.S.