The state of Texas has officially defunded Planned Parenthood from its Medicaid program, a decision that was announced last year but took some time. A final notice has been sent, mentioning undercover videos which show Planned Parenthood employees discussing how they harvest aborted baby body parts. The Texas Tribune, which obtained a copy of the notice, reported:

Planned Parenthood had previously received $3.1 million in Medicaid funding, but those dollars will be nixed in 30 days, according to the notice which was obtained by The Texas Tribune.

That cut-off day will only be delayed if the organization appeals the state’s decision in the next 15 days by requesting an administrative hearing with the Texas Health and Human Services Commission. But Planned Parenthood officials say they will instead turn to the courts to block the cuts.

In a letter to Planned Parenthood Gulf Coast, Texas officials said the abortion giant’s gruesome fetal parts trafficking practices, as well as Medicaid fraud, led to the termination in funding.

… [T]here is reliable information indicating a pattern of illegal billing practices by Planned Parenthood affiliates, including you, across the State.

In Texas there are 38 Planned Parenthood locations, while the state has 732 health centers. 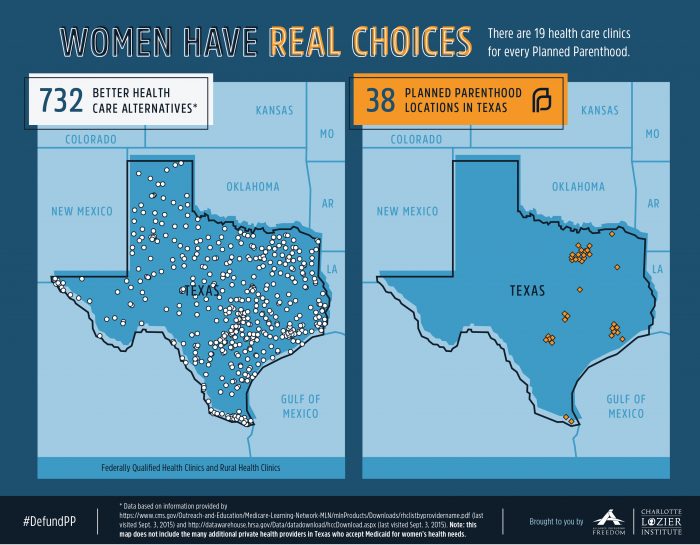 Despite the cry from Planned Parenthood and the media, women will still have places to go to for health care services. When the Obama administration canceled programs in 2012, Texas still managed to fund women’s health care. Texan Abby Johnson, formerly a Planned Parenthood director and now pro-life activist, shared in a Facebook post: “Texas established a program called Healthy Texas Women that has almost 5,000 Medicaid providers.”