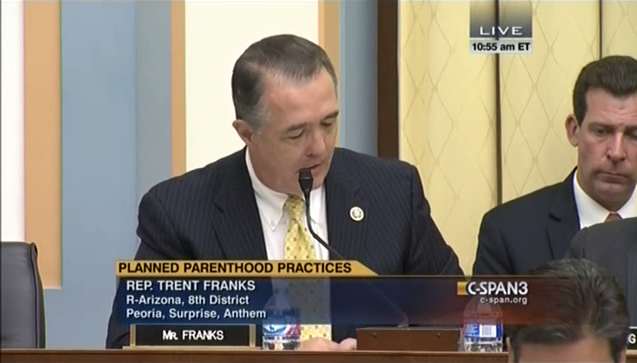 In a riveting opening statement during the first hearing on Planned Parenthood’s trafficking of fetal body parts, Arizona Congressman Trent Franks decried the atrocities of the abortion business and advocated for the life and preciousness of preborn children.

“I beg you to open your own hearts and ask yourselves, ‘What is so liberating about brutally and painfully dismembering living, helpless, little human babies?'” The congressman prefaced his speech before the U.S. House Judiciary Committee with the sacred words that framed the founding of America:

“The United States of America is a unique nation that is premised on the foundation that all of us in the human family were created equal, and that each of us is endowed by our Creator with this unalienable right to live.”

He stated, however, that the undercover videos by Center for Medical Progress have shed light into human rights abuses by abortion giant Planned Parenthood against the weakest members of society. Not only have top-level executives been caught on camera bartering over the bodies of aborted children, an eyewitness inside a Planned Parenthood facility describes carving the face of a baby boy with a beating heart.

“These video recordings irrefutably reveal officers of Planned Parenthood haggling over the price of these little organs and body parts, and casually describing ways of killing these little babies— often using much painful methods, such as partial-birth abortions— to make sure the salable organs of these babies remains undamaged.

“Mr. Chairman, I find it so crushingly sad that the only time that this little baby was ever held by anyone in his short life was by those who cut his face open and took his brain.”

Franks likened the barbarism by Planned Parenthood executives to the atrocities unearthed in abortionist Kermit Gosnell’s “House of horrors.” Gosnell was convicted of murder for killing babies outside of the womb, snipping their necks with scissors.

“Yet the President of the United States of America and many members of Congress have not uttered a single syllable against the gut-wrenching atrocities of Kermit Gosnell and Planned Parenthood. For God’s sake, is this who we truly are?”

Franks noted that last year alone, 18,000 late-term babies were killed in abortion facilities across the country.

“Many of them screamed as they died, but because it was amniotic fluid going over the vocal cords instead of air, we couldn’t hear them. It is the worst human rights atrocity in history of the United States of America.”

Franks called for the defunding of Planned Parenthood and an end to the Democrat filibuster of the Pain-Capable Unborn Child Protection Act in the U.S. Senate.