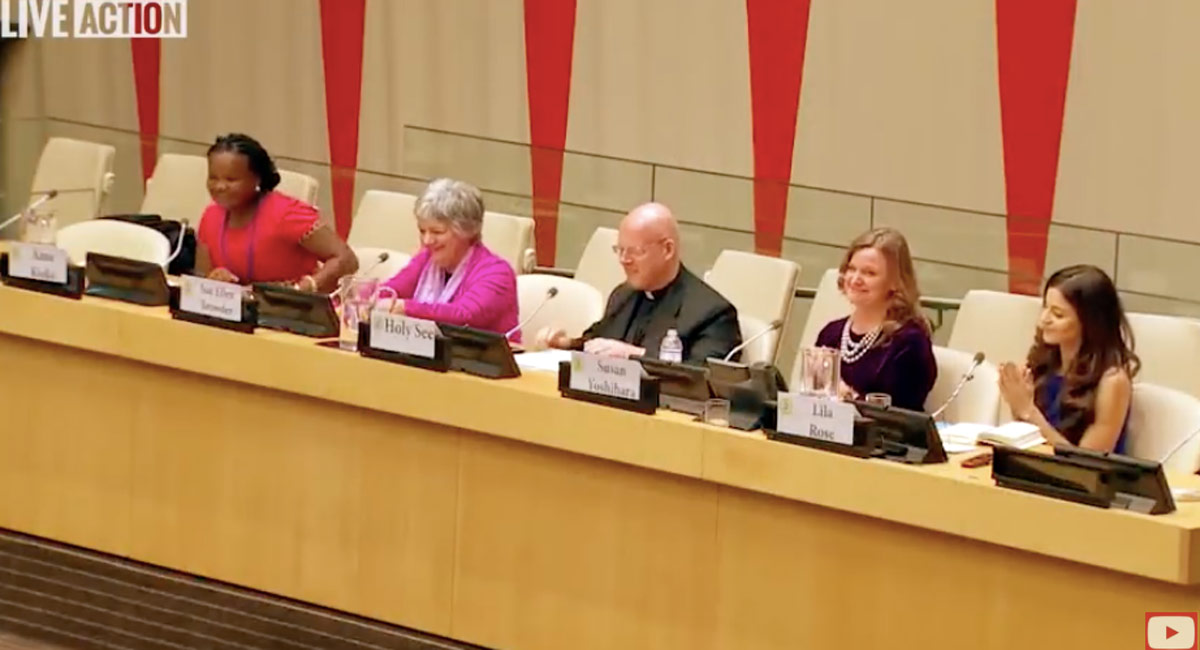 On March 19, the United Nation’s 63rd session of the Commission on the Status of Women featured a side event entitled “Protecting Femininity and Human Dignity in Women’s Empowerment and Gender Equality Policies Today.” The event was co-sponsored by the Permanent Observer Mission of the Holy See to the United Nations and the Center for Family & Human Rights (C-FAM).

The panel featured experts, including Live Action President Lila Rose, discussing how women’s unique gifts should be celebrated and how the sexual revolution and abortion have undermined true women’s empowerment. At a time when pro-abortion groups in the U.N. have successfully lobbied to have abortion declared a “human right” — leading the U.N. Human Rights Committee to declare that nations “must” legalize abortion — the voice of pro-life feminism is critically needed.

The panel opened with Sue Ellen Browder, the author of the book “Subverted: How I Helped the Sexual Revolution Hijack the Women’s Movement.” Browder, a former writer for Cosmopolitan Magazine for 20 years, has since worked to uncover how pro-abortion men hijacked the women’s movement to push for the legalization of abortion. She explained at the panel, “The sexual revolution and the feminist movement were two radically different movements.” The former was divisive, while the latter was unifying for women. How then did the two very different movements become joined to form what many people think of the only feminist movement: pro-abortion feminism?

Browder discusses some of the powerful pro-abortion lobbyists who convinced leaders in the feminist movement to accept abortion — alienating many feminists, who, like most Americans, were opposed to abortion. Browder offers a startling statistic demonstrating the difference in numbers of those who supported abortion and those who opposed it, saying, “By 1979, NOW [National Organization for Women, a pro-abortion group] had 100,000 members. Pretty good, right? The National Right to Life Committee, which represents the pro-life family feminist movement had 11 million members, 110 times as many as NOW.”

Browder encouraged listeners to reject the pro-abortion feminism now seen as the default in favor of an authentic, pro-life feminism.

Women don’t need to be like men to succeed

Next on the panel, Dr. Susan Yoshihara shared a story of how being one of very few women to serve as an active-duty U.S. Navy helicopter pilot opened her eyes to her unique contributions as a woman. Dr. Yoshihara, who served in the military for 20 years, is now senior vice president for research and director of the International Organizations Research Group at the Center for Family & Human Rights.

Dr. Yoshihara explained, “The women’s movement, the sexual revolution, left some with the wrong impression that to be successful in a man’s world, we need to leave our femininity at the door.” She gave an eye-opening illustration of this fact, saying, “I’ll never forget the day I was teaching one of my workshops to a room full of senior flag and general officers from women all over the world and I asked them to describe a time when being a woman was an asset in their career…. A two-star American general stood up and said, ‘In my 32 years, no one has ever asked me this.’”

Far from saying women should not have ambitions, Dr. Yoshihara encourages women to pursue success as women, viewing femininity as the important contribution to the advancement of military and corporate environments that it is.

Next, Anne Kioko, campaigns manager Africa at CitizenGO, explained how the international abortion lobby has ignored and undermined the real needs of developing nations in favor of implementing abortion. Kioko, who grew up in a village in Kenya, speaks movingly about the acute need for clean drinking water, hospitals, and schools.

Despite these needs, which lead to tremendous hardship and loss of life, global elites are often more concerned with implementing so-called “family planning programs” and abortion in developing countries. Kioko points to the recent example of the abortion group Marie Stopes International, which illegally advertised abortions. Marie Stopes is a partner in the United Nations Population Fund. She said abortion groups at UN discussions are “pretending to represent the woman in the grassroots.” To resounding applause, Kioko proclaimed, “It is time we brought the woman from the grassroots to the table. We need to hear from the women themselves, not from these organizations like Marie Stopes.”

Lila Rose, president of Live Action, closed the panel discussing how our view of motherhood affects the way we view women and the next generation. She said, “We are here because we acknowledge that there is a global crisis in how women are seen and treated by policies that are pushed by some of the most powerful nations in the world and wealthiest nations in the world.”

Rose noted that the pro-abortion policies pushed around the world are founded on the premise that “motherhood is antithetical to women’s advancement.” She noted that each year, 27 million girls are killed in abortions worldwide, some of them specifically because they are girls killed in sex-selective abortions.

When a UN youth representative asked the panelists how they address a “woman’s right to choose,” Rose responded that we have to define what she is choosing. She said, “We use these phrases and these words, and these were invented carefully to mislead people.” Rose continued, “If everybody here agrees, and I think they do, that… we know that it’s a life in the womb and that he or she is innocent and that an abortion ends her life, then it is never right to commit an abortion.”

Watch the full video of the panel below: