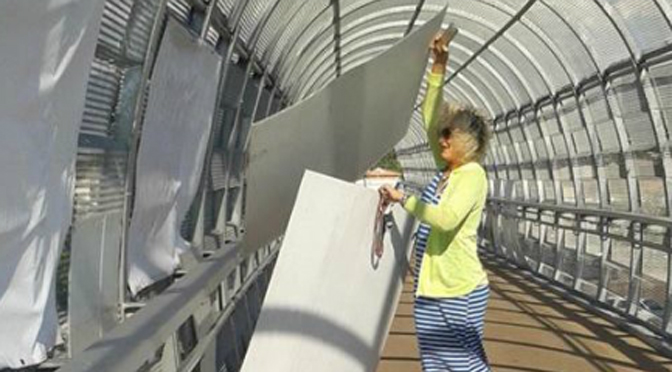 Life News reports that pro-abortion passerby and her son attacked a group of pro-lifers in Albuquerque, New Mexico, this week, throwing both their signs and a member’s cell phone off an overpass.

Bud Shaver, a member of the local pro-life group Protest ABQ, told Life News that members have a weekly practice of holding signs above the road “to peacefully expose the violence that abortion inflicts on pre-born children in the womb.” In video the group captured of the Wednesday incident, a woman approached the protestors, grabbing some of the signs and angrily condemning them for “showing gross, indecent images when children are coming.”

One member protested that she was stealing, to which the woman replied, “I’ll tell you what, I’ll leave the signs right here for you,” and threw them off the overpass. Shaver notes that the signs had an impact on the woman’s son, who responded, “Look at that dead baby, somebody killed that,” but ultimately “follow[ed] the example of his mother and join[ed] in the attack.”

Protest ABQ reported the incident to the police, but the perpetrators remain unidentified. According to Shaver, “Both the woman and her son were sporting local Sandia Preparatory School apparel.” At their website, the group encourages anyone who recognizes them to email Tara Shaver at tara@defendinglife.org.