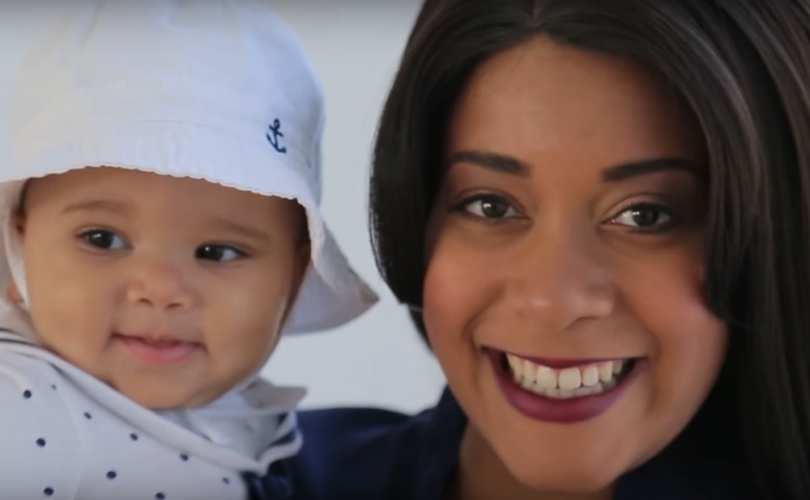 (LifeSiteNews) — When Louise found out her rapist had impregnated her, she chose life for her baby.

In a video, she shares why.

“I was raped by somebody I knew,” Louise begins.

“Innocent life came from one man’s intent to hurt me,” she explains. “But my baby hasn’t hurt me. She’s provided me with healing and growth and new experiences that I never knew could happen in my life. So she’s not going to pay for what one man’s intentions were.”

“I also knew that there’s already a heart beating. There’s already a life there,” she adds. “And for me to go and intentionally take away someone’s intent to life, that wouldn’t sit well with me personally.”

“When people say abortion is needed in cases of rape, I feel that is very unfair,” Louise continues. “If your body has already started to create life, undoing that process seems very detrimental.”

“I’m so grateful I made the decision to have my daughter, because she’s brought me so much joy,” Louise shared. “Every day I wake up to a beautiful smile, and had I not made that decision, I would have been left with just a disaster on my heart.”

Louise goes on to say that “becoming a mother has changed me in ways I never imagined. I feel like the most optimal version of myself. … I’ve drawn out a lot of strength I didn’t know was there.”

The powerful video was produced by Choice42 (as in “Choice for Two”), a Canadian pro-life organization started by the Pregnancy Help Centre of Durham.

“We aim to change public opinion about the value and humanity of pre-born children,” director Laura Klassen told LifeSiteNews.

“We want to show women that they are strong enough to choose LIFE for their children, and we have Canada’s largest database of pregnancy support organizations that can help them to do it,” Klassen said.

“We filmed Louise’s story because people always use rape as one of the main reasons for why women ‘need’ abortion,” Klassen told LifeSiteNews. Her organization encourages women to realize that “though it is their choice, they are making a choice for two.”

“My daughter is my angel,” Louise said. With the video, she posted, “I’ve broken my silence now. My angel will know her mother stood up for what is right.”

Choice42’s slogan is “Make A Choice You Can Both Live With.”

“My daughter brings me a lot of hope for the future,” Louise shared, “to let me know that not every disaster has to bring traumatic pain to where you can’t cope. It actually can bring beauty.”

“Canada does not value pre-born babies at all, as is reflected by our total lack of abortion laws,” she said. “Abortion is government funded and our society pushes abortion as the best option for a woman dealing with an unintended pregnancy.”

“We know the harm abortion causes babies and women, and we are dedicated to promoting life options,” Klassen said.

“What I would say to a woman who has just found out she’s pregnant as a result of rape, is that there is hope,” Louise advised. “There is hope beyond the traumatic experience you’ve been through. … Don’t give up.”

“If you survived such a traumatic experience — and you were gifted with a miracle — then clearly you have more potential than you’ve ever imagined.”

“You can look for the beauty in the disaster,” Louise concluded, pointing to her daughter. “She’s my beauty.”

Editor’s note: This article was originally published at Lifesite News and is reprinted here with permission.