Many who have been part of the pro-life movement for a while have heard the argument, “if we ban abortion, women will die from back alley, illegal abortions” countless times. This has always been a common pro-choice argument. Pro-choice activists claim that tens of thousands of women died every year before Roe v. Wade when the actual number was a fraction of this.

In this article, Carole Novielli debunks the claim that thousands died from illegal abortions before Roe. She also documents some of the times former Planned Parenthood president Leana Wen made false statements about illegal abortion deaths. As recently as 2019, Wen was still claiming that thousands of women would die if Roe was overturned.

But now, organizers of a major pro-choice event are sending a very different message. The Women’s March, a pro-abortion march that took place on October 2, had some eyebrow-raising instructions on its website. Under the heading, “What should I not bring” it says:

“Coat hanger imagery: – We do not want to accidentally reinforce the right wing talking points that self–managed abortions are dangerous, scary, and harmful.” 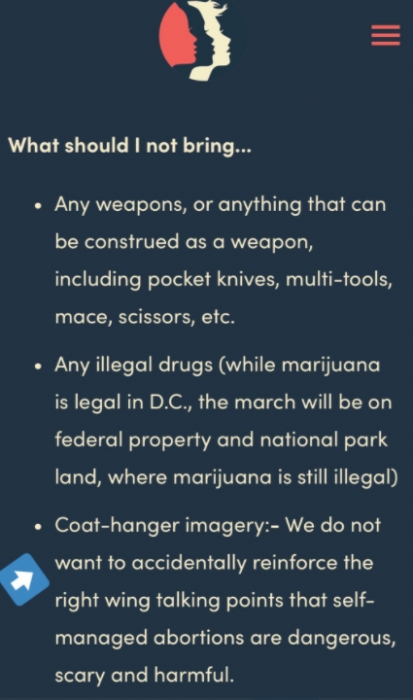 It seems like the claim that illegal, self-managed abortions are “dangerous, scary, and harmful” has somehow gone from being a pro-choice talking point to being a pro-life one.

In recent years, the abortion industry has turned some of its focus to telemedicine abortions, where women can receive abortion pills without ever receiving a medical exam from a doctor at the abortion facility. Now, in some cases, those pills are available through the mail. While the U.S. Food and Drug Administration used to have a longstanding rule that women had to receive the abortion drugs from a certified provider at a clinic, hospital, or medical office, those rules have been bypassed due to the COVID-19 pandemic. And the FDA, under pressure from pro-abortion legislators, is considering removing the safety rules altogether.

Despite the fact that it is easier than ever to get the abortion pill, these DIY abortions are extremely dangerous. One study found that they are four times more dangerous than surgical abortion. And it is emergency rooms — not abortion providers — that are dealing with the lion’s share of resulting complications, like hemorrhaging.

Despite the risks, the pro-choice movement continues to advocate for these self-managed abortions, with women obtaining abortion pills on their own, to abort with no medical supervision.

It is now pro-lifers who are saying illegal abortion is dangerous, and abortion supporters who are promoting it.