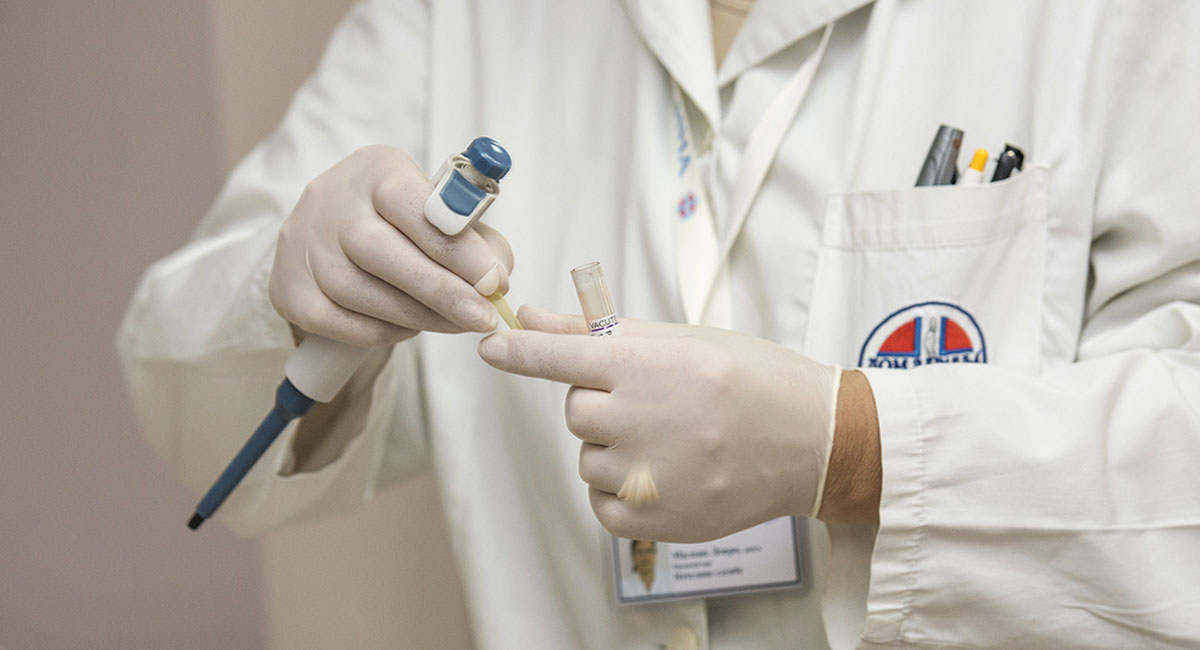 Years of research into the abortion industry has revealed a long history of abuses against women — not just in the way that they deceive women, or the way they kill living human babies in the womb, but also in the most sexually despicable ways imaginable. Some of the cases are so graphic and horrific that it makes them difficult to share — but women need to know that many of these so-called “doctors” in the industry are not safe, in more ways than one. Below are three Florida abortionists, some of whom are quite possibly still committing abortions despite having sordid and predatory histories.

South Florida abortionist Theodor (Ted) Lehrer’s wife alleged that he forced an abortion on her against her will after she refused his demands for sex. He was a member of the National Abortion Federation… and as part of my investigations, I contacted NAF, asking where I could obtain an abortion. NAF referred me to his facility.

A report by the Miami Herald at that time detailed the allegations:

Lehrer’s wife gave authorities this account of the incident: Sunday night, she was reading in a spare bedroom about 11:20 p.m. when Lehrer came into the room, handcuffed her, dragged her into the bathroom and strapped her to a portable table, she said. She pleaded with him not to rape her, she said. He placed a gauze pad over her mouth but removed it when she feared she would suffocate, she said. Lehrer then had sex with her, she said. She thought the incident was over, but he then performed the abortion. She said that her husband told her he was giving her a local anesthetic but that she felt no injection, only excruciating pain.

… She pleaded with her husband to stop…. At one point, she broke free of tape holding her down. Lehrer threatened her with a syringe, saying he would inject her with a sedative, knowing that she had bad reactions to sedatives, she said. 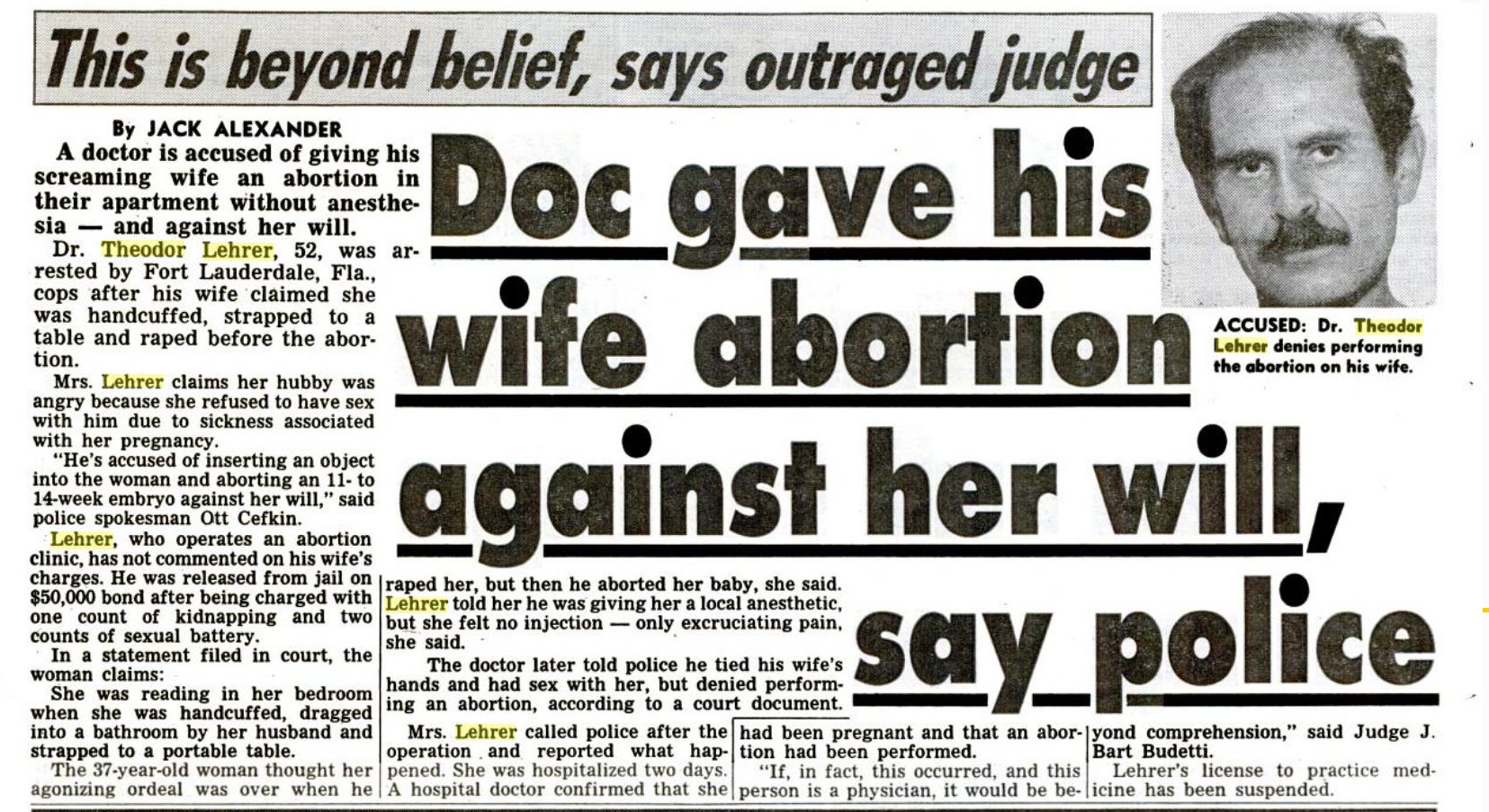 A few days later, I called NAF again and told them I was holding news articles about the doctor’s arrest — and without even attempting to verify the story, the person I spoke with assured me that the “allegations” against Lehrer were made up by “anti-choicers.”

In 1989, Lehrer’s wife dropped the charges, after reportedly becoming very ill with Hodgkin’s Disease. Her doctor said that she was not physically or psychologically able to testify against her ex-husband and if she did, it would cause irreparable harm. As a result, the state’s Department of Professional Regulations decided not to proceed with a hearing. 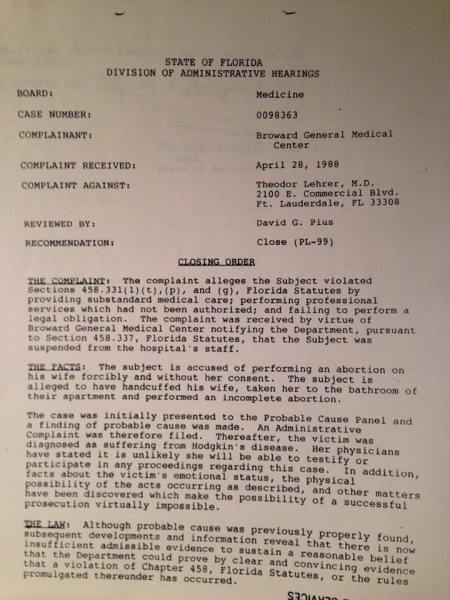 Currently, Lehrer has an active license with the State of Florida and continues to commit abortions at the All Women’s Center abortion facility in Ft. Lauderdale. His website shows that he is a member of the Association of Reproductive Health Professionals, the National Abortion Federation, and other medical organizations. 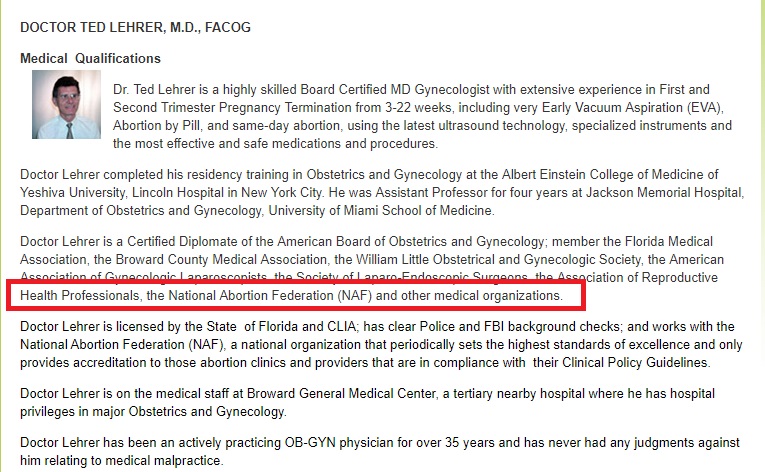 Abortion doc who forced abortion on wife a NAF member

Nabil Ghali is a circuit riding abortionist who at one time frequently traveled from Ohio to Kentucky and Florida despite being previously convicted on several counts of unlawful sexual transaction with a minor (a 14-year-old female neighbor) and testimony that he had improperly touched a five-year-old child.

In his op-ed, The Sisterhood of Silence, pro-choice author William Saletan noted that “a year after Dr. Nabil Ghali, the clinic’s convicted sex offender, lost his license to practice medicine in Florida, the Department of Health and Rehabilitative Services had granted him a license to open another abortion facility.”

The Sisterhood of Silence on abortion (Image credit: Slate)

There were even more notorious cases, such as admitted pedophile abortionist Ronald Tauber, who opened Orlando’s first abortion facility. In his committing of legal abortions, he killed a woman named Gloria Small who bled to death from a perforated uterus he caused. Later, Tauber relocated to Michigan, where his license to practice osteopathic medicine in that state was revoked following his conviction of first degree criminal sexual assault and second degree criminal sexual conduct after assaulting a six-year-old child. 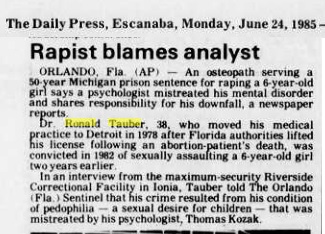 In an interview Tauber gave with a Florida media outlet after his arrest, he described “about 700 incidents with girls,” the paper wrote. He was arrested twice, once in the case of the previously mentioned six-year-old, and the other after he tried to grab a 12-year-old child riding her bicycle past him. The abortionist told the paper that he had dreams of getting out and going back into medical practice.

”When I see young girls . . . I feel like an electrical shock through my body, a tickling in my genital area,” he was quoted as saying.

Almost as disturbing is the fact that in many states, there are few laws regulating abortions on minors, and abortionists like this just might have easy access to vulnerable girls. 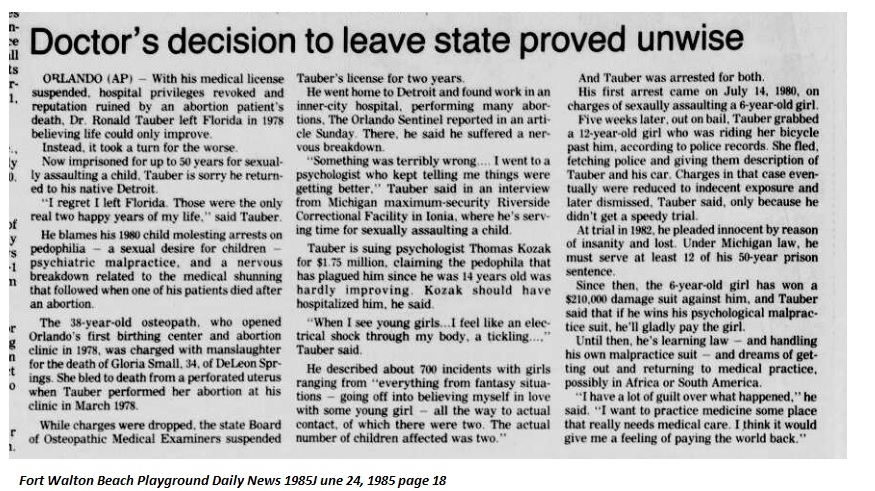 Tragically, these are only a few cases of abortionists who are also predators. There are more to come.