In his “What about Abortion?” video, VeggieTales creator Phil Vischer and his podcast co-host Skye Jethani claimed that  abortion numbers today are about the same as they were “every year” since the 1930’s when they were “illegal.” Today, nearly a million abortions are committed each year, according to figures from the Guttmacher Institute. Was this truly the case even before Roe v. Wade? The short answer: absolutely not.

But even after those laws were passed in the 1930’s doctors still performed an estimated 800K abortions every year. That’s about the same number that’s happening today. So the idea that before Roe abortion was illegal and rare in America – it’s just not true… That’s also why overturning Roe wouldn’t be a decisive win…

The abortion industry has long claimed that anywhere from 200,000 to over one million mostly illegal abortions were committed annually prior to the 1973 Roe v. Wade Supreme Court decision.

We may never know the real number, because prior to 1969, there was no official reporting mechanism to track abortion — which makes the video’s claims even more puzzling. Live Action News previously noted that abortion’s legalization increased the number of abortions. According to the Centers for Disease Control and Prevention (CDC), “After nationwide legalization of abortion in 1973, the total number, rate (number of abortions per 1,000 women aged 15–44 years), and ratio (number of abortions per 1,000 live births) of reported abortions increased rapidly, reaching the highest levels in the 1980s before decreasing at a slow yet steady pace.”

Prior to Roe v. Wade, a handful of states had decriminalized abortion and in those states it was obvious legalization increased abortion. In addition, reported data reveals the number of legal abortions did not exceed one million until several years after Roe was decided.

Where did the numbers originate?

One of NARAL’s  co-founders, Lawrence Lader (the “Father of Abortion Rights“) wrote in his 1966 book, “Abortion”:

In 1957 a conference of experts sponsored by Planned Parenthood Federation estimated that US abortions could run from 200,000 to 1,200,200 annually. Dr. Christopher Tietze, of the National Committee on Maternal Health, who headed this statistical panel, considers 1,200,000 the most accurate figure today. Dr. Harold Rosen, of the John Hopkins University Hospital, editor of an authoritative study, Therapeutic Abortion, recently raised the estimate to 1,500,000.

Tietze was a senior consultant to the Center for Policy Studies of the Population Council, a eugenics organization founded by John D. Rockefeller III, later responsible for bringing the abortion pill into the United States. The national conference mentioned by Lader above was organized by Planned Parenthood medical director Mary Calderone before the organization began committing abortions until 1970 under the direction of eugenics proponent Alan F. Guttmacher. Calderone acknowledged the number of illegal abortions was never likely to be learned, and said abortion “whether legal or illegal, is a traumatic experience….”

A Yale Law Review of the conference’s assessment noted the numbers cited by the attendees depended “upon assumptions”:

[…P]lausible estimate of the frequency of induced abortion… could be as low as 200,000 and as high as 1,200,000 per year, depending upon assumptions made as to the incidence of abortion in the total population as compared with the restricted groups for which statistical data are available and upon the assessment of the direction and magnitude of bias inherent in each series of data.”

The Committee was forced to conclude that “there is no objective basis for the selection of a particular figure between these two estimates as an approximation of the actual frequency.”

By 1967, the year both Colorado and North Carolina decriminalized abortion (Mississippi had done so in 1966), researchers used data from NC to estimate 699,000 induced abortions for 1955 and 829,000 for 1967. The totals were again based on assumptions that North Carolina data could be extrapolated to the entire United States.

When did abortion reporting begin?

According to Perspectives in Reproductive Health, published by the Guttmacher Institute, “[T]he Population Council, The Alan Guttmacher Institute and the Centers for Disease Control and Prevention (CDC)—collaborated to gather data by conducting what became known as abortion surveillance…”

In 1969, the CDC began its abortion surveillance branch to document the number and characteristics of women obtaining legal abortions. By this time 10 states had decriminalized abortion. In that report the CDC acknowledged, “The need for abortion surveillance is based on a lack of accurate incidence, morbidity and mortality data.” It goes on to state, “The incidence and prevalence of induced abortion are unknown… Abortion-related morbidity is also unknown…” Planned Parenthood’s former “special affiliate,” the Guttmacher Institute, did not publish abortion data until 1973.

In other words, the previously mentioned estimate of 200,000 to 1.2 million abortions prior to Roe is wholly unsubstantiated.

How many abortions occurred in the first few years?

According to the CDC, in 1969, there were an estimated 22,670 abortions reported. As more states began to legalize abortion, the numbers climbed dramatically and by 1970, the CDC reported 193,491. The list went on: 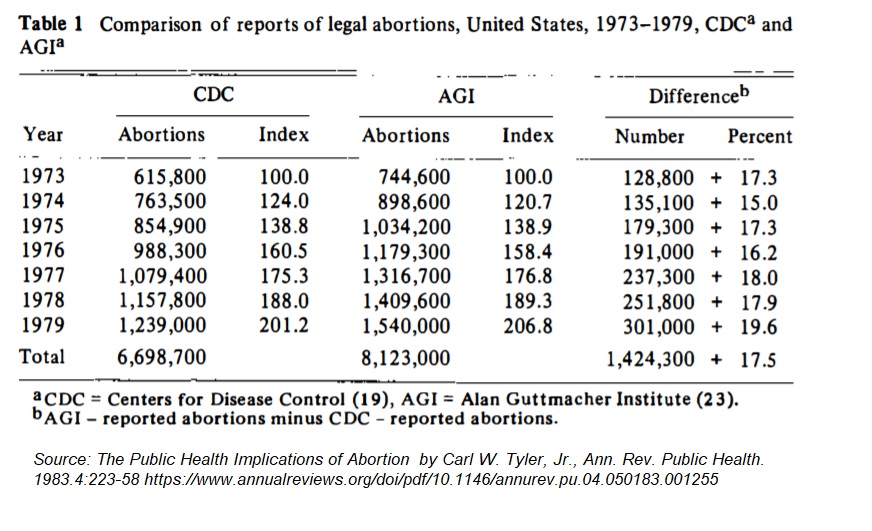 According to the previously mentioned Perspectives article, abortion numbers were not the only category to increase over time, “The proportion of women having abortions who were nonwhite increased between 1972 and 1999 (from 23% to 44%), as did the proportion who were unmarried (from 70% to 81%).”

What about deaths from illegal abortion?

Live Action News previously documented how the abortion lobby falsely inflated illegal abortion-related deaths by claiming hundreds of thousands of women died annually from illegal abortions, in a deliberate effort to push abortion on the nation.

To date, there is no federal standard for abortion reporting within the United States.

According to the Charlotte Lozier Institute, “Abortion data collection is implemented and maintained by the states, some of which choose not to collect data on abortion procedures. Those that do can voluntarily share their data with the U.S. Centers for Disease Control and Prevention (CDC) to be included in national reports, but because the CDC receives only aggregate data, the information in the national reports is limited. Additionally, the CDC reports are issued on a delayed timetable… rendering the report of limited value in assessing current trends.”