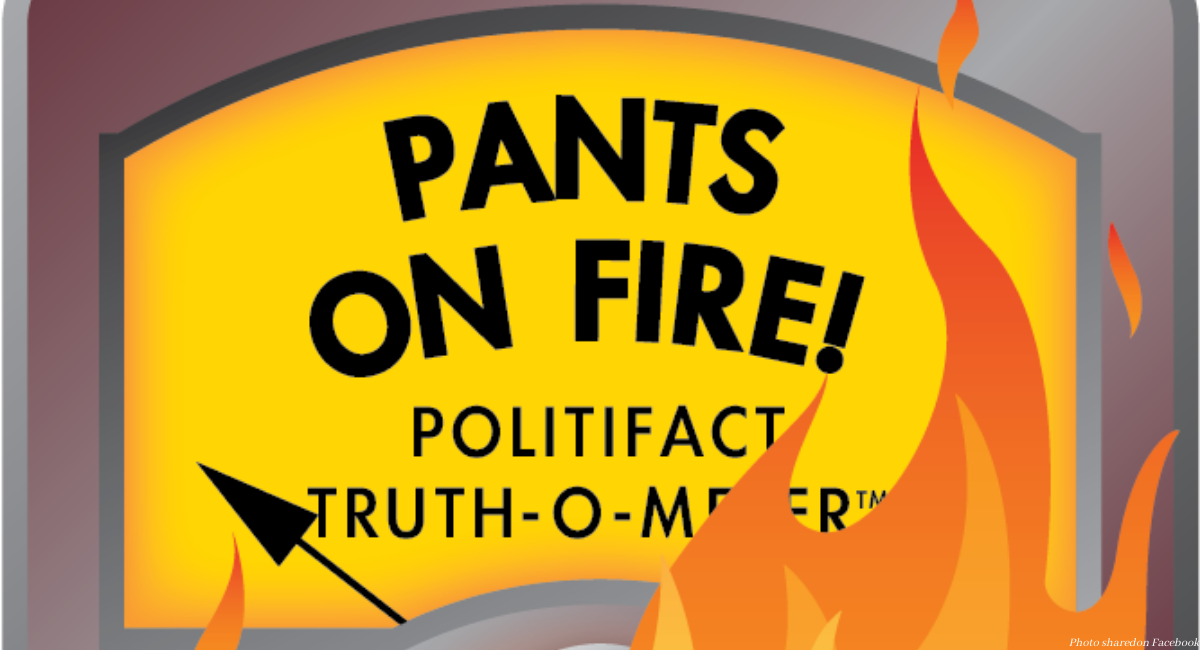 The claim was posted October 2, then flagged as “part of Facebook’s efforts to combat false news and misinformation” and declared by PolitiFact as “half true” on October 13th, yet it remains online without any flags regarding accuracy (see image below taken Oct 16). 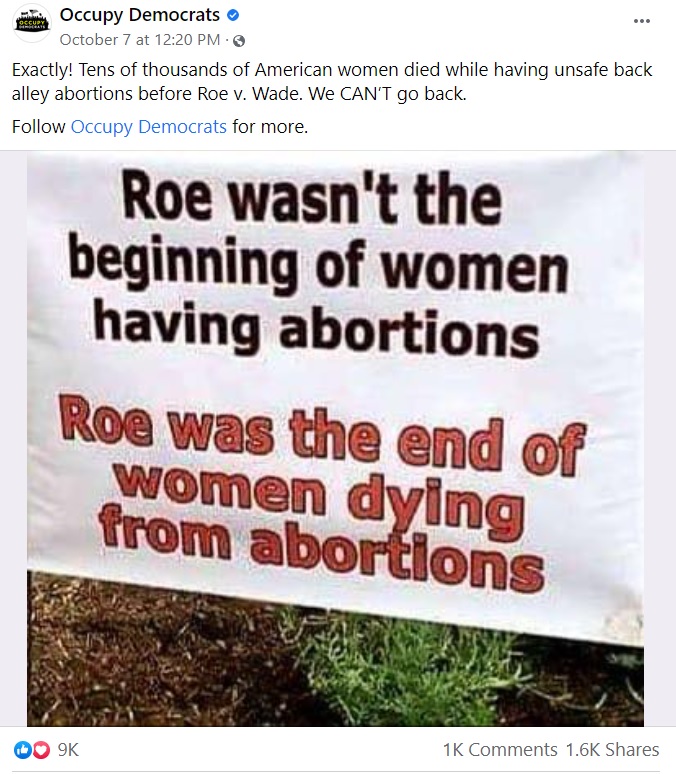 In 2019, the Washington Post gave former Planned Parenthood president Leana Wen four Pinocchios after fact checking a similar claim she made, alleging tens of thousands of abortion deaths prior to Roe. Live Action News has also called out these kind of false stats (read here, here and later here).

Claim: “Roe was the end of women dying from abortions”

Politifact chose to fact check only the claim made on the meme, which read, “Roe was the end of women dying from abortions.”  Despite being 100% false, PolitiFact’s fact checker Madison Czopek rated that claim “half true” because, according to Czopek, Roe “reduced deaths from abortions.”

The only problem is that the meme never claimed Roe “reduced” abortion-related deaths — it claimed it put an “end” to them. In addition, the fact checking group failed to cite exactly how legalization reduced abortion deaths. They did correctly point to the fact that “discovery and popularization of antibiotics helped improve the safety of abortions,” which Live Action News also previously documented. 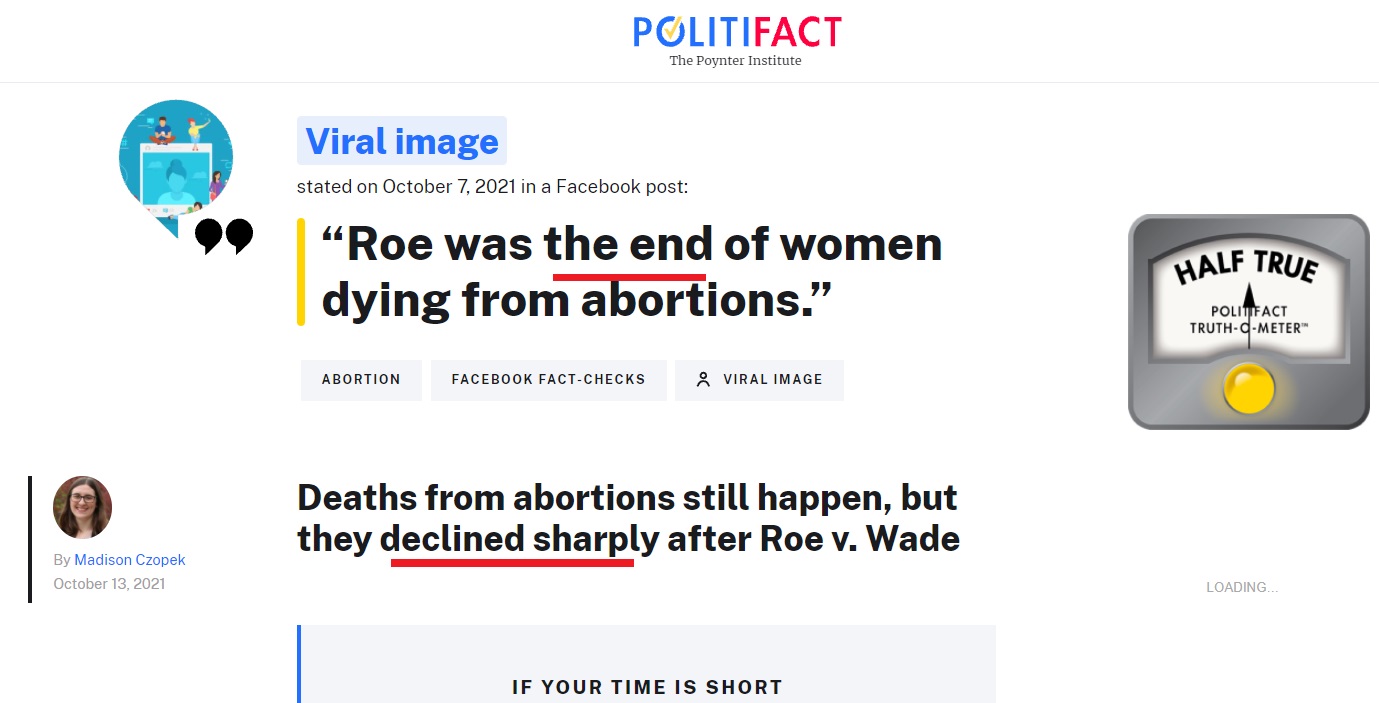 Yet, PolitiFact claims, “The number of deaths related to illegal abortions decreased to 19 in 1973 and dropped further, to six, by 1974, CDC data shows. From 1979 to 2017, the number of women who died in a year was never higher than two.”

However, as you can see in the CDC’s table below there have been multiple years where legal abortion deaths totaled more than two. 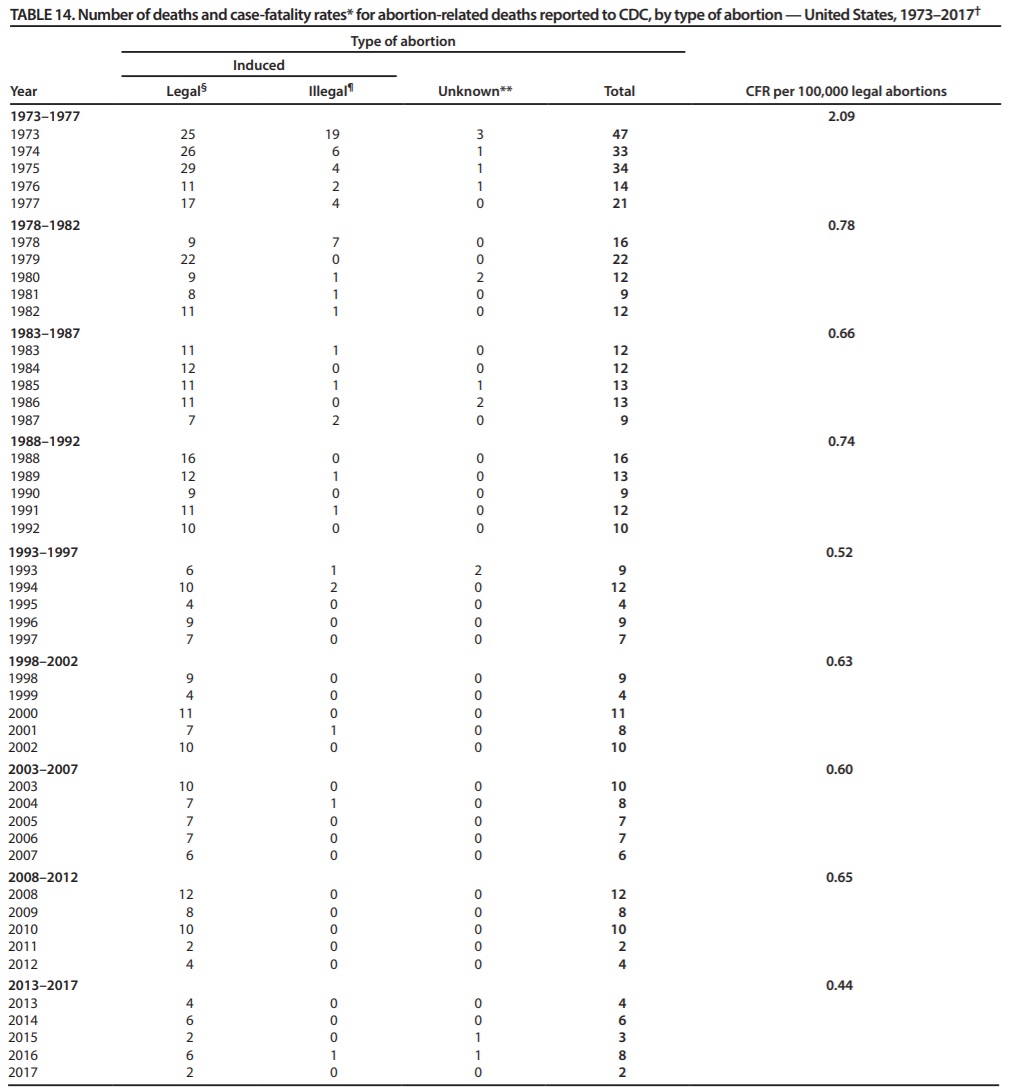 But merely citing statistics paints a foggy picture of the true impact of legal abortion on women’s health. Potential complications, including death, are noted on legal consent forms the abortion industry requires women to sign prior to their procedure. And while the lie that legalizing abortion made it “safe” continues to circulate, it is endangering actual women like Keisha Atkins, Lakisha Wilson, Jennifer Morbelli, Christin Gilbert, Jamie Lee Morales — all of whom are now dead after believing the lie about safe and legal abortion.

Live Action News, Operation Rescue, Life Dynamics, and multiple other pro-life organizations have meticulously documented that legalizing abortion did not make it “safe,” and have proven that since Roe, women still die from legal abortion.

In 2003, Planned Parenthood’s implementation of the unapproved regimen and off-label use of the abortion pill led to the death of 18-year-old Holly Patterson from septic shock.

“We approached Planned Parenthood to try to get Cree’s medical documents from them, but they weren’t willing to give them to us,” Cree’s grieving brother Tyler Sheppard said in a video interview with Live Action. “Justice has not been given to my sister. I lost two people that day — not just a sister, but a niece or a nephew, as well.”

In its review, PolitiFact cited a “study by the Guttmacher Institute,” which it defined as “a global research group that supports women’s access to abortions.” This description left out the fact that Guttmacher is no mere pro-abortion research group.

PolitiFact also reached out to Diana Greene Foster, author of the highly questionable Turnaway Study, who promoted the abortion pill and told the fact-checking group, “The same safe pills that one can get in an abortion clinic, one can order online.” Yet, results of a TelAbortion study, which implemented more stringent safety requirements than required for typical use, recently revealed that six percent of “known outcomes” from the abortion pill in just that study were severe enough to result in emergency room or urgent care visits, with additional women experiencing serious adverse events.

Foster was described by PolitiFact as a “UCSF professor specializing in reproductive health” yet she is a director at Bixby Center for Global Reproductive Health, a UCSF program which trains abortionists. Foster is also on staff as research director at Advancing News Standards in Reproductive Health (ANSIRH), and sat on the board of the Later Abortion Initiative, a group with the mission of “increas[ing] the number of sites where later abortion is available” and “expand[ing] the number of physicians who can perform later abortion, especially at 20 weeks’ gestation and beyond.” In addition, the organization’s mission also includes “build[ing] support for later abortion and fight[ing] restrictions on later abortion at the state level.” Foster has been applauded by the abortion advocacy group NARAL.

Another alleged expert cited by PolitiFact was Carole Joffe, described as “a professor at the University of California, San Francisco, who specializes in reproductive health and has extensively researched access to abortion services.” She acknowledged that “[n]o one was keeping careful track” of abortion numbers prior to a few years leading up to Roe. Joffe, likewise, is hardly an unbiased source. She sat on the board of the National Abortion Federation for years and served on a program for the Abortion Care Network, which is a membership organization of independent abortion providers. According to her CV, Joffe also sat on the Advisory Board of the California NOW Foundation, was on the Advisory Board for Planned Parenthood of New York’s Clinician Training Initiatives, and was a long standing member of the Association of Reproductive Health Professionals (ARHP). ARHP was formerly called the Association of Planned Parenthood Physicians (AAPP), was originally based out of Planned Parenthood offices, and was also funded by the organization.