Planned Parenthood, which receives over half a billion taxpayer dollars every year, while committing at least 40 percent of all abortions in the U.S. and netting millions in excess revenue as a result, is pointing to the COVID-19 pandemic as reason for recent layoffs at several of its facilities across the nation. However, there may be more to the story.

Nationally, Planned Parenthood has been mired in controversies and was already bleeding donors in 2018, losing 400,000 over the course of the year, according to its own reports.

Last month, Live Action News reported layoffs at a Planned Parenthood affiliate in New York, allegedly due to the COVID-19 pandemic. At that time, a PP spokesperson told the Times Union that 135 staff members were laid off, 111 were furloughed, and 35 received reduced hours. Since then, more recent media reports appear to indicate that the numbers have ticked upwards slightly. Below are snippets from some media outlets by date. 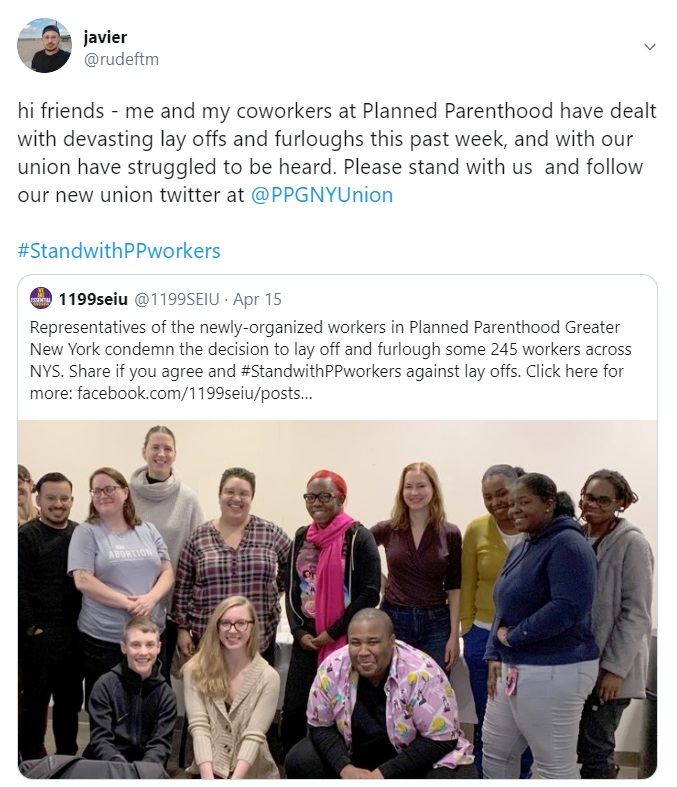 An April 15, 2020, SEIU Facebook post condemned the “the decision to lay off and furlough some 245 workers across New York State.”

As previously reported, a former staffer suggested to the Times Union that “the crisis gave leadership cover to implement layoffs and closures it had already been planning” — a charge PP’s leadership denied. Despite the consistent claim that health care access is important for their patients, staffers said the abortion corporation had made “no effort to keep offices open, even one or two days per week.”

As of the publishing of this article, WARN notices — which ensure advance notice in cases of mass layoffs — indicate layoffs at several NY PP’s: 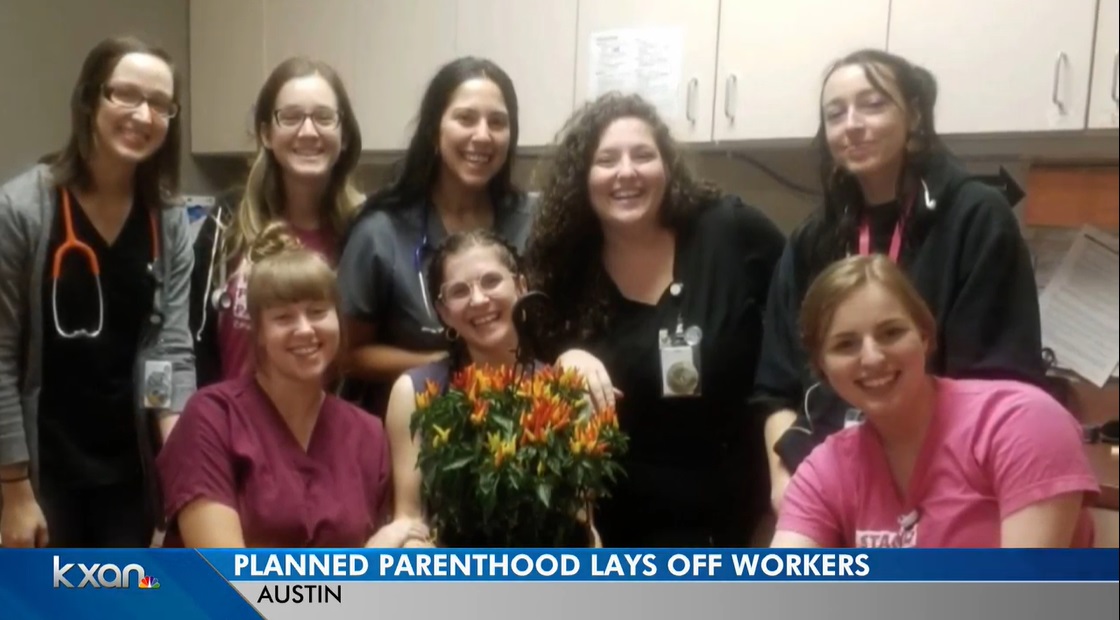 Live Action News recently reported how 20 Texas Planned Parenthood staffers in Austin were fired in April. According to KXAN, “Planned Parenthood management confirmed it made staff cuts, but it says it’s a business decision it had to make because of COVID-19.”

However, KXAN went on to report how the former staffers claimed “they believe it’s direct retaliation for both voicing complaints to the CEO and their ongoing efforts to unionize within the past year.”

“Our suspicion is that it was motivated by our organizing activity,” said Ella Nonni, who has worked for Planned Parenthood for two years.

Despite false claims that abortion is “essential” and uses little PPE (claims made after Live Action News documented Planned Parenthood’s requests for donations of the protective gear, taking valuable resources away from COVID-19 health care workers), abortion staff in Texas claimed they didn’t have enough PPE.

“Nonni said there is not enough PPE at the clinics, workers are being forced to do non-essential work for patients in-person and they’re not being offered paid sick leave if they come down with COVID-19 symptoms,” KXAN reported.

In addition to Austin,  KXAN reported PP staff layoffs around the state, writing that “Sarah Wheat, a spokesperson for Planned Parenthood of Greater Texas… said other employees were laid off in Dallas, Fort Worth, Plano and Denton as well.”

In response, former Planned Parenthood director Abby Johnson tweeted, “To the Planned Parenthood workers who were fired because they dared to question the dangerous protocols of the abortion giant… we’ve got your back at  @ATTWNministry. Give us a call 24/7.” 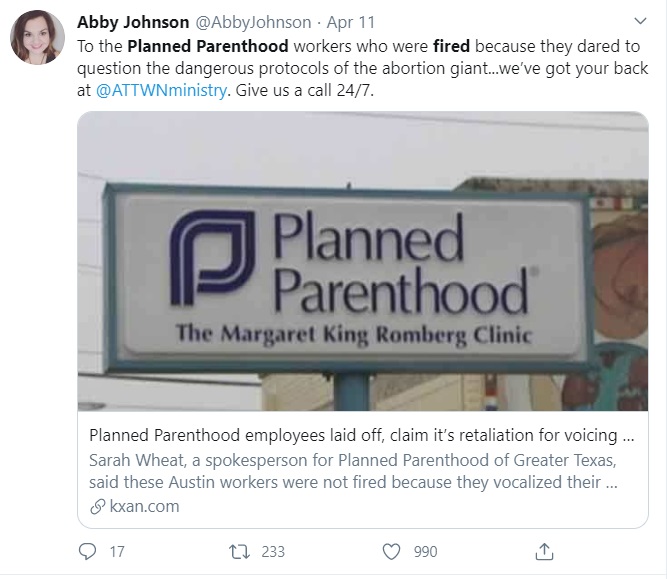 This is not the first time workers claimed retaliation against the abortion corporation for attempting to unionize. In 2019, Live Action News reported several instances of this, including one in which an alleged staffer wrote about Planned Parenthood’s fight against unionizing on Instagram: “Friends – today is my last day working for Planned Parenthood of the Rocky Mountains…. PPRM’s management have only pushed back in order to keep us from accessing our basic employee rights…. I’ve given the last two years of my life to this cause that I love so much and to see my colleagues bullied like this by the agency they have worked so hard for breaks my f**king heart….”

Also in 2019, Live Action News documented additional PP staffers jumping ship. Statements by whistleblowers indicate that employees have been dissatisfied for a long time. This has caused some to unionize, others to expose the corporation’s abuses and low wages, others to detail the failure of affiliates to offer paid medial leave, and others to reveal how the corporation’s leaders prioritize profits over care.

“An organization that’s motto is ‘Care No Matter what’ and has a progressive image really wasn’t taking care of its workers,” Nonni stated.

The layoffs follow years of controversies, bad PR, and a serious image problem for the abortion business — ranging from the exposure of Planned Parenthood’s role in the trafficking of aborted baby body parts, to whistleblower lawsuits, to staffers exposing how the corporation discriminates against pregnant employees, and numerous scandals, abuses, and fraud, including covering up for child sexual predators.

Since 2000, Planned Parenthood has committed over 5.6 million abortions. An analysis by Live Action News found that in 2017, the corporation’s estimated abortion revenue reached nearly $200 million ($190.3), totaling 52% of its non-government health services revenue. In 2017, PP took in nearly $245 million over expenses, and that excess revenue in 2018 totaled $110 million. Since 2000, while demanding more from U.S. taxpayers, the corporation has raked in over $1.5 billion in excess revenue.