In June 2019, PPGNY was formed by merging five Planned Parenthood affiliates: New York City, Nassau County, Mid-Hudson Valley, Mohawk Hudson, and Southern Finger Lakes. But according to the Times Union, less than a year after the merger, the affiliate was “projecting a $6.2 million deficit for the first six months of the year and a $10 million deficit for the full year.” Earlier this week, Planned Parenthood of Greater New York President and CEO Laura McQuade cited the COVID-19 pandemic as “an incredible strain on our resources” in a letter to staff. She also said “financial modeling showed losses for the affiliate ranging from $20 million to $32 million for the remainder of the year, depending on how long the pandemic lasts and its impact on fundraising.”

“Sadly, these losses will be catastrophic for PPGNY if we do not take steps now to reduce the financial impact on our organization,” the Times Union quotes McQuade as saying.

But former staff told the Times Union that “the crisis gave leadership cover to implement layoffs and closures it had already been planning” — a charge PP’s leadership denied. Despite the consistent claim that health care access is important for their patients, staffers said the abortion corporation had made “no effort to keep offices open, even one or two days per week.”

The move follows an announcement that PPGNY had begun to roll out Telehealth services. “PPGNY is proud to launch virtual health care services to connect patients to our trusted providers without having to visit a health center,” PPGNY wrote in a press release. But perhaps the real reason for the move to “virtual” services is the closure (at least “temporarily”) of a dozen facilities. 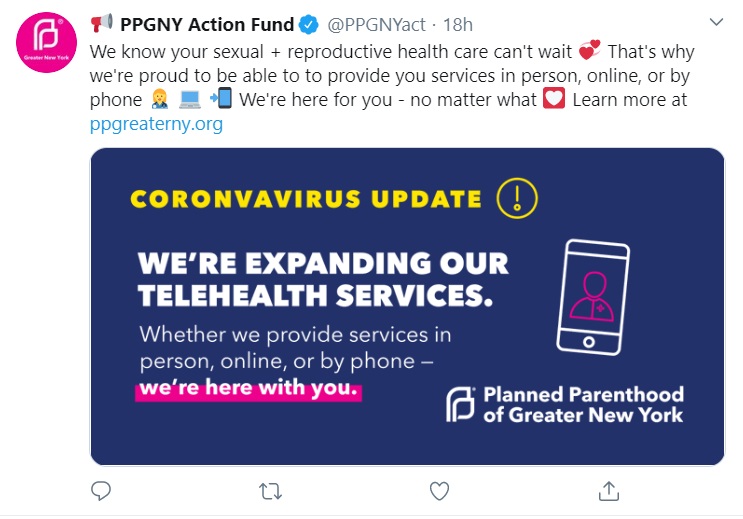 According to the Times Union:

None of those locations are in the Capital Region, where the affiliate operates seven centers. Centers that have closed are located in the Bronx, Glen Cove, Goshen, Hornell, Kingston, Massapequa, Monticello, Oneida, Rome, Staten Island and Watkins Glen. A mobile health center that operates out of Nassau County has also closed…. The temporary closure of health centers will leave some communities… with no nearby options for sexually transmitted infection (STI) testing or abortion services, according to staff at those centers. 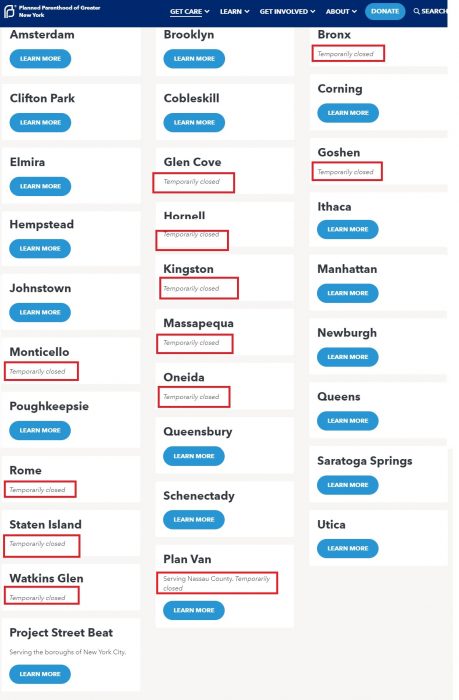 PPGNY spokeswoman Jacquelyn Marrero blamed the deficits on a drop in “non-abortion visits” and the cancellation of major fundraising events due to COVID-19. But she also claimed that while abortion visits dropped slightly, they began to recover in mid-March and the affiliate saw an “uptick” in early April after the affiliate began to receive “referrals” from other providers focused on COVID-19. In addition, Marrero hinted at a loss in revenue due to a “slow down” in “philanthropic giving.” Live Action News has documented how abortion is a huge source of revenue for Planned Parenthood affiliates nationally. In addition, during Planned Parenthood’s fiscal year ending in June 2019, support for the abortion corporation showed a national decline of nearly 400,000 individual donors.

Marrero told the Times Union that 135 staff members were laid off, 111 were furloughed, and 35 received reduced hours. “Reductions were not specific to any one location and impacted all departments,” she said, noting that the goal is to “bring back furloughed staff once the organization stabilizes…. The facilities will reopen, Marrero said, as the pandemic and risk of infection recedes.”

Upper Hudson Planned Parenthood CEO Chelly Hegan also expressed a drop in revenue, and is reportedly attempting to “raise $100,000 by the end of April to help offset those losses.”

This isn’t the first time in which Planned Parenthood staffers went to the media to expose the corporation’s cracking foundation. Live Action News has reported how the employees exposed the abortion giant’s long-held secrets, inner workings, and toxic attitudes, including:

The news follows years of controversies and a serious image problem for the abortion business, ranging from the exposure of Planned Parenthood’s role in the trafficking of aborted baby body parts, to whistleblower lawsuits, to numerous scandals, abuses, and fraud — including failing to protect patient privacy, charges of discrimination, and the repeated aiding of child sexual predators.