Planned Parenthood’s estimated abortion revenue totaled more than half (52%) of the organization’s non-government health services revenue, reaching nearly $200 million ($190.3) for the second year in a row, according to an analysis conducted by Live Action News.

The stunning numbers confirm what Planned Parenthood’s new president Dr. Leana Wen claimed when she identified abortion as Planned Parenthood’s “core mission.” As Live Action News previously documented, in 2017, although Planned Parenthood claimed abortion made up just 3.4 percent of its services, the abortion vendor was able to increase abortions nearly four percent (3.54%), from 321,384 in 2016 to 332,757 in 2017, the highest number committed by the corporation since 2011.

To calculate the latest data, Live Action News used the same methodology utilized in 2016: examining revenue and median abortion costs and comparing them against reported abortion totals in Planned Parenthood’s 2017-2018 annual report, in which the organization reported committing 332,757 abortions.

Planned Parenthood’s website notes the cost of a surgical abortion:

An abortion in the first trimester can cost up to $1,500, but it’s often less. The price of an abortion depends on where you get it (hospitals are often more expensive), and whether or not you have health insurance that will cover some or all of the cost. The cost also varies based on how long you’ve been pregnant — a second-trimester abortion usually costs more.

It also says this about the cost of a medication abortion:

The abortion pill can cost up to around $1000, but is often less. The cost of a medication abortion varies and depends on where you get it and whether or not you have health insurance that will cover some or all of the cost.

For our measurement, we will use $508 for early surgical abortions and $600 for medication abortions.

Here’s what a medication abortion entails, according to former abortionist, Dr. Anthony Levatino:

For our measurement, we will average Planned Parenthood’s Ohio abortion prices and use the $1,195 price for abortions past 21 weeks, although they are likely higher.

READ: Half of Planned Parenthood’s non-government revenue comes from abortion

Abortions in the second trimester are often called dismemberment abortions as described in the video below:

2. Number of abortions by trimester

To determine Planned Parenthood’s estimated abortion revenue, Live Action News multiplied the number of abortions by trimester with the average cost of abortions, as follows:

We then broke down the percentage of abortion revenue using figures from a revenue statement located in Planned Parenthood’s 2017-2018 annual report. 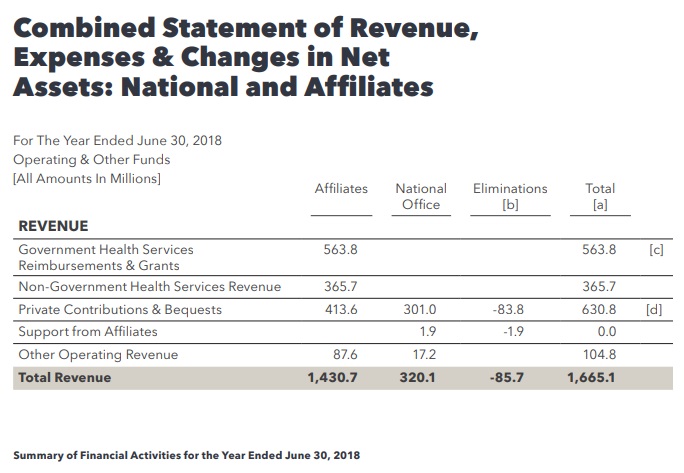 Note that there are two sources of revenue for “health services,” which include:

Percentage of all Planned Parenthood revenue: 11.4%

According to our calculations, over the past few years, estimated abortion revenue has steadily risen at the abortion corporation:

Between 2016 and 2017 government funding to Planned Parenthood (over half a billion dollars annually) rose nearly four percent (3.69%) even though the abortion vendor has been embroiled in numerous scandals, abuses and fraud, including covering up for child sexual predators as well as disgruntled employees, claiming a toxic work environment and pregnancy discrimination.

With increasing abortions generating millions in revenue for Planned Parenthood (while national abortion totals decrease) is it any wonder why actual health services like cancer screenings and well women exams at Planned Parenthood have decreased? Planned Parenthood has vowed in 2019 to focus even more on their abortion “cash cow,” and if radical amendments such as the Equality Act or Medicare for All are passed, we can expect those numbers to skyrocket even more.