Guttmacher’s latest abortion report indicates that over 20 million abortions have taken place within the United States since 2000. According to the data, between 2000 and 2017, a total of 20,057,120 abortions have been reported to the Guttmacher Institute — and interestingly, over one quarter (26%) of those procedures (5,281,838) were committed by taxpayer-funded Planned Parenthood. But even as national abortion numbers drop, Planned Parenthood’s market share of abortions is climbing. In recent years, Planned Parenthood has been gaining a growing share of abortions, and currently commits nearly 40% of the nation’s abortions. 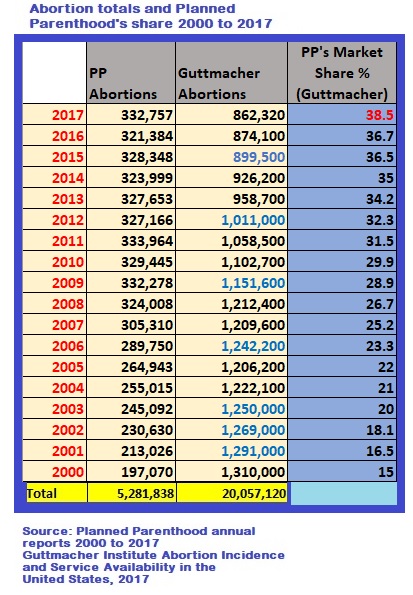 In 2014, Guttmacher reported a total of 926,190 abortions in the U.S. — and although Guttmacher did not publish abortion totals for 2016, its 2017 Abortion Incidence and Service Availability report noted 864,080 abortions were committed in 2016 and 862,320 abortions in 2017, as previously reported by Live Action News. To gather information, Guttmacher allegedly sent surveys or made calls to “2,277 facilities in our universe of potential abortion-providing facilities as well as state health departments….”

Planned Parenthood’s former “special affiliate” reports receiving “questionnaires from 954 entities (42%) and acquired data during telephone and e-mail follow-up from an additional 386 entities (17%).” It also “used health department data to determine the abortion caseloads of 423 facilities (19%).” Then, for another 446 facilities (20%), the Guttmacher report states that it “estimated abortion totals using a variety of techniques and information sources.”

According to the report, the 12 states Guttmacher viewed as “supportive of abortion rights in 2017… accounted for 43% of all U.S. abortions in that year.” Those states were “California, Connecticut, Hawaii, Maine, Maryland, Montana, New Jersey, New Mexico, New York, Oregon, Vermont and Washington.”

The number of abortions from those states plus several additional states with high reported abortion numbers for 2017 are listed below:

“Abortion rates declined in nearly all states between 2011 and 2017, regardless of whether the state enacted new abortion restrictions,” Guttmacher also reported.

The Guttmacher Institute reported that between 2014 and 2017, there was a five percent decline in “health care facilities” known to have provided abortions, but a two percent increase in the number of “abortion-providing clinics.” 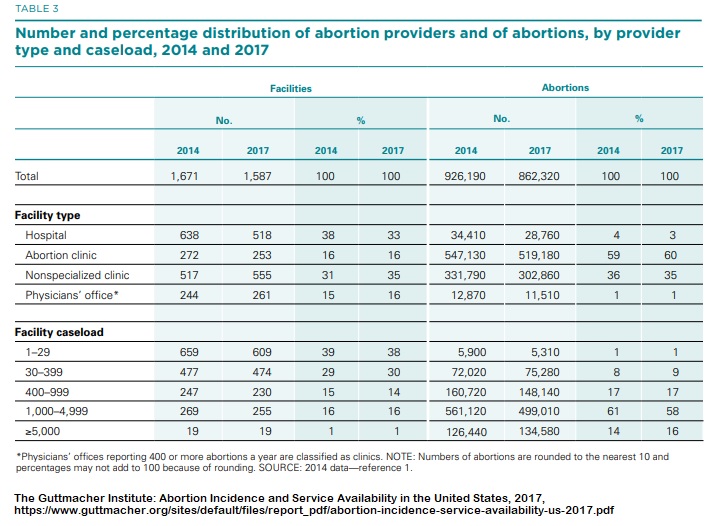 Guttmacher officially reported 808 “abortion clinics” in 2017 (which consist of two of the four categories listed above: Specialized and Nonspecialized Abortion Facilities), and cites a two percent increase from 2014. Despite this increase Guttmacher noted that “between 2011 and 2014, the number of clinics providing abortions had declined by 6%.” According to the report, of the 789 abortion clinic providers in 2014, “127 had not been providing this care in 2014,” while, they claim, “103 had stopped doing so or had closed by 2017.”

States with just one “abortion-providing clinic” in 2017, as defined by Guttmacher (two of the four categories previously mentioned above), included: 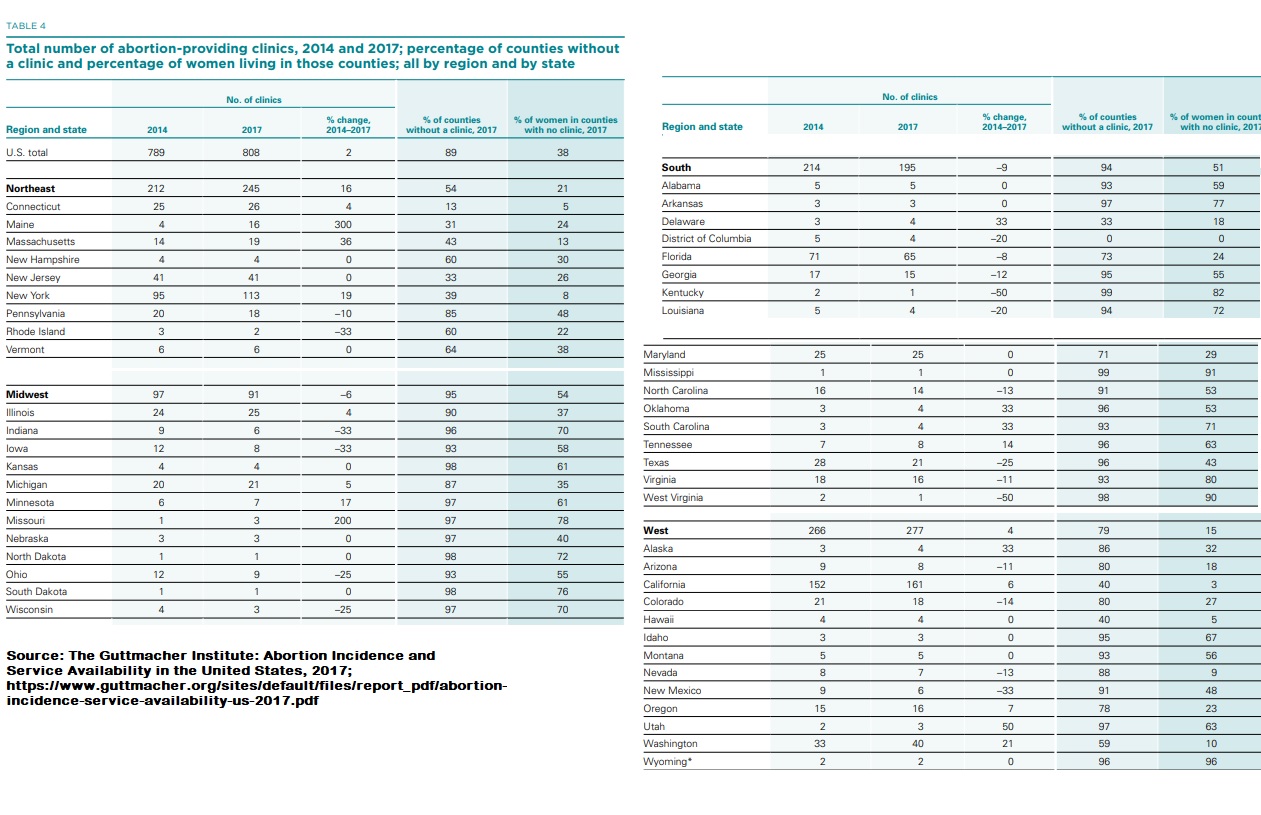 According to Charlotte Lozier Institute Associate Scholar Dr. Michael J. New, “Between 2011 and 2017, the U.S. abortion rate fell by approximately 20 percent. The long-term decline is even more impressive. Since peaking in 1980, the U.S. abortion rate has fallen by over 53 percent and is now lower than what it was in 1973 — the year of the Roe v. Wade decision.”

In their report, Guttmacher acknowledges that increased health and safety standards for abortion facilities are correlated with abortion rate declines in some states. However, they take considerable pains to argue that other pro-life policies have had little do to with the overall decline. In particular, they argue that pro-life laws, shifts in public opinion, and reductions in sexual activity have only had a marginal impact on the U.S. abortion rate.

Unsurprisingly, many mainstream media outlets have uncritically parroted Guttmacher’s spin. That said the main problem with Guttmacher’s analysis is they only consider data between 2011 and 2017 — a relatively short period of time. When one considers the fact that the U.S. abortion rate is less than half of what it was in 1980 — it is evident that the efforts of pro-lifers are having a significant impact.

A regular, prayerful presence outside abortion facilities may also be adding to the reductions. In 2018, Live Action News documented how “independent [abortion] clinics are closing at an unprecedented rate.” According to a 2019 summary published by Abortion Care Network, “The number of independent clinics in the U.S. has been reduced by 28% since 2012.”  And, according to Guttmacher, in 2017, 89% of U.S. counties did not have a facility that provided abortions.