Despite the fact that a five year study of some of the sex education programs Planned Parenthood promotes have proven them ineffective — even counterproductive — the abortion corporation is suing the Trump Administration because the United States Department of Health and Human Services (HHS) pulled grant money from these failed programs. The Washington Post reports:

Planned Parenthood has joined forces with eight other local government, health care, and advocacy organizations to take the Trump administration to court over the defunding of a national teen pregnancy program…. The groups filed four separate lawsuits in U.S. District Court in the Eastern District of Washington, in Maryland and the District of Columbia, arguing that approximately $220 million in grants was wrongfully terminated. The Obama-era Teen Pregnancy Prevention Program (TPP) was created by Congress to conduct rigorous scientific research into what approaches work to lower teen pregnancy rates and try to provide the best ones to at-risk youths.

An NPR story, which clearly writes in support of the sex ed programs, notes that “the Planned Parenthood chapter, along with eight other groups, is suing HHS, saying it acted unlawfully when it canceled their five-year grants midstream and with no explanation.” However, the NPR story actually goes on to explain why the funding was pulled:

An HHS spokeswoman said the agency ended the program because it’s not effective.

“Teen birth rates have been declining since 1992 and less than 1 percent of the teen population has been served by TPP,” the spokeswoman, who declined to be named, said in an email. “Of the 37 projects funded and evaluated for a 2016 report, 73 percent had no impact or had a negative impact on teen behavior.”

The lawsuit is a “Complaint For Declaratory and Injunctive Relief” and asserts, among other complaints, that HHS’s decision was “arbitrary and capricious,” not giving a reason for the termination. The complaint also argues that “[p]laintiffs are replicating proven evidence-based pregnancy prevention programs and engaged in empirical research of new and innovative pregnancy prevention programs.”

But whether or not the programs are proven to be evidence-based certainly doesn’t mean they are effective, as Live Action News reported in late 2016, after a five-year study from the HHS, evaluating its own funded programs. HHS funds these programs and sought to report on the success rates of their implementation, and despite them being implemented by-the-book, the results were lackluster, showing that most programs produced no statistically significant change in teen sexual behavior. Further, some of the results showed an increase in the very behaviors the programs sought to prevent.

As Live Action News noted when the report was released:

What is supposed to be “comprehensive sex ed” curricula that would reduce risky sexual behavior and reduce teen pregnancy has not delivered, as the summary report from HHS reveals. Among the Planned Parenthood recipients mentioned in the HHS report are Planned Parenthood of Greater Orlando, which received $477,790, and Planned Parenthood of the Great Northwest, which received a whopping $4 million….This grant used the Teen Outreach Program (TOP) “evidence-based intervention.” However, the evaluation of the program revealed, among other things, that “TOP females reported becoming pregnant at a higher rate than females receiving the alternative program.”

But that was counter to the original goal presented in the program description, which was to reduce teen pregnancy rates, decrease onset of sexual activity, increase contraception use among sexually active youth, among others.

The results (emphasis added) were underwhelming:

After offering the program over nine months to middle and high school students during or after school, TOP youth were as likely as youth offered a four-hour alternative program, to report causing a pregnancy or becoming pregnant, having sexual intercourse, or having recent sexual intercourse without an effective method of birth control both immediately following the conclusion of the program, as well as in an assessment occurring 12 months later. However, TOP® affected males and females in the study differently. Immediately after the program, TOP males reported lower rates of causing pregnancies than males receiving the alternative program, whereas TOP females reported becoming pregnant at a higher rate than females receiving the alternative program.

This was only one of many programs that Planned Parenthood and these other entities tout as “evidence-based” for reducing teen pregnancy, sexually transmitted diseases, and risky behavior. While some programs did show as effective in meeting some goals, the results were mixed and underwhelming. The Washington Post reports that while HHS’s reasoning has not been clear to the plaintiffs, one thing is clear to HHS — these programs also make teenage sexual activity a normal, and even expected behavior:

Official statements from HHS to the media about the program have been vague — mentioning “weak evidence of positive impacts,” that the program was “a poor use of … taxpayer dollars” and the department wanted to make sure the program provides teens the information and skills they need to “avoid the many risks associated with teen sex.” However, a number of administration officials have raised politically conservative objections. Valerie Huber, a prominent abstinence advocate who is acting deputy assistant secretary for the Office of Population Affairs, has argued that the program’s approach “normalizes teen sex.”

That was part of the concern to Planned Parenthood and friends, who are upset that the study, designed to be a five-year program, was terminated two years early; they say it’s an issue of religion and ideology, rather than science, as the Washington Post reports:

Attorneys from Planned Parenthood, Democracy Forward and Public Citizen accused officials of attempting to illegally dismantle the program based on ideological beliefs rather than science.

Carrie Y. Flaxman, deputy director for public policy litigation for Planned Parenthood Federation of America, said in an interview that the programs have been widely praised as “models for kind of the best practices for teen pregnancy prevention across the country” and should be expanded, not cut back.

However, valid concerns might exist for many, religious views or not. The NPR story reports on the Healthy Teen Network in Baltimore, which is using federal money to develop an app “to help [15- to 17-year-old] teens make choices about sex and dating and to give them information about reproduction, birth control, safety and health care.”

The original app – called CrushApp.org – “tells you things like how does a pregnancy occur,” Paluzzi says. “A lot of people don’t actually know where pregnancy occurs.”

A section called “Love & Sex” offers menu options such as “Is He A Keeper?” and “Put One On” about using condoms. There are cartoons and animated videos to help teens navigate relationships, dating and sex. 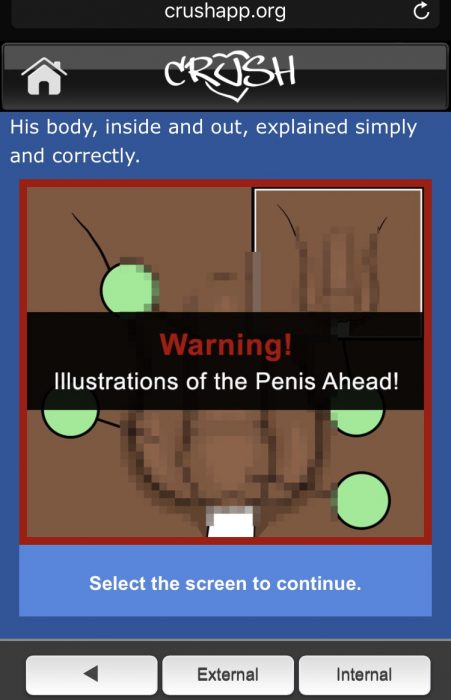 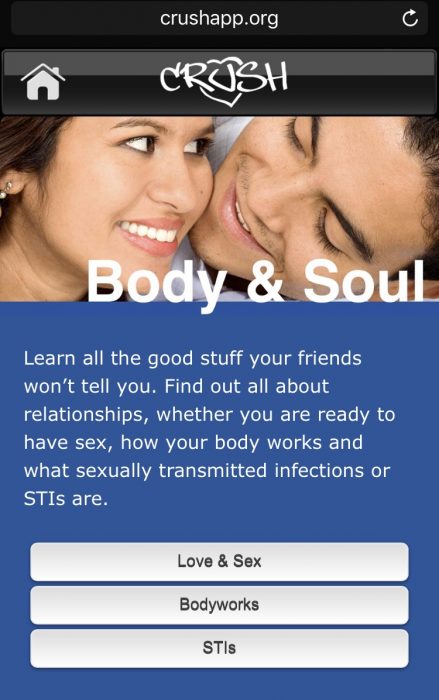 The app website also has a link to find health care, and it includes Planned Parenthood wherever it’s in the region.

But that’s the likely bigger issue here because, as Live Action reported back in 2016, the sex ed programs touted by Planned Parenthood have certainly been successful in one area: “It’s allowed the abortion chain’s staff to have an entrance into public schools. Considering Live Action’s investigation into Planned Parenthood’s sexual advice for children, this is disturbing.”

In the lawsuits, the grantees charge that HHS is disseminating a “misleading and skewed interpretation” of the program and that the “newfound criticism” is “inconsistent with the agency’s own data,” noting that evaluations had found that about a third of the experimental interventions led to positive changes in the youth’s behavior related to their reproductive health.

The issue, of course, is that even if, as the plaintiffs assert, one third of the programs are resulting in positive changes, what does that say about the other two-thirds? When a majority of anything is failing repeatedly, it’s not unusual to redirect or change course entirely.

The summary reports on the effectiveness of these programs is troubling at best.

Pages 6-7 of the complaint address the South Carolina Campaign to Prevent Teen Pregnancy and the need to continue funding; results show it’s not been effective.

Instead, what is happening is that organizations like the Healthy Teen Network, by its own admission, use their federal money to help teens learn more about how to have sex, to refer teens to Planned Parenthood, and to help them “learn the good stuff [their] friends won’t tell,” and that’s likely not where the average American wants to see taxpayer money going when it comes to preventing pregnancy.

The text of the entire complaint may be accessed here.