Planned Parenthood released its 2016-2017 annual report over the New Year’s Eve holiday weekend. In a nutshell, contraception services, cervical cancer screenings, and other legitimate health services offered by the abortion corporation have all decreased again, along with a very slight decrease in abortions (two percent drop). It is clear from Planned Parenthood’s own annual report that women don’t really need the organization, and are finding legitimate health care elsewhere.

From 2006 to 2016, abortions at Planned Parenthood increased nearly 11 percent, averaging more than 320,000 abortions per year. Despite the fact that figures indicate abortions are on a steady decline nationally, in 2016, the organization reported ending the lives of 321,384 preborn children (down from more than 328,000 the previous year), maintaining the organization’s nearly 35 percent nationwide market share of abortions.

Planned Parenthood CEO Cecile Richards (who is a political organizer with no background in health care) once proclaimed, “We aim to be the largest kick-butt political organization.” And indeed, Planned Parenthood is highly political, using its pro-abortion friends in Congress and the media to increase its bottom line and pay its staff (and especially its CEO) extremely high salaries. As previously documented, a former top executive for Planned Parenthood once admitted that the abortion corporation’s “success” was linked to power and money, and he showed that taxpayer dollars are what enable the abortion corporation to recruit, hire and pay its top staffers six-digit salaries.

2016 was no exception to the previous years.

Despite promises from many in Congress to defund the abortion giant, Planned Parenthood’s 2016-2017 annual report reveals that taxpayer funding barely dropped at all — less than 2 percent — from $554.6 million in 2015 to $543.7 million in 2016. This mere sliver of a decrease cannot even begin to counter the astronomical 61 percent increase in taxpayer funding to the organization between 2006 and 2016, from $336.7 million to $543.7 million. 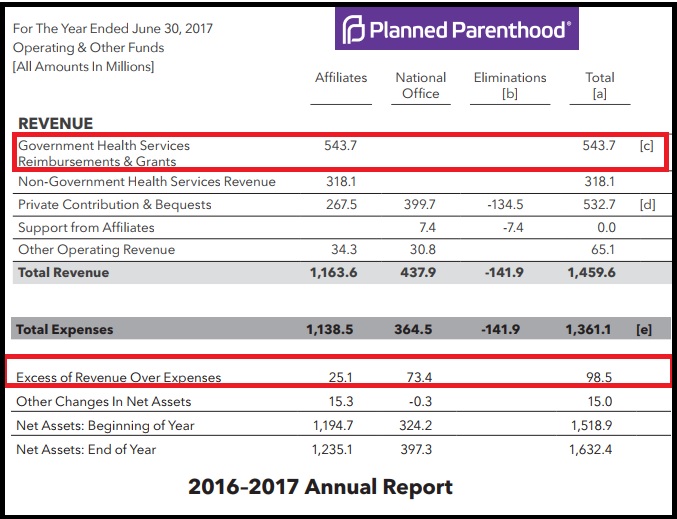 While taxpayers sent half a billion dollars in state and federal dollars to Planned Parenthood, the abortion corporation managed to increase its excess revenue from $77.5 million in 2015 to a whopping $98.5 million in 2016. That’s right: this nonprofit organization pocketed a profit of $98.5 million last year alone.

In 2016, Planned Parenthood’s decreasing services continued as demonstrated below…

In 2016, Planned Parenthood claims to have served 2.4 million patients, dropping nearly 23 percent from the 3.1 million they boasted just ten years ago in 2006. And, while Planned Parenthood’s patients are steadily declining, federally funded health centers, as identified by the federal Health Resources and Services Administration, served nearly 26 million patients in 2016 alone.

Live Action News previously documented that in some cases EC can act to prevent the implantation of a newly-fertilized human being into the uterine wall. Since life scientifically begins at fertilization, intentionally ending the life of a new, unique individual after fertilization has occurred is an abortion, and any type of birth control that has the potential to end the life of a new human being can be considered an abortifacient. There is no way to know for certain if or when this occurs when a woman takes EC, and therefore, these cases cannot be calculated into the total abortion numbers.

Planned Parenthood claims to have done 3,889 adoption referrals. In order to be eligible to receive federal Title X funds, the abortion corporation must offer information on all pregnancy options, including adoption. According to former Planned Parenthood manager Crystal Eldridge, the adoption option is presented in the form of mere lip service (“You know your choices, right? You can keep it, abort it, or put it up for adoption,”), and former manager Sue Thayer says the organization merely puts a small packet in front of women on their pregnancy options which the women did not have to accept, with no discussion on the actual options themselves:

Last year, Live Action exposed the way Planned Parenthood handled adoption referrals, which might account for why this number rose from the previous year (2,889 in 2015 to 3,889 in 2016). Live Action investigators contacted various Planned Parenthood facilities, some of which receive tax dollars from Title X. According to requirements under Title X, projects that are funded must offer pregnant women several options regarding their pregnancies, including prenatal care and adoption.

What you will hear in the video below is how Planned Parenthood fails to offer Live Action’s investigators any of this — no adoption counseling, no adoption referrals, no list of adoption agencies, and no chance to speak with any so-called “specially trained staff” about the adoption option, despite online statements to the contrary:

In 2015, Planned Parenthood also introduced the subcategory “Other Contraception Services” to the Contraception category.  This “Other” subcategory, which the abortion corporation does not define, increased nearly 13 percent from 2015 to 2016. What is interesting is that adding these additional categories keeps the abortion profiteer’s abortion services conveniently at 3 percent of the organization’s overall services. Live Action has previously shown, however, that this three percent figure is complete nonsense, and is arrived at through a great deal of manipulation. The Washington Post even called this statistic “misleading,” awarding it three Pinocchios, and Slate called it “the most meaningless abortion statistic ever.”

Planned Parenthood once operated 900 facilities, yet today, states on its website that it now operates “more than 600 health centers,” a further decline of nearly 8 percent from what they published on their website last year.

While these kinds of decreases are good news, the tragedy is that one in every seven patients at the abortion corporation has an abortion. Money is fungible and can be used to pay for facilities and staff who commit abortion. And while Congress fails to defund Planned Parenthood, taxpayers are forced to continue to monetarily support an abortion business that takes the lives of approximately 881 preborn children per day. The time to defund is now.

Editor’s Note: This report has been corrected. An earlier version incorrectly reported 2014-15 patient numbers instead of 2015-16.