A sexual predator preys on young women. An entire industry, with the help of the media, covers it up.

No, I’m not talking about the allegations against Hollywood mogul Harvey Weinstein.

I’m talking about Planned Parenthood and its friends in the abortion industry, and the media who refuses to report the truth about them.

For years and years, young sexual abuse victims have been taken to Planned Parenthood and other abortion facilities — and time and again, rather than reporting the abuse to authorities, these agents of “abortion: no matter what” committed abortions on those victims and often returned them to the arms of their abusers.

In 2002, Life Dynamics president Mark Crutcher sounded the alarm about the possibility that the abortion industry was covering up child sexual abuse. He released over 800 audio tapes that document Planned Parenthood and abortion facility staffers covering up statutory rape.

In most of the recordings, abortion workers — who claim to be for “women’s rights” and who are required by law to report child abuse — coached the undercover caller (posing as a 13 year-old child impregnated by a 22 year-old adult male, seeking an abortion) on what to say to hide the crime.

“The results of this survey were appalling,” Crutcher told the media. “Even though 91 percent of clinic workers said they were required by law to report statutory rape, virtually every Planned Parenthood and National Abortion Federation facility we contacted was willing to illegally conceal the sexual abuse of the 13-year-old girl.”

Then, in 2008, Live Action released its own child sexual abuse investigation. But this time, instead of audio, Live Action president Lila Rose and another undercover investigator used video, posing as girls as young as 13, with “boyfriends” as old as 31.

That investigation found that eight Planned Parenthood facilities in six different states were willing to cover up sexual abuse, including disregarding mandatory reporting laws of suspected statutory rape. Facilities even provided instructions to the undercover investigators on how to circumvent parental consent laws.

One video showed a Planned Parenthood nurse seemingly willing to hide potential abuse before advising on how to obtain the abortion, and admitting, “I am supposed to report to Child Protective Services,” adding, “Okay, I didn’t hear the age [of the 31-year-old “boyfriend”]. I don’t want to know the age.”

Another Planned Parenthood counselor, who told Rose, “I don’t care how old he is,” ended up resigning, according to a Fox News report. A Planned Parenthood spokesperson downplayed the allegations and treating them as isolated cases, telling the media, “We’ve had a couple of instances we’ve seen where employees didn’t respond the way they should with regards to teens and reporting abuse.” 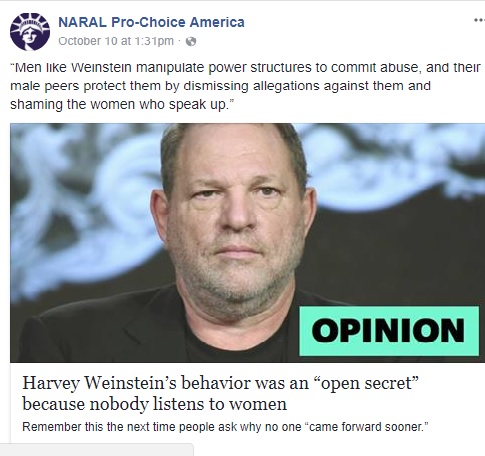 The media largely took Planned Parenthood’s word as gospel, failing to call for oversight and failing to follow-up with their own investigations. Instead, the media criticized the investigator, Live Action, in a false “shaming” of sorts, dismissing the videos as “edited.”

Many abortion organizations, like NARAL, have dismissed all evidence against Planned Parenthood when it comes to covering up child sexual abuse — which is interesting, considering how NARAL has spoken out against Harvey Weinstein (see screenshot, right).

In 2011, Live Action’s first investigation was followed by another, which set out to see how Planned Parenthood would respond to sex traffickers seeking services, including abortions, for their underage sex slaves.

In this investigation, Live Action sent a male and female undercover investigator into Planned Parenthood facilities in New Jersey, Virginia, New York, and D.C., posing as pimps seeking health services, including abortions for underaged girls. Live Action claimed the videos proved Planned Parenthood was in violation of the law, which states that sex trafficking of minors is a crime and anyone who aids or abets a sex trafficking could also be punished with a crime.

One of the most shocking videos was taped at a Planned Parenthood in New Jersey showing facility manager Amy Woodfruff coaching the “pimp” and admitting that Planned Parenthood had a requirement to report these cases to authorities.

NewJersey.com reported the conversation this way:

They [Live Action actors] told the manager they would bring in girls as young as 14 for tests, birth control and abortion referrals and wanted to know what kind of questions to expect from clinic employees.

The [Planned Parenthood] manager was helpful. She coached them to lie about the age of the girls’ sex partners. “If they are a minor, we are obligated if we hear certain information, to kind of report (it),” the manager said. “So as long as they just lie and say, ‘Oh, he’s 15, 16,’ no one should question them.”

At the time the video was published, Live Action announced it was sending full footage to state and Federal authorities, requesting investigations into Planned Parenthood’s sexual abuse and sex trafficking coverup. In response, Planned Parenthood told the media that it had fired the staffer and then claimed to have reported the “pimp” to authorities.  Planned Parenthood also claimed it would retrain staffers about mandatory reporting laws.

Live Action then produced more evidence in the form of a video interview with former Planned Parenthood employee Ramona Trevino, who stated that Planned Parenthood lied when they said they would retrain staffers. Instead, they trained their staffers to spot undercover investigators like Lila Rose:

The media responded to that interview with relative silence.

I’ve personally scanned page after page of grueling testimonies and police reports documenting actual criminal cases in which girls victimized by sexual abuse and rape (here, here, and here) were taken to Planned Parenthood to hide their pregnancies, and therefore, the crimes against them. None of these crimes were reported, because Planned Parenthood and the abortion industry looked the other way and violated mandatory reporting laws. They took the money, victimizing the girls and killing their children:

Some victims of sex trafficking have since stepped forward to testify about how they were forced to abort their babies, and also stated that they received other medical services from providers who knew they were being controlled by pimps. In a 2014 report from the Annals of Health Law, “Health Consequences of Sex Trafficking,” one victim said that the reason she was taken to Planned Parenthood was because “Planned Parenthood didn’t ask any questions.”

Let that sink in for a moment.

Time after time, it seems that the media has sided with Planned Parenthood in a poor excuse for journalism, giving cover to an abortion organization that has been complicit in the trafficking and abuse of women. For their loyalty to Planned Parenthood, the media frequently given awards — like the Planned Parenthood Federation of America (PPFA) Maggie Award, named after founder Margaret Sanger, a known eugenicist who admitted to meeting with the Ku Klux Klan. 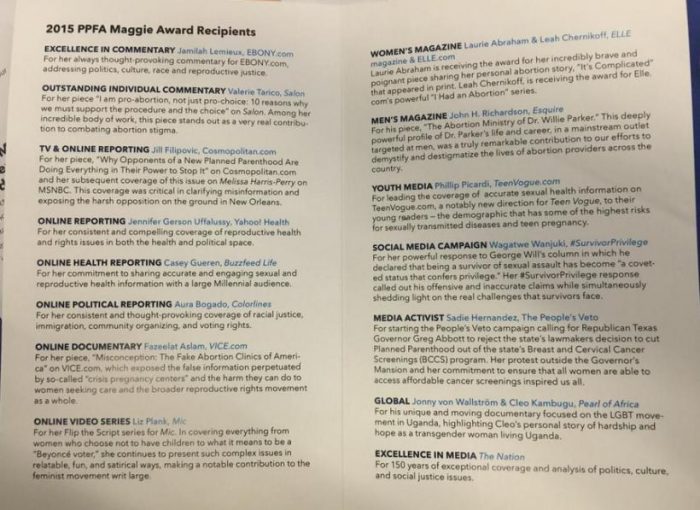 Interestingly, no one seems to be pressured to return or disavow the award, nor is Planned Parenthood called out for its failure to disavow Sanger’s eugenic philosophies, upon which Planned Parenthood was founded.Planned Parenthood receives half a billion in tax dollars annually, thanks to Congress, which continues to fund the organization despite its known abuses and despite regulations showing that government dollars can be removed when providers of Title X Family Planning funds fail to report child abuse.

Sexual abuse and rape are wrong, whether committed by Hollywood moguls or covered up by abortion businesses. The question is, will the victims ever receive justice?