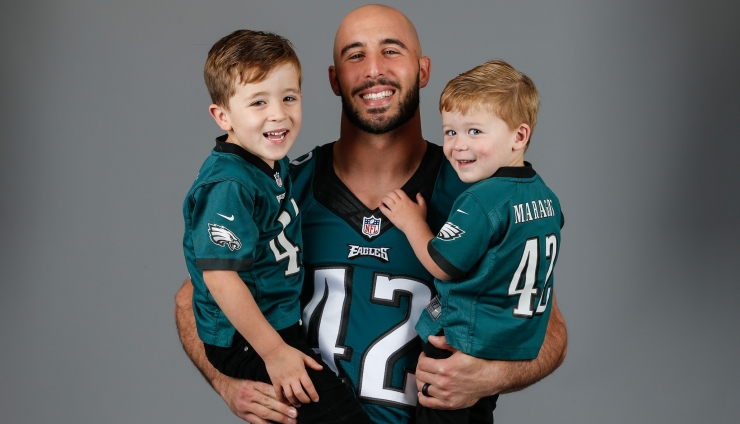 (Pregnancy Help News) While his upcoming appearance at a kickball tournament isn’t likely to help Philadelphia Eagles free safety Chris Maragos get ready for the 2017 NFL campaign, he still considers it among the most important things he’ll do this offseason.

Maragos, who won a Super Bowl ring with the 2013 Seattle Seahawks and is entering his fourth season on the Eagles, is set to participate, along with his wife, Serah, at a fundraiser for AlphaCare’s “Kick It for Life” fundraiser May 27 in Philadelphia.

A pro-life pregnancy help center that operates a mobile medical unit, AlphaCare began serving women just a wall away from the shuttered abortion clinic of convicted murder Kermit Gosnell this January, with the ultimate goal to purchase and repurpose the clinic itself.

Supported by the community since 1981, AlphaCare’s latest fundraising endeavor will go toward a $25,000 goal to fuel the mobile unit, which offers free pregnancy tests, ultrasounds and social services to women in need.

Maragos, an outspoken Christian, said he and his wife were drawn to partner with AlphaCare because of its distinctly Christ-centered approach to meeting the needs of women who feel that abortion is their only way out of a desperate situation.

“Each mother with doubt in her heart needs all of us,” Maragos said. “She needs us, she needs Jesus, to rally around her, to soothe her pain and lift her spirits. She needs to know that she is not alone.”

Pregnancy, Maragos pointed out, is challenging enough even under ideal circumstances. By every measure from the pro-abortion Guttmacher Institute, for example, most women who resort to abortion do so because they feel alone and abandoned by their families and—most prominently—the father of their unborn babies.

Recalling the joy he and Serah experienced in finding out they were expecting each of their two sons, Micah and Mason, Maragos reiterated the need for organizations like AlphaCare, which come alongside women facing unexpected pregnancies in over 2,500 communities around the U.S. and all over the globe.

“Even if you’re joyful about your pregnancy, there are questions and doubts,” Maragos said. “Now, imagine if you took all of those burdens onto yourself and kept your pregnancy a secret from the father, from your parents, and from your friends. If you don’t believe, you bear all of those burdens yourself. It must be crushing. No wonder so many women decide that it is too much. It’s no wonder that they think the solution to rid themselves of their ‘problem’ is their child.

“Today, more than ever, AlphaCare goes wherever a woman needs the love of Jesus, as well as the AlphaCare services that go with it.”

Editor’s note: This article originally appeared at Pregnancy Help News, and is reprinted here with permission.