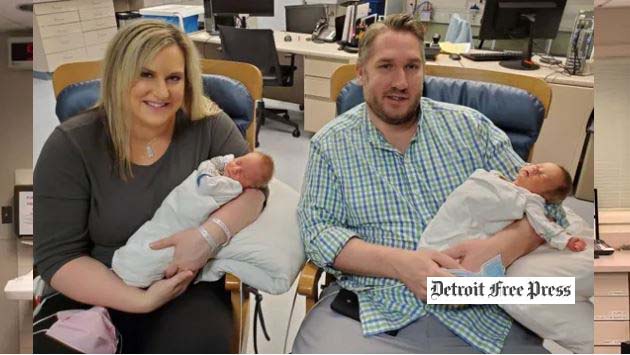 The parents of newborn twins in Michigan have finally met their babies after they were forced to self-quarantine due to being diagnosed with COVID-19.

Andre and Jen Laubach thought they had two more months before the birth of their sons when the couple began experiencing symptoms of COVID-19. They were awaiting testing results when, at 32 weeks gestation, Jen’s water broke. The evening before, her husband’s symptoms had worsened and he now had a violent cough, they told a local news station.

“The look on his face just told me, I want to go there,  you know, go and be there for you, but I physically can’t,” Jen recalled. Still, she got the car keys and said she would drive and the pair began the trip to Beaumont Hospital. It was about 30 seconds into the drive, said Andre, when the primary care doctor called and said that Andre could not come to the hospital for the twins’ delivery. He had officially tested positive for COVID-19. Jen was negative, but soon learned it was a false negative.

“As I was leaving I was thinking am I ever going to see him again,” Jen told Good Morning America. “He was in really bad shape.”

Jen dropped Andre off and went on to the hospital without him, delivering sons Maksim and Mitch on April 3, healthy but two months ahead of schedule. They had to remain in the Neonatal Intensive Care Unit. Once at the hospital, Jen was treated as if she did have COVID-19 and later tested positive. 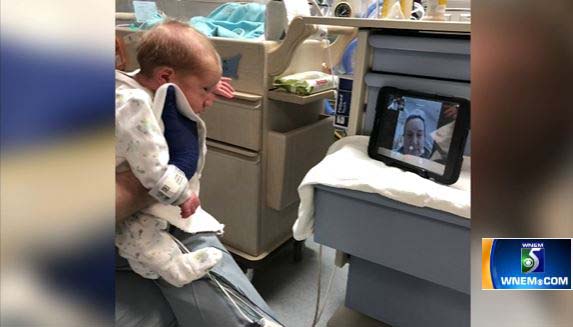 A nurse holds up one of the twins for Jen to see on video. Screenshot WNEM.

With both parents testing positive for the virus, they had to be quarantined for at least two weeks and be cleared of the virus before they were able to meet and hold their babies 20 days after their birth. “It was very emotional because at that point it had been three weeks since their birth. It felt like I gave birth and they were just gone,” said Jen.

Baby Mitchell has since gone home from the hospital and they hope little Maksim will soon follow. He is off the ventilator and feeding tube and making progress.