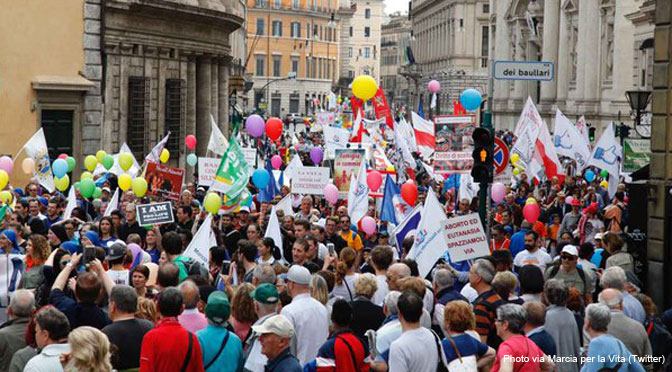 On Sunday, tens of thousands of pro-lifers marched through the streets of Rome during the city’s annual March for Life. Members of Italy’s pro-life movement sang songs and waved signs calling for the repeal of the nation’s “Law 194,” which legalized abortion in 1978.

Breitbart reports that the crowd, including religious leaders, activists, and families, “marched through Piazza Venezia and then through central Rome until finally crossing the Tiber River and parading into Saint Peter’s Square.” Organizers of the march announced that over 100 pro-life organizations participated in the event, including activists from 30 countries.

The conclusion of the march was scheduled to coincide with Pope Francis’ midday prayer at Saint Peter’s Square. The pope, who has been an outspoken advocate for pro-life values, reportedly greeted the marchers with words of encouragement, according to Catholic News Service:

The pope greeted the marchers, who were led by U.S. Cardinal Raymond L. Burke, patron of the Knights and Dames of Malta; Archbishop Luigi Negri of Ferrara-Comacchio, Italy; and Auxiliary Bishop Athanasius Schneider of Astana, Kazakhstan.

… Although the march is not sponsored by the Catholic Church or a particular Catholic group, hundreds of priests and religious joined the marchers.

CNS also reports that, in addition to supporting the end of legalized abortion in Italy, some marchers held signs encouraging Italian lawmakers to reject proposed legislation that would legalize euthanasia.