A story to rock us to our cores. 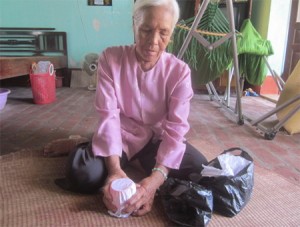 In Vietnam, it is a lone elderly woman – recently joined by an elderly man – who is choosing to love discarded and abandoned babies. Pham Thi Cuong has single-handedly discovered and buried 4,000 babies who were dead or left to die. It seems that most of the babies were victims of abortion, but some were simply unwanted and left to die after birth. Pham Thi Cuong cannot bring herself to leave these babies all alone – dead or not – without a touch of love and heartfelt kindness. From Thanh Nien News:

Pham Thi Cuong, 74, whose hair is silver and who has trouble breathing, pedals around ten kilometers each day on her bicycle searching for disregarded embryos from abortion procedures, and in some cases, the little bodies of babies who had been born and abandoned.

Many of them are put into plastic bags and thrown onto the sidewalk where they become prey for insects and other animals, making it difficult to identify them, she told news website VnExpress in a Thursday report.

Cuong cleans them and holds them to make them feel warm. Then she covers them cloth and places them in small jars, reciting prayers before giving them burials at a local public cemetery.

The woman said after ten years, she is still haunted by the first experience which made her decide to make the grim task a regular part of her life.

“Its body was black and blue and there were ants all over it. Such a painful sight,” she told VnExpress.

Cuong said she was going to the market to sell some vegetables and saw a black plastic bag on the sidewalk surrounded by flies and bugs, the sight of which made her nauseous.

“There was something moving inside and I just figured a family had thrown out their dead animals, so I just kept going. But then I didn’t feel right and felt the urge to go back.

“I was startled to find a newborn infant breathing with difficulty when I unfolded the bag.”

Cuong took the baby around the neighborhood in search of a new mother capable of feeding it with breast milk, but the baby died before she managed to find one.

Deeply saddened by the experience, this sweet elderly lady decided that she would not stand by in the face of such unspeakable horror. Though no one else may care, she would. Pham Thi Cuong leaves her job – every single day – for a break and spends that break searching for these lost babies. No matter what condition she finds them in, she rescues them from the trash and gives the little ones a burial befitting a child. Pham Thi Cuong does not shrink back, even when the babies’ bodies are rotten or being consumed by animals. No circumstance has been able to overcome her love. She said:

But then I thought about their really short life of being abandoned, not even having a place to rest when they died, I still tried to bring them home.

Despite this lady’s own poverty, medical condition, and personal needs, she endures criticism to love the babies of Vietnam. Instead of looking inward, Pham Thi Cuong looks outward to find little ones who she can shower with love. Dead or alive, they will have one person who loved them and cared for them in this world. Pham Thi Cuong knows it’s the least she can do for the least of these.

This incredible story of devotion and love ought to rock us to our cores. If a poor old lady who is unable to provide for her own needs can love this much, endure the critiques of others, and do her best to save children, then what are we doing? And is it enough?