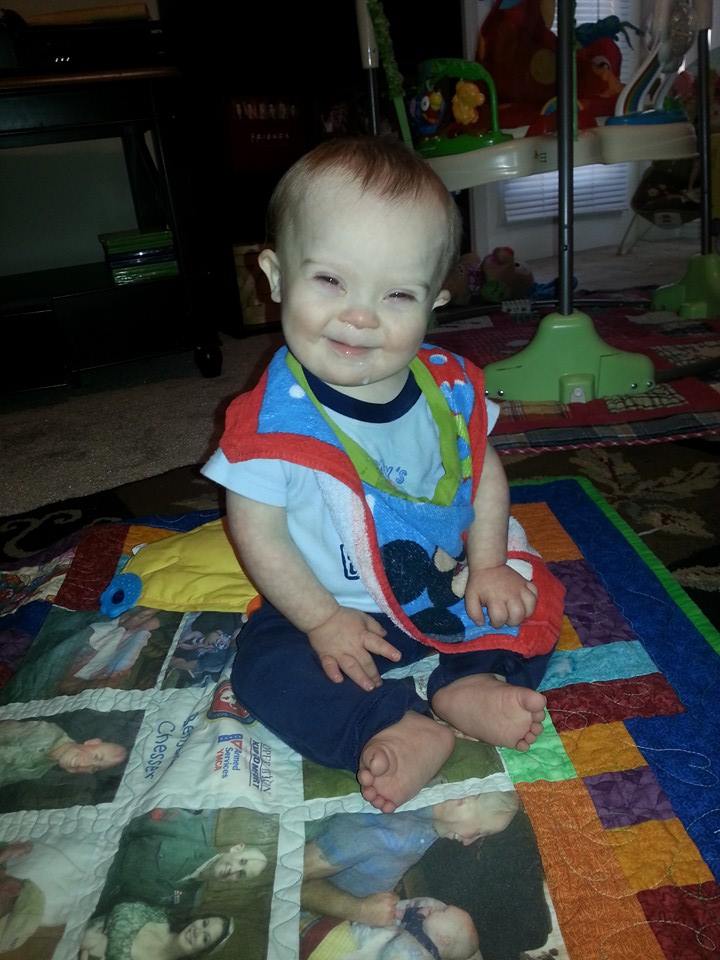 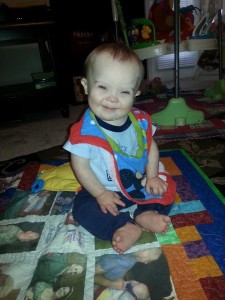 This is my son Wyatt. He’s 19 months old. He loves Mickey Mouse Clubhouse, the songs from Frozen, playing with his older brother, and being cuddled. He also has an extra chromosome. Wyatt has Down syndrome.

What he does not have, however, is a super power.

There’s a blog post, published in early January, that went viral. It was written by Kari Wagner-Peck, explaining how she told her son he had Down syndrome. Down syndrome, she told him, was a super power.

“OK. Well, I want to tell you something. Yeah… you… have a super power. It’s called Down syndrome.”

My son looks at me wide-eyed and makes like Mr. Universe with his biceps.

This isn’t so bad.

I continued, “Down syndrome is an extra chromosome in your body…”

He started feeling around his mid-section.

“You can’t see or feel your chromosomes, they are so small.” I am realizing the scientific route is too abstract.

“See, Down syndrome gives you almond-shaped eyes and a terrifically adorable flat nose. And it gives you super powers. Some of your super powers are big love, photography and… um… um… farting. It also made you a little small, talking and being understood is hard for you right now and learning some things takes more work.”

This blog post was applauded and shared all over the internet.

Wagner-Peck is hardly alone in turning disability into super powers. There’s evidently even a book that is doing the same thing. These kids have super powers of “melting hearts,” and “being perfect,” and “lifting moods with laughter.”

And frankly, I’m getting sick of it.

Just like everyone else is what we should be striving towards when it comes to acceptance. Pretending that our kids’ awesome sense of humor is a super power doesn’t help make them just like everyone else. Sure, Wyatt is an extraordinarily sweet, loving baby. But guess what? So is his older brother. Wyatt doesn’t need a fake super power to be loved and accepted by the people around him. He’s accepted and loved for just being who he is. I’m not going to come up with a sense of fake positivity to try to convince people that, see, Down syndrome is great!

Here’s the thing: I get it, I really do. Not too long ago, people with Down syndrome were institutionalized. They didn’t have very long lifespans or much of a chance at having an independent future. Even now, most women who receive a prenatal diagnosis will choose to have an abortion. There’s so much negativity towards Down syndrome, and disabilities in general, that it’s like we have to be extra-super-positive in an attempt to change that. But how helpful is it, really, not to be realistic about our children? To continue putting them in a box, to continue to set them apart from everyone else?

I’ve been extremely open about the journey we had to take after receiving a prenatal diagnosis, about the emotions that came with it, and the hardships that come with raising a child with Down syndrome now. It’s actually not all that different from raising my other two children, but it would be a flat-out lie to say that it isn’t hard sometimes. It is hard.

It’s hard having to go to therapy just about every single day of the week. It’s hard seeing him struggle to do things that come so easily to other children. And yet, for too many parents of kids with Down syndrome I know, it’s almost like there’s a wall of silence. We aren’t supposed to talk about how hard it can be, about our fears and struggles. Or at least, we aren’t supposed to talk about them outside our little Down syndrome community. We have to put on a happy face. We’ve got to stay positive, all the time – as if being realistic about Down syndrome and what it is will set us back a decade or two. But the inspiration porn sets us back, too. It just sets us back in a different way. Talking about how little Bobby with Down syndrome is a super hero because he really loves playing soccer and it’s just so great that he’s even able to do it isn’t inspiring. It’s condescending.

People with Down syndrome are complete people, and yes, they have struggles. But here’s the thing: everyone does. Every single person on this planet has challenges and hurdles to face, and they’re individual to each person. Yet no one goes around saying that someone with the typical number of chromosomes has a super power because man, he’s got a great smile.