(Pregnancy Help News) “I am consistently amazed by what happens when women are heard and seen,” said Jemima Geisert, clinic operations manager at Options Pregnancy Resource Centers of Albany, Oregon. Before her eyes, a young woman transformed from timid to tenacious. All it took was a someone to trust and a tiny heart beating on an ultrasound.

Geisert served as the patient advocate in her organization’s mobile clinic the day Andie* found the RV parked near her university campus in Corvallis.“She was our second patient of the day,” Geisert said, “and she came up crying from the start, slowly, just slow tears.” 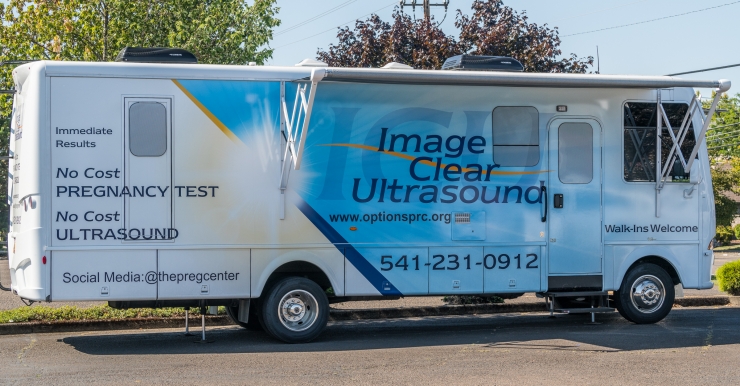 Straining to hear Andie’s voice through her mask, Geisert walked her through the intake process and guided her to the private bathroom for her pregnancy test. Later, while nurse Athena Jennings processed the test, Andie returned to the front room where she timidly chatted with Geisert. First, only the basics came out. She was a student, in her mid-twenties. Family out of town. Involved in a relationship.

Then as Geisert listened, Andie unveiled the reasons for her tears. She already had a young child. She would have had another, if shame during her first pregnancy hadn’t driven her to obtain a secret abortion in her second. It was a secret she had kept hidden. In that moment, Geisert knew Andie trusted her. “It is beautiful to be in the room with someone who is telling you things they have never told anyone,” she said, tears rising in her own eyes. “They trust you enough to share. You are ‘safe.’”

Andie’s pregnancy test came back positive. But it was too early to perform an ultrasound for her. Geisert glanced again at Andie’s intake form. Regarding her intentions for her pregnancy, she had written, “Undecided.”

Through her mask, Andie described her inner conflict. On one hand, she didn’t want to go through another abortion. On the other, she dreaded telling her parents, both active in church leadership. At the same time, her partner wanted her to parent this child. Andie could see no way forward.

“She was very distraught,” Geisert said. “I could feel she was just tired of all this.”

Since Andie had opened the door to discussing faith issues, Geisert raised a crucial question. “I asked, ‘What does Jesus think of you?’” Geisert said. “She had a great answer. She knew. That was what her dad said to her the first time. She said, ‘Thank you for reminding me.’”

Andie left that day with an appointment for an ultrasound the following week. As she walked away, tears still trickled into her mask, and the answer on her form still read, “Undecided.”

Strength from a heartbeat

“When she came in for an ultrasound, I expected her to be a little bit more upbeat,” Geisert said. “It had been a few days, and I thought she would rally around it. But it was the exact same. She was crying, slow tears again. I sat down with her, asked how she was feeling. She had been really sick, so she was going through that, too.”

Since her last visit, Andie had confided in two trusted relatives. “That was pretty big for her,” Geisert said. “She said they both supported her in parenting and said they would help her tell her parents. But she hadn’t done that yet.”

“In the ultrasound room, our nurse asked her for a brief, updated health history, and asked if she had made a decision on what she was planning to do,” she said. “She was still undecided. That surprised me; I thought she was heading toward parenting.”

Andie’s response confirmed Geisert’s training never to assume she knew what women wanted. “Assumptions are worth a whole lot of nothing,” she said.

As the ultrasound took place, Andie remained quiet, asking only an occasional question. Then halfway through, Jennings asked her if she wanted pictures. Andie answered immediately, “Yes!”

With the scan behind her, Geisert asked Andie how she felt. “She looked at me and said, ‘Better!’” Geisert said. “I’d never heard her voice that strong. It was like I was talking to a whole different person. She had stopped crying, she was smiling at things we said, and her voice was strong and clear. There had been a transformation.”

This time when Andie walked away, she left behind an exit survey that read, “I wasn’t quite sure what I wanted. This gave me a sense of purpose.”

For Geisert, Andie’s visit left a lasting impression. “To see her completely change into who she really is— I feel like I got to know her; that’s who she is,” Geisert said, “It was like a fog had cleared. She laid eyes on that little baby and said, ‘OK.’”

According to Karen Tameling, executive director at Options Pregnancy Resource Centers for nearly 25 years, roughly one-third of all their patients come from the mobile clinic, which serves both Corvallis and Philomath. The brick-and-mortar clinic in Albany brings in the remainder. With three unique locations, the clinics reach a broad cross-section of women.

Tameling said their patients range from Mam-speaking Guatemalan immigrants to the diverse students attending Oregon State University, and from blue-collar to white-collar populations.

After launching in January 2019, “Naomi” the mobile clinic started serving patients three days a week just as COVID-19 hit. After re-launching Naomi with new safety protocols in place, Tameling noted that demand for mobile services remained strong. “Now we have days with three to four patients in a given day, which is a lot for a nine-to-three shift,” she said.

In addition to abortion-vulnerable women, the clinics see several patients whose obstetricians have postponed their appointments due to COVID.

“We get a lot of anxious patients with a history of loss, who just want to have an ultrasound to see that baby’s heartbeat,” Geisert said. “It’s been a very special opportunity to minister in a place of fear and anxiety. We get to love them in that place.”