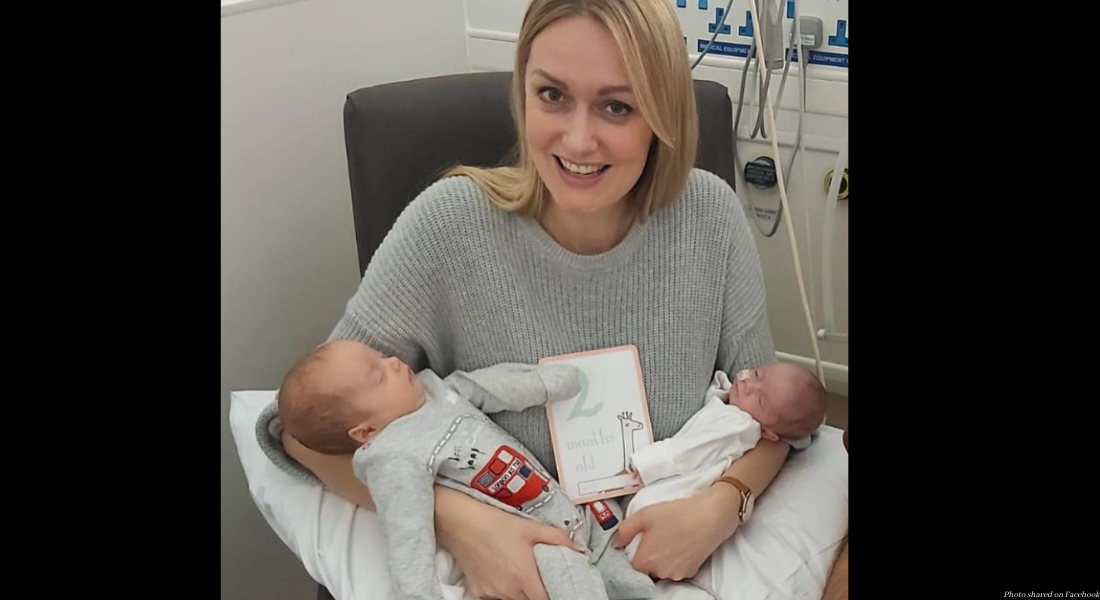 A woman in the United Kingdom gave birth to a rare set of twins, conceived weeks apart, in a heartwarming story that has captivated the world.

Rebecca Roberts and her partner, Rhys Weaver, told Good Morning America they had been trying to get pregnant for years with no success. After going on fertility medication, the couple was thrilled to learn they were finally going to have their much-longed for baby. At their first ultrasound, they saw their baby and heard the heartbeat, and were relieved to know everything was well. “I remember walking away from the very first scan so happy,” she told the Washington Post.

But the thrills kept coming when Roberts saw the doctor for her 12-week ultrasound. “It was really, really shocking to be told there were two babies instead of one,” Roberts said in her interview with Good Morning America. “Then they told me there was a three-week size difference between the two babies that the doctors couldn’t understand.”

According to Roberts’ OB/GYN, Dr. David Walker, they originally struggled to figure out what caused the size difference before diagnosing her with superfetation. This rare condition occurs when an already-pregnant woman conceives another baby. Walker said there are very few cases of it occurring in medical literature, and they had to take time to perform multiple ultrasounds to be sure of what had happened.

READ: AMAZING: Meet the twins who were born days apart and in different months

“We were concerned because the second twin was much smaller,” he told the Washington Post. “It was only by regularly scanning and seeing that the rate of growth was consistently three weeks behind that we realized it was superfetation.”

A 2008 report published in the European Journal of Obstetrics & Gynecology and Reproductive Biology found fewer than 10 cases of superfetation having taken place in the entire world.

The news was bittersweet for Roberts; she discovered she was having twins without Weaver there. Due to COVID-19 restrictions, he wasn’t allowed to go with her for the ultrasound. “When I found out we were having twins, he was out in the parking lot,” she said. “There was such a mixture of emotions.”

It only got harder when the couple was told the younger of their twins, a girl they named Rosalie, may not survive. “What came after getting pregnant was just such incredible hard work. It wasn’t all happy and rainbows like you expect a pregnancy to be. It was quite scary,” she said. “With twins it’s scary already and then because of my age and the fact that they were conceived at different points, and then we were told that all the odds were against Rosalie.”

At 33 weeks, Roberts had labor induced, because Rosalie had stopped growing. Her son, Noah, weighed 4 lbs, 10 oz, while Rosalie weighed just 2 pounds, 7 ounces. Noah had to spend just three weeks in the NICU, but Rosalie was there for over three months. By Christmas, though, Rosalie was strong enough to go home, and the family was together again.

And despite their age difference, that twin bond is still there. “When we lay them down next to each other on their play mat, they look at each other, reach out and touch each other, and talk to each other as well,” Roberts said. “It is so beautiful to watch.”

Roberts and Weaver have been documenting the twins’ lives on their Instagram page, where they hope their story will give hope to other families. “We want people to be able to continue to watch as they grow up,” Roberts said. “Miracles can happen, and my children are proof of that.”