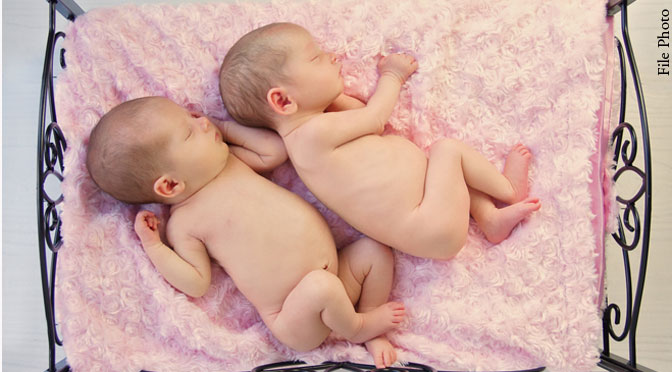 In January 2013, Natalie Whitefox was told she was suffering her third ectopic pregnancy and she would need surgery to remove her one remaining fallopian tube and the embryo she was carrying. But against all odds, her miracle baby relocated to her uterus just before the surgery, and they soon learned it was two babies, not one.

“I was stunned,” she told the Mirror. “It was the best news. We had gone from believing we had lost our baby to discovering we were having twins. We had no idea how but somehow our babies had survived. I just sobbed and sobbed but this time they were tears of happiness.”

Whitefox was only 18 years old when she was diagnosed with endometriosis. Concerned that she may never carry a baby to term, she and her partner Ros Whitehead were thrilled when their son Harry, now five, was born in 2010.

Sadly, Whitefox went on to have two ectopic pregnancies which led to the loss of both babies and the removal of one fallopian tube.

She was excited to learn she was pregnant again in January of 2013, but severe stomach pains and scans showed that she was having yet another ectopic pregnancy.

“I just felt like my world had fallen apart,” she said. “I just wanted to curl up into a ball and never open my eyes again. But 24 hours later, blood tests revealed that despite the fact that my last fallopian tube had been taken away, I was still pregnant. Somehow the embryo had travelled through into the womb.”

Whitefox and Whitehead were shocked, as were doctors, who told her she could miscarry the twin girls whom she calls a “miracle.” However, Heidi and Halle were both born healthy.

At 16 months old, the twin girls walked down the aisle as their mother and father were married.

“We have been through such an emotional roller coaster over the last few years, and never in my wildest dreams did I think I would have two beautiful little girls as bridesmaids. The day was absolutely perfect. We couldn’t have been happier. It felt like all our Christmases had come at once. We feel so blessed to have three beautiful children and it meant so much that they were there to help celebrate our very special day.”