Media coverage of Planned Parenthood is largely favorable, but the same can’t be said for pro-life healthcare organizations. Media bias was evident in a recent Washington Post report about the pro-life Obria Group, focusing on a Title X grant recently issued to Obria following the Trump administration’s HHS rule change. While the changes prohibit taxpayer funds from going to facilities that commit abortions, HHS allows funding to groups which offer, according to the HHS website: 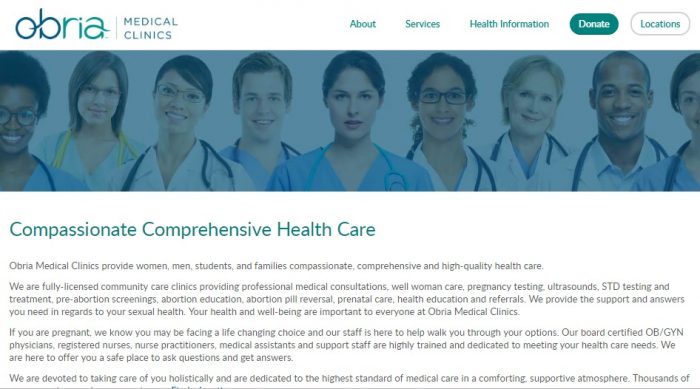 Obria’s website states that the health care agency provides prenatal care services, STD testing and services, well women visits, as well as sexual risk counseling, among other services. According to Washington Post writer Ariana Eunjung Cha, HHS granted Obria $1.7 million (2019), and if renewed, the grant could total $5.1 million — and that’s what the Washington Post doesn’t seem to like: Planned Parenthood, the nation’s largest abortion provider, is potentially losing Title X taxpayer funding because they refused to drop abortion services… and pro-life groups are now receiving the funding. Below is Live Action News’ analysis of the WashPo‘s claims, and a list of what the WashPo and other media outlets fail to point out about Planned Parenthood even as they critique pro-life centers.

1. Claim: Obria “appears to be modeled after faith based crisis pregnancy centers but–with a twist.”

Media fails to mention PP appears as a health care organization while it is highly political and abortion driven, and founded on eugenic philosophies.

2. Claim: Obria counsels teens to “move away from sexual risks.”

3. Claim: Obria is designed to “persuade” women to continue pregnancies.

The use of the word persuade by WashPo implies that women are being swayed against their wills to carry their babies to term. Media fails to mention:

Media rarely, if ever, notes that Planned Parenthood is strongly pro-abortion, instead downplaying its abortion business and advocacy.

Media fails to mention that many of these groups are actually strictly abortion rights groups.

Where has the Washington Post ever published the “abortion views” of HHS staffers who have approved Planned Parenthood grants? 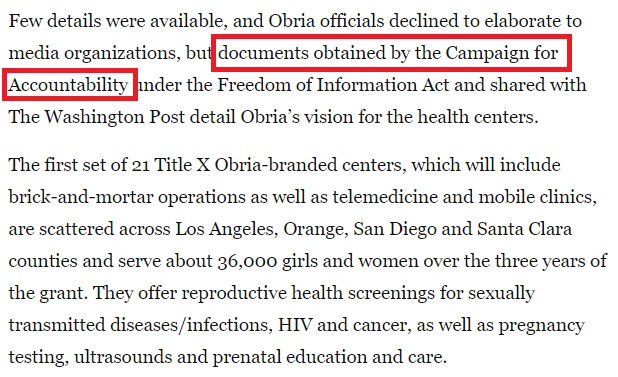 10.  Claim: Obria’s vision was revealed in “Documents obtained by Campaign for Accountability (CFA)”

Media failed to mention that CFA is pro-abortion and its express purpose is to “use[] research, litigation, and aggressive communications to hold the anti-choice movement accountable.” 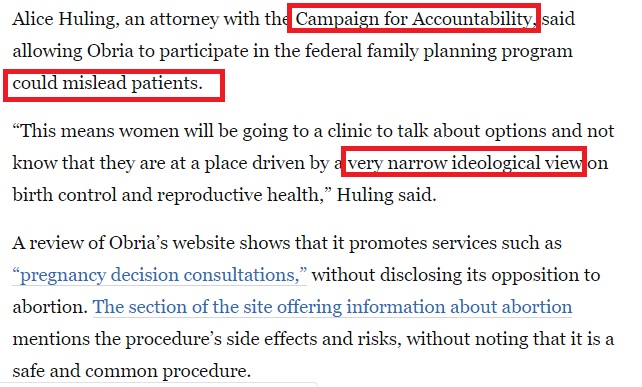 11.  Claim: Obria “could mislead patients,” according to the pro-abortion CFA spokesperson and is “driven by a very narrow ideological view on birth control and reproductive health.”

13.  Claim: Obria’s website details abortion risks without noting “it is a safe and common procedure.”

Planned Parenthood has received approximately $60 million per year from the taxpayer-funded Title X program. According to Bustle other abortion agencies have also been funded:

Media outlets willingly recite Planned Parenthood’s talking points without seeking comment from pro-life groups. But when media outlets such as WashPo highlight pro-life organizations like Obria, they tend to quote biased, abortion-leaning organizations (which do not back up false claims) in an effort to appear balanced. Planned Parenthood rarely receives similar scrutiny. Where is the balance for the pro-life side?