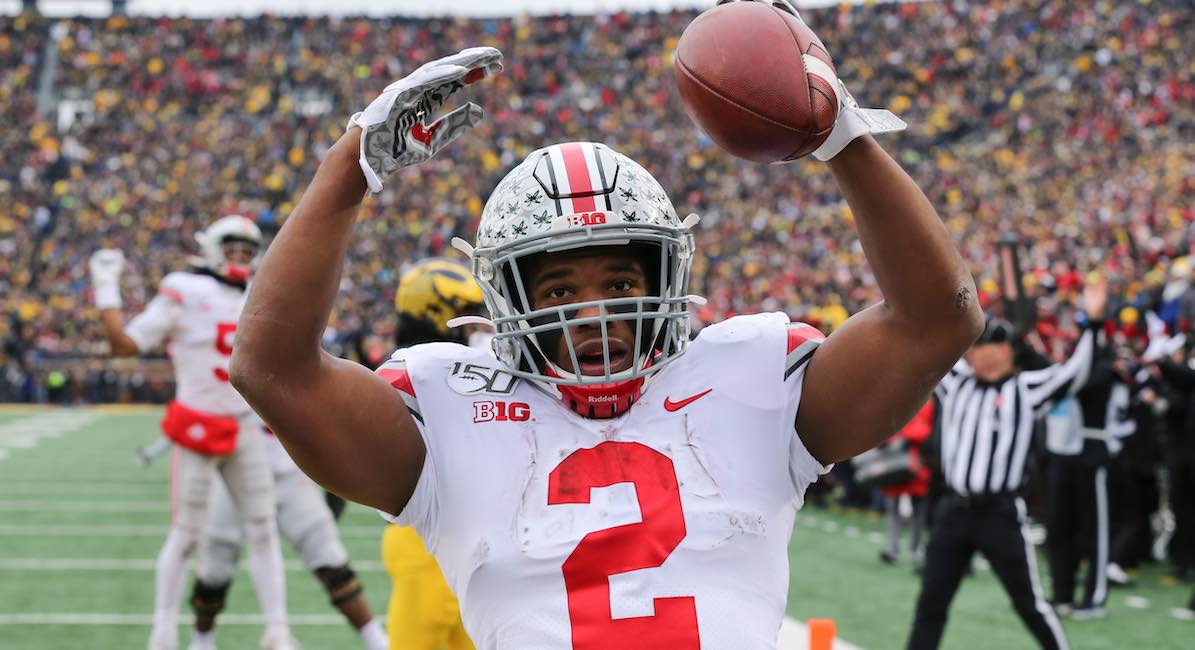 (Pregnancy Help News) On the Saturday after Thanksgiving—rivalry weekend in college football—Ohio State running back J.K. Dobbins destroyed Michigan’s upset hopes by rushing for a whopping 211 yards and four touchdowns in the Buckeyes’ 55-27 win over the Wolverines.

Dobbins’ performance was one of many of note for the dark-horse Heisman Trophy candidate. With the Big 10 championship game coming up this weekend and a likely berth in the college football playoff ahead, Dobbins is already Ohio State’s #2 all-time rusher and perhaps the NFL’s top running back prospect.

But there’s a story behind Dobbins, and Fox Sports announcer Gus Johnson laid it out during a replay of Dobbins’ final touchdown scamper against Michigan.

“J.K. Dobbins’ mom, Mya Grounds, became pregnant when she was 18-years-old,” Johnson told the national television audience. “She went to the doctor because she was thinking about aborting the baby but changed her mind. That baby turned out to be that young man (as TV showed Dobbins receiving congratulations from teammates), J.K. Dobbins, who she calls her ‘miracle baby.’”

Forty-six words. That was it. No social statement from Johnson, no berating of those who might disagree with Mya and her decision to choose life.

As Twitchy reports however, Johnson’s story left the left in a frenzy.

One Twitter user asked for Johnson’s firing. Another asked if “Fox just pushed an anti-abortion message.” Still another asked if it was necessary to discuss “a mother’s reproductive choices.”

Many thought Johnson stepped out of bounds, sharing too much information. But, did he?

For the answer, let’s go to Johnson’s wrap up of the story, where Johnson shares that Mya calls J.K. her “miracle baby.” For any fan, there must be a story behind this, waiting to be told. What if J.K. Dobbins almost lost his life at birth? What if he overcame a debilitating illness? In short, what was the miracle? Inquiring fans want to know.

J.K. Dobbins is a miracle because his mom, as an 18-year-old, faced an extremely difficult decision, one we see daily in pregnancy help ministry. We—all of us in this work—understand the heart-wrenching deliberations a woman goes through at a time like this.

It’s possible that Mya had voices in her life, telling her to end the pregnancy. To move on with her life. To avoid being saddled with a child she could not possibly parent at such a young age without the resources she thought she might need.

J.K.’s father, Lawrence, was in the picture but headed to college to pursue a track career at Lincoln University near Philadelphia, 1600 miles away from he and Mya’s hometown of LaGrange, TX. Mya was taking classes at Blinn College in Brenham, TX. Life would not be easy.

J.K.’s dad quit school at Lincoln, came back to Texas and tried football at Blinn. He quit there, too, and things were never right for him. He was arrested a few years later, then died of a stroke while in prison in 2014. Lawrence Dobbins and Mya Grounds never married.

J.K. however, kept fighting for his dream, even when an injury kept him out of almost all his senior year of high school. Though he faced more challenges than many of his teammates, he became a star for the Buckeyes.

And on Saturday, he was yet another hero in Ohio State’s run to a possible national championship. And when he is drafted by the NFL in a few months, J.K. will be a very wealthy man.

Though Twitter’s naysayers called Johnson’s story, “too much information,” Johnson did what good announcers do. He did his homework.

Mya told Johnson her story. She told Johnson that J.K. is a miracle. And she told him exactly why. While some on social media didn’t want Johnson to share this information with viewers, J.K’s mom most certainly did want her son’s story told.

If anyone has a problem with Gus Johnson telling the story of J.K. Dobbins, they probably need to take it up with Mya. They should tell her she was wrong for telling the truth, for sharing that she considered abortion but believed choosing life was a better option.

Because you see, that’s what the left is truly angry about.

To the abortion lobby, it’s okay to have a baby—just not too many. They may not like it, but they don’t fuss about it too much. But Mya made the mistake of considering their option—abortion—and rejecting it. This was her first unpardonable sin.

But the second unpardonable sin?

Mya Grounds told her story. And in her true account, everyone now knows abortion came in second and the result is a story of hope, incredible success and victory. Words like “hope,” “success” and “victory” have no place in the abortion culture.

I don’t know if Gus Johnson is pro-life. He may simply be a reporter and announcer who believes in pursuing fascinating stories, wherever they lead. And I don’t know Mya Grounds’ politics, either. It doesn’t matter.

What does matter? Two things.

And second? On a cold, cloudy day in Ann Arbor, Michigan, a running back named J.K. Dobbins proved, once again, the circumstances of one’s birth don’t get to dictate how a life story unfolds.

My college football allegiance to Auburn University and my beloved Tigers is well known. But after hearing J.K. Dobbins’ story, I can’t help but say, “Go Bucks!”