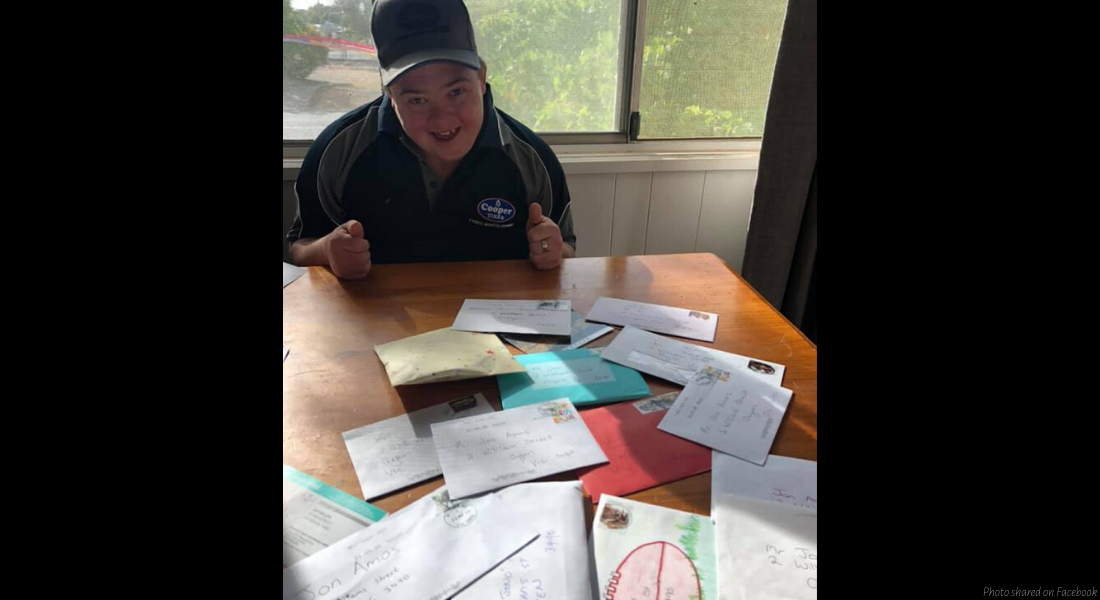 An Australian man with Down syndrome has been struggling with isolation during the COVID-19 pandemic, and thanks to the kindness of countless strangers around the world, that hardship has become a little bit easier. Jonno Amos has been receiving letters from around the world, which has been helping him cope with the difficulties of quarantine.

Amos, who lives in Ouyen in Victoria, Australia, not only has Down syndrome, but has also battled pneumonia several times and has a weakened immune system. As this makes his particularly susceptible to COVID-19, his family decided it would be best to keep him safe, and have him move in with his parents and older sister, Dee Amos. But his sister explained to Yahoo! Australia that the transition was difficult for him. “He had just celebrated his birthday with about 120 of his family and friends, so to go from that to suddenly being in the one spot, he has really struggled with that,” she said. “Jono is such a social butterfly and everyone in our community knows him, he loves going to the supermarket, he loves going to the bakery for a hot chocolate and having a talk with people so that’s been the hardest part for him.”

READ: Community comes together to build tiny house for man with Down syndrome

He also wrote out his frustrations himself on his Facebook page, explaining that he was grateful to everyone for staying home and trying to keep him safe, but that being stuck at home was difficult for him. “I’m starting to get annoyed at being home now. I want to go camping and I want to go up the street. I want to talk to people like I do every day,” he wrote, adding, “[I]t’s not always fun and games here. Sometimes I get angry and annoyed because my life has changed so much over the last two weeks and I don’t know why.”

So a family friend took action, posting on Facebook asking people to send letters to help lift his spirits. “Our friend suggested setting up a Facebook event asking people to send letters and by the next night we had people from our community dropping things in the letterbox for him,” Ms. Amos told Yahoo! Australia. “The first night he got three letters and he woke up the next day and there was a few more, the next day he woke up to a delivery of fresh scones because a local lady knew that he loved to go to the bakery.”

According to Ms. Amos, the letters have made a huge difference, while Amos himself said he cried happy tears at the packages he’s received. “He’s pretty impressed with the amount of mail he’s gotten, he got one today from Perth and he knows you have to get on a plane to get there, he keeps telling me he’s a superstar,” she said. “The joy on his face when he goes to the letterbox every day and he finds whatever he happens to receive is just priceless, it brings a light to our long days, like most people are expressing now.”