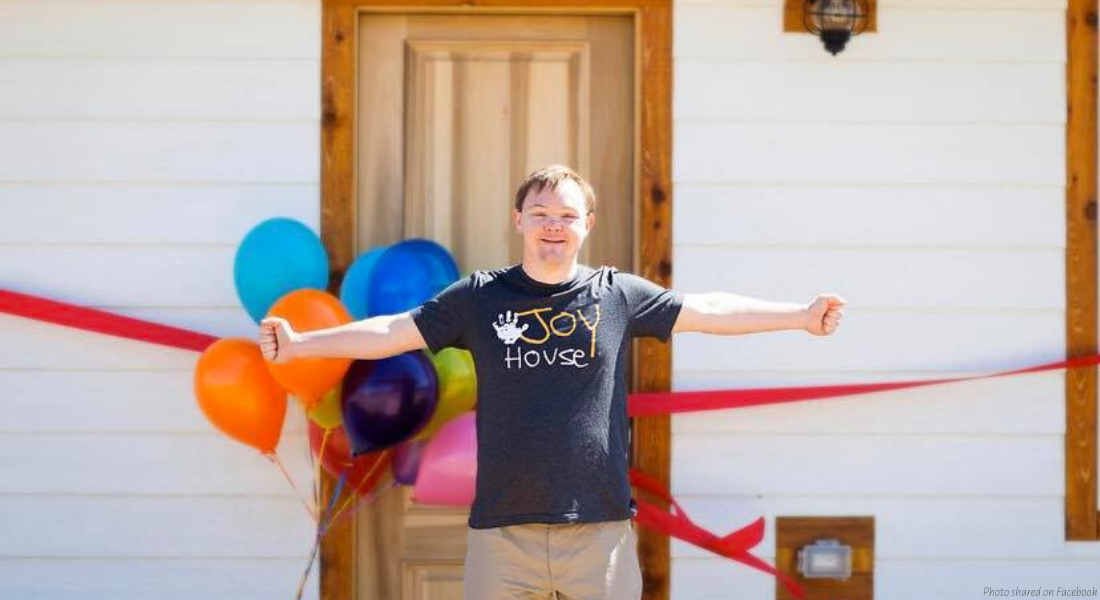 A group of neighbors recently worked together to fulfill the dream of a young man with Down syndrome — and after six months of dreams, planning, and hard work, Seth Truitt’s “Joy House” was unveiled.

Joe and Marla Truitt wanted to give Seth, their 28-year-old son with Down syndrome, the independence he so desperately wanted. But they also knew that he might need help. When they bought a property on the edge of Firestone, Colorado, with five acres of land, they knew exactly what to do. They decided to build Seth a “tiny house” on their property, where he could come and go as he pleased, have his independence, and still have the support of his parents nearby if he ever needed it.

“Wanting some independence from your parents is a natural part of growing up no matter who you are,” Joe told the Longmont Times-Call. “For a long time we didn’t know what that would look like for Seth, but we always felt like he would live with us, so we’re really excited about this.”

And it’s not just about independence; for Seth, it’s also for some much-needed adult time away from his younger siblings. “I need to get away from the kids,” Seth Truitt said, smiling. “One day I want to have my own car, get married and have kids.”

Joe Truitt works as a contractor with Mishler Construction, and the family estimated it would take about $40,000 to build the house. But they didn’t have the money, so the community stepped in to help. People from all around — friends, family, parishioners at their church, neighbors — donated their time and money to help Seth’s dream come true.

“The first thing that struck me about Seth was that he’s a real genuine person with such a tender and open heart for people,” Matt Tarka, a friend of Seth and the Truitts, told the Times-Call. “He just wants to help and be a part of people’s lives. He wants to contribute to whatever community he’s a part of and doesn’t stand back in the shadows or let his disability interfere with life. How fun would it be to help a young man like that fulfill a dream? Let’s get 20 or 40 people and get this built.”

So with some hard work and help, the Joy House was completed, as volunteers helped to finance and build it, even down to decorating the walls and helping put together furniture. In total, the house is 360 square feet, and includes a kitchen, a bathroom, a washer and dryer, a bedroom, and even a loft bed if a friend wants to stay the night. One of the decorations includes a “Joy House” sign with the handprints of everyone who helped build the home on it.

“When you know Seth, anytime that he receives anything, a gift of any kind, it’s the most fun thing to ever see,” Seth’s dad, Joe Truitt, told 9NEWS. “Because he gets so excited, no matter what it is. And so to see this, and to know how he was going to respond… I’ve been looking forward to this for a long time.”

“He is staying in his house tonight, by himself, for the first time,” Seth’s mom, Marla Truitt, added. “Because I asked if I could sleep on his couch, and he said no!”

When Seth finally got to cut the ribbon and go inside, the emotion was written all over his face. Seemingly tearing up, he clasped his hands over his face, shaking his head in disbelief as he repeated, “Oh, wow.”

People from all over the community came to the housewarming party, although they celebrated social-distancing style, everyone keeping six feet or more apart and no one coming inside the house itself. And even though the size of Seth’s house may be tiny, the love that built it knows no bounds.