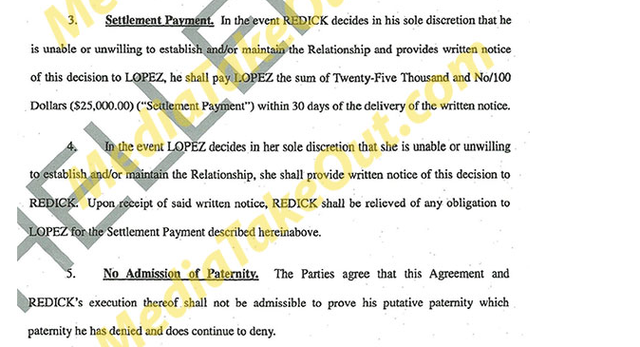 LA Clippers player J.J. Redick is not too pleased that his abortion contract with Vanessa Lopez has become public. Considering he describes himself as a Christian, that’s not entirely surprising. The contract, and Lopez’ allegations that the abortion was coerced, certainly don’t paint him in a flattering light. So what did Redick do? He took to Twitter, and denied that he ever got her pregnant:

I’d like to respond to the outrageous, false and malicious media reports regarding a prior relationship between myself and V Lopez in 2007-

Ms Lopez was not and has never been pregnant with a child fathered by me.

And Ms. Lopez did not and has never terminated a pregnancy of a child fathered by me.

Continued attention to these lies is severely damaging to myself and my family. Thank you.

It’s six years later, but it appears that Redick apparently hasn’t grown up any, as he still can’t take responsibility for his actions. The actual documents are out there, and they speak pretty clearly.

Pay close attention to his careful wording. Redick claims Lopez was never pregnant with a child fathered by him, and that Lopez never terminated a pregnancy of a child father by him. With that in mind, check out paragraph five from his contract: 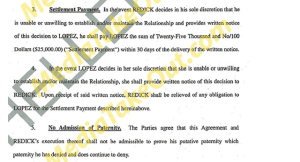 Evidently, Redick was planning ahead. One might wonder why exactly Redick would feel the need to pay for his ex-girlfriend’s abortion if the child wasn’t his, or why he’d also try to bribe her with offers of a relationship or $25,000… all for a kid he had no legal obligations to. It also doesn’t explain why his brother would continue to harass Lopez, or why his attorney would be contacting Lopez to ensure she went through with the abortion.

Far from calming the media firestorm, Redick has just made himself look worse, like a liar who will use women, throw them away, and then refuse to acknowledge what he did. Looks like Redick will be bro-choice to the end.