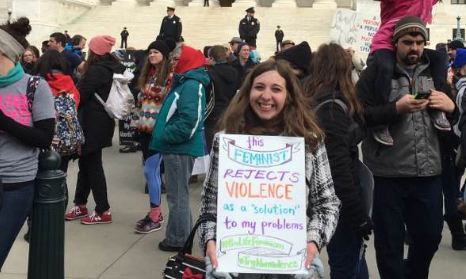 I have been attending every March for Life since 2010, when I first came as a freshman with Fordham University’s Respect for Life. This year, my daughter turned five months old in time for the special occasion.

I had the privilege of speaking at Humans of the March for Life, an event put on by Life Matters Journal. As executive director, Aimee Murphy explained that the theme of the event was “sonder,” which is “the idea that every other person is living a life as vivid and complex as your own.” In sharing my testimony, I like to think that I touched on that idea, having gone through an unplanned pregnancy. My unplanned pregnancy changed me forever. Here is my story:

I conceived my daughter in November of 2015, but failed to find out until January 4, 2016, just days before my 25th birthday. From the start, abortion was mentioned to me, though I quickly let the well-intentioned doctor know it would not be an option. It turns out I would be tested over how much of an option it was or wasn’t for the weeks to come.

Although I was together with my boyfriend when we conceived in November, we had broken up in December. The pregnancy was unplanned and quite frankly, a shock. Multiple people I knew mentioned, suggested, and even hoped for abortion. They figured that abortion would be the easier route — for me and for others.

The easier route isn’t always the better route, though. I knew that the child inside my womb was a human person, and that she had been since conception, since before I even know she existed.

Many would think that abortion would have been easier because I was single and facing an unplanned pregnancy. I was living in a separate state from my family and my daughter’s father. I was still working on my obtaining my degree, and I had not factored in if my job at the time would support a baby. Toughest of all was figuring out the relationship with the father. I began to wonder what it would be like if I wasn’t pro-life. I began to wonder if that meant I would have had an abortion.

Fortunately, I am pro-life, and this is a belief I apply in the difficult times of life. I knew that abortion would have ended the life of my daughter. She would never get to know this world, and people would never have the privilege of knowing her if I took her life in abortion. Because she had her own set of unique DNA since the moment of conception, there would never be another one of her ever again, whether she made it to birth or not.

I also knew how she would meet her untimely end if I had an abortion, since I myself have written about abortion procedures before, and have seen the non -graphic abortion procedure videos from Live Action. (Check them out here.)

I knew that abortion would wound me personally as well, because I was aware of how women have suffered emotionally from their abortions and how they’ve been dismissed. Having an abortion wouldn’t change that I had gotten pregnant and was single when I found out.

The only thing it was guaranteed to do was end the life of my daughter.

It’s possible an abortion wouldn’t have been so easy after all, then. I believe I was blessed with knowing all of this to keep me from having an abortion, no matter how angry and confused I felt.

I struggled, wondering if my thoughts meant I was less than pro-life. How could I let even the thought of abortion ever cross my mind? I found peace when I came to see it as a test of my values and my beliefs. I’ve heard that having doubts can strengthen your views, and I can say that is the case now from personal experience. My daughter, Sophie, was born in August, and I’m still advocating on behalf of the preborn. I’m happy to say I passed that test. Passing it has also given me quite a new perspective.

A friend said to me that she knew why women had abortions. In my situation, I knew, too. I felt even more deeply for women who have made that tragic decision because they let themselves get talked into it or because they weren’t blessed with the knowledge I was blessed with. I don’t mean that I’m any better than them. I don’t consider myself better than anyone. I just have a kind of empathy now along with my new perspective, and my drive to share the reality of abortion and the truth with women is stronger than ever.

I know just how important it is to encourage women facing unplanned pregnancies because of my own experience. I’m pro-life because life begins at conception and because abortion ends the life of an innocent, vulnerable, and defenseless human being. Abortion also hurts women. I’m pro-life because it’s pro-woman, too.

I won’t say that everything about pregnancy and parenting is easy. It’s hard. Post-partum depression is hard, and it doesn’t discriminate based on race, religion, political party, or socioeconomic status. Raising a child can be hard. I’m back together with Sophie’s father, but trying to work through relationships can be hard.

Abortion, though, is far worse.

As I have written before, the pro-life movement is not looking to judge women; it looks to help people. I’m right there with those women who have faced unplanned pregnancies, and I want them to know that they have help beyond abortion and the lies the abortion industry sells to them. There are people who love them and want to help them, even if they start out as strangers. Saying yes to life even in difficult circumstances is worth it. This is something I’m learning every day.  Crisis pregnancy centers have done wonders for women during and even after their pregnancies.