Many Americans are unaware that over half a billion in taxpayer dollars – their hard-earned money – is given annually to one of the most corrupt organizations in the United States. Planned Parenthood is the happy recipient of these funds that translate into over $1.4 million every single day. Every single day, Planned Parenthood also commits 887 abortions, which averages out to one abortion every minute-and-a-half.

But, if the fact that 37 unique, new, human lives are being taken every hour doesn’t force us to question why we are forking over taxpayer dollars to Planned Parenthood, there is plenty else that should.

On December 13, Senate Judiciary Chairman Charles Grassley referred Planned Parenthood Federation of America and four Planned Parenthood affiliates, including the largest one in the country and several that commit late-term abortions, to the FBI and the DOJ for “investigation and possible prosecution.” An extensive inquiry by the Judiciary Committee found that Planned Parenthood’s own documents and admissions revealed possible criminal conspiracy and other violations of the law in the sale of baby body parts. The report concluded: “PPFA not only turned a blind eye to the affiliates’ violations of its fetal tissue policy, but also altered its own oversight procedures enabling those affiliates’ practices to continue unimpeded.” 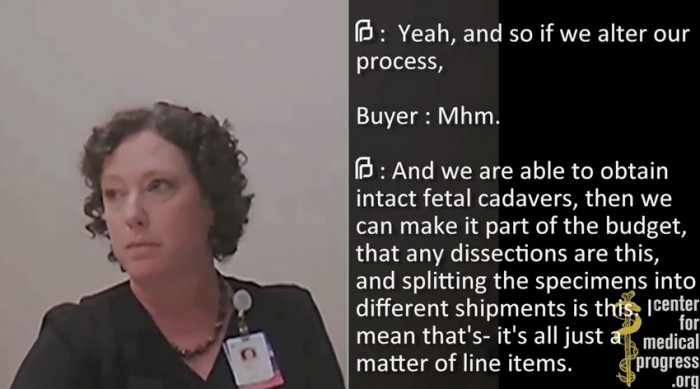 These recommendations for prosecution only touch the tip of the iceberg.

Planned Parenthood also has an “extensive history of ignoring child sexual abuse and enabling their predators,” documented in seven states. If that’s not enough, for years, undercover investigative cameras have been discovering illegal activity, dangerous practices, dismissal of women, and a complete disregard for basic humanity at Planned Parenthood clinics around the nation.

Not only are there the tapes showing actual arms, hands, feet, and legs of a just-aborted baby being picked apart at a Planned Parenthood in Denver, Colorado; there are also the tapes showing Planned Parenthood staff flat-out lying to women about other patients being transported to the hospital after botched abortions and giving medical misinformation about fetal development. When a woman in Appleton, Wisconsin, directly asked a Planned Parenthood counselor if her 10-week-old baby had a heartbeat, the counselor replied with completely inaccurate information, telling her that the heartbeat begins at “about seventeen or eighteen weeks.”

Science has known for decades — and seen with its own eyes — that our hearts start beating in our mother’s wombs at 21 or 22 days. Recently, scientists have discovered the first heartbeat of each person starts even sooner, at 16 days.

An organization that exclaims, “Another boy!” while sifting through said dead boy’s severed limbs and unabashedly pulls an aborted twin out of the freezer does not deserve our taxpayer dollars – no matter how much other good anyone wants to claim they do.

Of course we all agree that women should get their breast and cervical cancer screenings. But just because Planned Parenthood provides a minuscule percentage of these legitimate services — Planned Parenthood claims 1.8% of the U.S. marketshare on clinical breast exams, 0.97% of Pap smears, and 0.0% of mammograms  — does not give them an automatic right to constantly feed at the trough of government money.

Planned Parenthood, like any other taxpayer-supported organization, must be held accountable.

As an organization, Planned Parenthood has become so bloated and corrupt that it operates under a self-induced veil of untouchability, coiling in a corner and threatening to strike at the mere threat of defunding. An organization truly dedicated to helping women and families would not view itself as inherently deserving of the money citizens earn through blood, sweat, and tears. It would, instead, realize it is beholden to the people and the nation who fill its coffers.

But when caught red-handed, the best answer Planned Parenthood can come up with is that it will “retrain” its staffers. That excuse begins to ring hollow when it’s repeated, and that with lousy results. Undercover investigations aside, Planned Parenthood has been caught violating laws and regulations by actual state governments and whistleblowers within the organization. It has paid out millions in a settlement for Medicaid fraud, been shut down or fined again and again for filthy, disgusting, and dangerous conditions in its abortion facilities, and been caught storing unrefrigerated aborted baby parts in a janitor’s closet.

Planned Parenthood in Colorado also paid out an undisclosed amount to a 13-year-old girl’s mother after Planned Parenthood performed an abortion she was being forced to have, and sent her right back to her rapist, all without reporting a single word to the authorities. The judge involved in the case reportedly believed that Planned Parenthood’s behavior “was so outrageous that punitive damages would be appropriate.”

Under cover of our taxpayer dollars, Planned Parenthood has gotten away with too much. They expose women to dangerous and disgusting conditions; they lie and hand out medical misinformation like candy; state governments have found them engaging in fraud; Congress has discovered them violating the law; and they destroy the future of our nation to the tune of 887 children every day.

It’s high time justice stopped to knock at Planned Parenthood’s door, and that begins with defunding them.