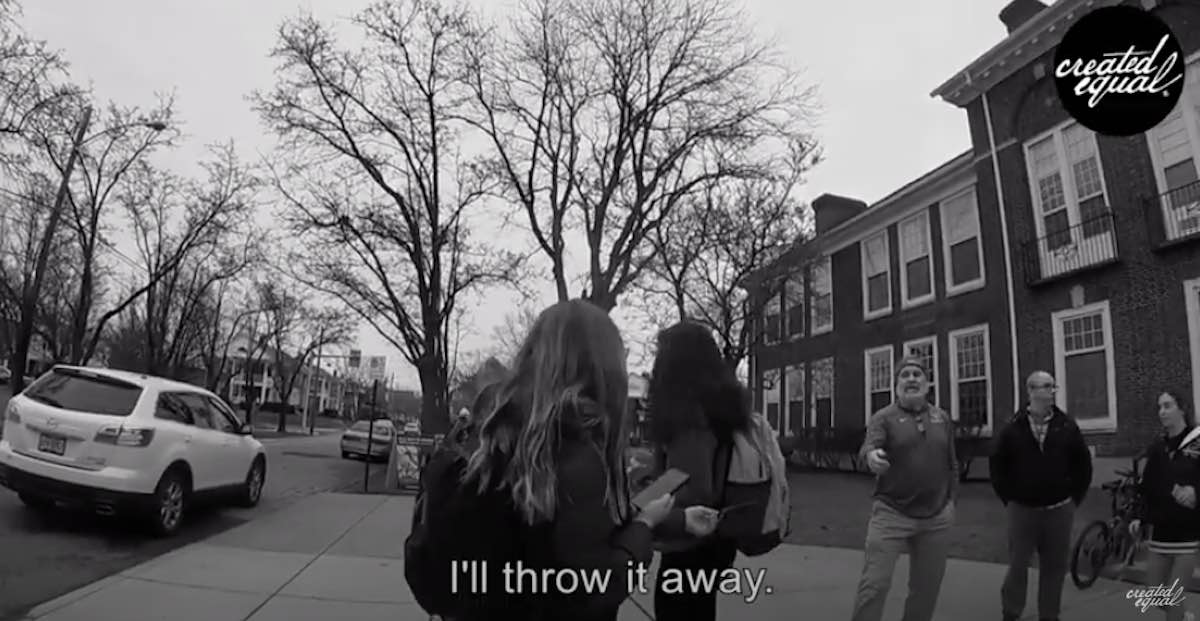 The pro-life group Created Equal released a video showing why high school students need to know the truth about abortion — and how they are prevented from learning it. Members of Created Equal’s team have video footage of the outreach efforts, standing in front of various high schools holding images of abortion victims and attempting to engage students in conversation.

Their video shows that the Created Equal representatives remained calm and focused on scientific facts while engaging students and parents in dialogue. They were met with some hostility, but many of the students expressed curiosity. At one school, when students took a pamphlet from the pro-life group, a teacher intervened, taking the pamphlet from the student and saying, “I’ll throw it away,” and, “Just keep walking and don’t listen to them.”

At another school, a mother told the pro-lifers they should not be at the school and that they were “messing with innocent kids.” In response, the Created Equal representative calmly stated, “Kids are having abortions in this school, so they need to see the truth.” According to Created Equal, of the 2,300 abortions committed in the United States every day, 300 of those are committed on high school girls. The students’ lives are also affected by abortion through the other people around them, such as one student who noted that his mother was currently pregnant and considering abortion.

Seeing what abortion actually is, the violent destruction of an innocent and defenseless human being, is incredibly powerful. Some of the students were not stopped from viewing the images, and talking to Created Equal representatives changed their minds about abortion on the spot, which is not uncommon. Students noted after seeing the victims of abortion, “It seems wrong,” and “It’s not right.”

The abortion industry has infiltrated sex education programs in high schools and presents inaccurate information, denying the humanity of preborn children and hiding the reality of abortion. Watch the video below to learn more from a former abortionist about what happens during the various types of abortion:

When asked why they were standing in front of high schools, one of the men from Created Equal asked, “If we don’t show it [the reality of abortion] to the people who are getting pregnant and considering abortion, if we’re not showing it to America’s future leaders and decision makers, then who do we show it to?”