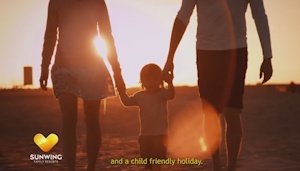 Danish travel company Spies Rejser has introduced a campaign to encourage Denmark natives to procreate. Specifically, the company has launched a competition encouraging couples to schedule their vacations during the woman’s ovulation cycle in the hopes that they will conceive during their travels and populate Denmark with more young people. A couple that can prove that their child was conceived during the vacation they booked with Spies Rejser is eligible for a prize package that includes a three-year supply of baby essentials and a kid-friendly vacation getaway.

In the following promotional video, “Do it for Denmark,” the company asks, “Can sex save Denmark’s future?”

Denmark faces a problem: The birth rate is at a 27 year low and there are not enough children being born to support the ageing population. The Danish government has not found a solution. But there has to be one. Meet Emma. She is Danish, but even though she was raised in Denmark, she was made in Paris. Right up there, in that hotel room.  Thirty years ago Emma’s parents took a little getaway. If these walls could talk. But it turns out Emma’s case is not so rare. 10% of Danish children are conceived on holidays. To travel and get new experiences affects relationships because couples see each other in a new light. It releases endorphins in the brain and creates desire for sex. It’s how we get children. In fact, Danes have 46% more sex on holiday compared to their everyday life. So to help the falling Danish birth rate, Spies Travel wants to encourage all Danes to take a romantic city holiday. After all, it will also help our future business. But if doing it for Denmark isn’t motivation enough, we made a little competition. Book your holiday with our ovulation discount. Get it on. And prove you conceived a child to win a 3-year supply of baby stuff and a child-friendly holiday… Participate in the competition. Do it for Denmark.

Demographers refer to regions in which the aging population is growing too quickly for the young populations to keep up with and support as an “inverted triangle.” Ideal demographic patterns resemble a regular triangle, in which the largest group of people on the bottom is the young people, who are strong and hearty enough to work to support their aging elders. As the elderly die out, the triangle tapers off at the top. This is a sustainable population that will continue to grow and be supported, without the threat that it will effectively die out. But in an inverted-triangle population, the young people are few, and the mounting number of the aging becomes a heavy burden, because there are not enough young people to both support the work force and care for the elderly parents and grandparents. Denmark is rapidly finding itself in the latter situation.

Will Spies Rejser’s campaign to grow Denmark’s population succeed? Time will tell. In countries facing similar problems across the EU, fertility incentives have varied in effectiveness.