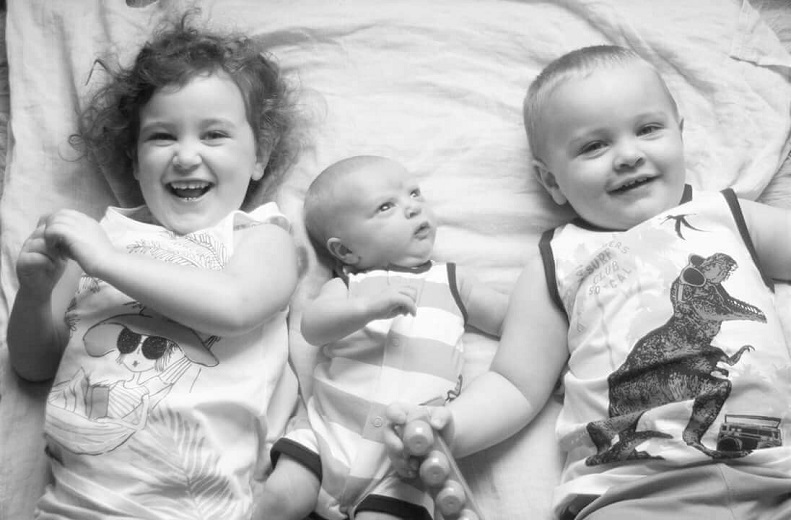 My pro-life story begins just before my husband Dillon and I got married. We were 19 and 20 when I was diagnosed with Endometriosis and required surgery. After the surgery, my Ob/Gyn told me that it shouldn’t be too difficult for me to get pregnant. In spite of my previous claims of not wanting children, I felt unexpectedly relieved that the door wasn’t shut for us.

The doctor put me on the NuvaRing for my endometriosis for the first six months of our marriage. Within two months after we switched to a less reliable form of birth control, I became pregnant with our first child. I’ll never forget the moment we discovered the news. We were at work together at Walmart when I realized that I was a week late for my cycle. On our 15 minute break, I took a pregnancy test. We couldn’t believe it! I was pregnant!

Frustrated and scared, we spent the next few days heavily debating between parenting and adoption. We were far from ready for a baby. We were living in my parents’ camper and working in retail. My husband didn’t even have his drivers license yet. With the cards seemingly stacked against us, we still decided to parent. 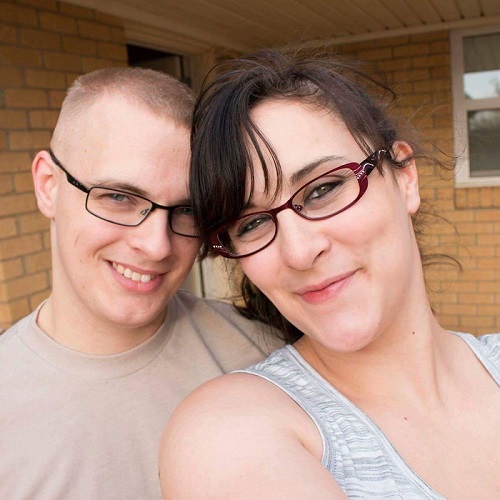 All seemed to be going normally until I was six weeks pregnant. That’s when Hyperemesis Gravidarum – also known as extreme morning sickness – hit, ravaging my body and our lives like an earthquake capable of shaking even the most stable of pro-life foundations. Hyperemesis Gravidarum is described as “severe and persistent nausea and vomiting during pregnancy”. Never has there been an understatement greater than this! Day-in and day-out for months, I laid on the floor or on the bed unable to move a muscle without the overwhelming need to throw up, knocking me right back down. For many women the vomiting never ends, no matter what they do, and for the ones where the vomiting ends, nausea usually does not.

My first pregnancy, though not the one where I was the sickest, was probably my worst. I could never have expected to feel so awful and I wouldn’t wish it on anyone. I laid on the floor of our camper drenched over a toilet throwing up stomach acid for days until my mother came and rescued me. She took me to the ER, where I received my official Hyperemesis Gravidarum diagnosis.

Dillon and I spent the next few months living at my parents’ house, going through some of the rockiest times in our marriage. I was fired from my job because of my regular absences and my husband was left with the financial burden of everything. He even had to walk to work every day because I wasn’t able to drive him.

READ: 21% of women with extreme morning sickness have abortions but there is help

My lowest point was lying in bed pleading to God for Him to please take the burden of this pregnancy away from me. And while I was not wishing for my child to die, I was wishing that she had never existed. I felt so guilty for that even crossing my mind.

I tried to distract myself from my thoughts and pain by putting on a Pandora playlist, and as I was lying there, a song came on that gave me the strength. The words to “I Look To You” by Whitney Houston still bring me to tears as I thank God for all that He helped me through. Every time I felt particularly low or frustrated I just played this song for me and my baby. She and I were in this together.

I started to improve by the time I had reached the third trimester, but there were still many days where I was suddenly overtaken by nausea and incapable of moving.

About six months into my pregnancy, God provided a new career for my husband that only presented itself because of my pregnancy. We finally moved to our first apartment and after 30 weeks of vomiting, hospitalizations for dehydration and kidney issues, our precious baby Soffia had finally arrived. Throughout my pregnancy, I wasn’t sure I’d ever want to be pregnant again, but I knew nothing could be further from the truth from the moment I held her in my arms. Every single moment of that horrible disease I faced was worth bringing this beautiful life into the world.

Fast forward nine months. We were still living in a lovely (but tiny) one-bedroom apartment. All of a sudden I found myself getting extremely sick again, and sure enough, we were pregnant with our second child.

Despite constant nausea and vomiting, Dillon and I grew stronger as a couple, and the bond I had with my daughter made every day more bearable. Even when she was just 15 months old, anytime I was sick, she would come in and cuddle with me or give me kisses while I was throwing up. I could not have asked for more reassuring signs from God than my daughter’s loving nature and my husband’s endless support. Even though I was sick and unable to get out of bed most days, I still spent time playing with and teaching Soffia. Having my husband and daughter in my life made the second pregnancy fly by.

We had our first son Todd in no time, and he was just under ten pounds at birth. He looked so much like his daddy. Watching the bonds that were being created with our new son, his father, and his big sister, melted my heart. I felt so blessed!

Eleven months after Todd was born and on our third form of birth control, we conceived our third child (yes, we are incredibly fertile people). At this time my husband was planning to join the Air Force in order to provide a more comfortable life for our family.

The pregnancy with our third child brought all sorts of complications and frustrations. Yet again I was extremely sick, overwhelmed, emotional, and tired. I now had two children to care for on top of being incapable of walking to the bathroom without severe nausea.

After the first couple of months, my husband and I had finally developed a system which helped us get through the day. Before bed, Dillon would get sippy cups ready for our two children and I would have breakfast ready next to the bed. I would spend the morning playing with the kids in bed until Dillon came home for lunch and he would then help me move to the living room where I spent the rest of the day taking care of the kids. Even though we had pretty much mastered daily life with parenting, pregnancy, and Hyperemesis Gravidarum, it didn’t make it any more fun. We were just pushing through the best way we knew how.

Only a few weeks before Dillon left for basic military training, I was hospitalized yet again for kidney issues caused by Hyperemesis Gravidarum. Dillon became increasingly worried about leaving us fearing something would happen while he was gone.

He knows quite well how debilitating Hyperemesis Gravidarum is and it killed him inside to know that he wouldn’t be able to physically be there for me and the children. Nevertheless, he knew it was best for our family in the long run and mustered up the strength to go to San Antonio. When Dillon left for basic military training, I was already extremely sick, and now the added bonus, a complete emotional wreck.

The only thing that kept me sane was listening to praise and worship music in the car on the way to church. Sadly that didn’t last long. Despite my hardships being well understood, I was met with a frustrating obstacle that only a mom with Hyperemesis Gravidarum would understand. It turns out that throwing up while driving tends to make you perpetually late. The church I grew up in informed me that if I continued to be late for church, then my kids would no longer be welcome in Sunday school. It was a special kind of disappointing.

Instead of letting that make me bitter, I learned a very valuable lesson from this experience. Even when the people you should be able to rely on the most during these situations can and do let you down sometimes, God never fails us! We should never give up on God because He certainly hasn’t given up on us. This experience did not deter me from going to church with my children. I found a new church to go to and it made my husband’s absence a little more bearable.

Upon my husband’s graduation from basic training, I decided to make the five-hour road trip to San Antonio with two kids while still pregnant. My extended family had planned to come, but had medical emergencies and couldn’t make it. Though still extremely sick, I enjoyed every minute I spent with my husband, so much so that I pushed myself a little too far.  The night after I returned him to the base, a huge wave of Hyperemesis Gravidarum hit me which not even a second dose of my nausea medicine could hold off.  It plunged me into preterm labor! My brother, who happened to live in San Antonio, came and picked up my children from the hotel and called an ambulance. After getting an IV and several medications to stop my labor, I went to his home the next morning, where he and my amazing sister-in-law took care of me for the next several days.

After that incident, the symptoms of Hyperemesis Gravidarum started to give me a little break. I had very little vomiting – though still lots nausea – so long as I remembered to take my medication every day and on time.

Finally, our second son Jeffrey was born in 2016. I can honestly say that the moments where our older children were meeting their newest sibling were the happiest and most amazing moments of my life. There are three moments I look back on which fill me with the most joy: The day my husband asked me to marry him, the day I did marry him, the births of our children, and watching them grow up together.

Despite how awful my pregnancies were in their own ways, every moment gave me the three children I love waking up to everyday. There’s nothing in this world I would trade being a mom for. Given the opportunity, I would gladly do it again.

I know many women who suffer from Hyperemesis Gravidarum think that there is no light to the end of this tunnel. As a mom who has experienced it three times, I can promise you there is. You may not be able to see it right now, but the joy you get from your children is far greater than anything you suffer during the nightmare that is HG. Every moment of Hyperemesis Gravidarum was worth the precious lives my husband and I brought into the world. Our family would be incomplete without them. It’s also important for pro-lifers to be sensitive to women struggling with the disease. You need to understand that this is not regular pregnancy symptoms. It’s not something someone can easily “push through.” Help them in their day-to-day activities, be a safe sounding board for them to vent, and encourage them along the way. Sometimes the difference between life and death is knowing you are not alone.

Testimony as told by Tiffany Allen to Feleica Langdon of Life Defenders.