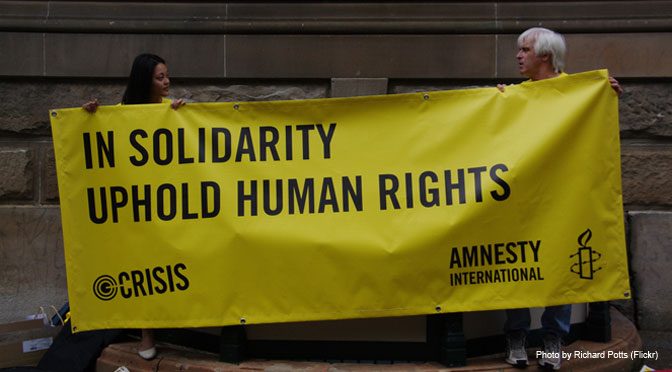 In 2014, a report was released detailing some of the CIA’s interrogation techniques; they weren’t pleasant.

Terrorism suspects experienced waterboarding, mock executions, long term sleep deprivation, cold temperatures, and worse –sometimes with fatal results. The report also identifies twenty six individuals who appear to have been detained by mistake, including one described as being “intellectually challenged.”

Amnesty International reacted with outrage, and the group’s UK branch demanded an inquiry into the British government’s “alleged complicity in this torture.” This isn’t surprising, as torture is something Amnesty consistently stands against. Well, except when they’re defending it.

The UK website also attacks Northern Ireland for banning abortion in most circumstances. That the law protects children conceived in rape as well as those with disabilities has Amnesty particularly upset, with the group calling it “shameful” and “a betrayal of women and girls.”

The group dismissed concerns from Northern Ireland’s attorney general that changing the law could lead to disabled children being targeted. “To be clear,” an Amnesty press release read, “fatal and severe fetal impairment means the fetus will not survive birth or for very long after birth.” Angela Morales’ family would beg to differ.

Baby Angela got a prenatal diagnosis of anencephaly. While doctors said it was “incompatible with life,” Angela didn’t seem to know that: she celebrated her first birthday last summer.

Similar predictions were made about Ana Carolina Caceres. The Brazilian author, journalist, and musician was born with microcephaly, a condition that’s been in the news recently.

A Zika virus outbreak has hit South America, and it’s believed the disease is linked to microcephaly in babies. Some have cited this as a reason to relax Brazil’s abortion laws, but Caceres says otherwise, contending that “those who have abortions are not giving their children a chance to succeed.” And when that chance is denied, the results are gruesome.

What Amnesty calls “severe fetal impairments” often aren’t detected until well into the second trimester. Abortions at that stage involve a technique called D&E. How is it done? Dr. Anthony Levatino is a former abortionist, and he’s happy to explain:

As you listen to Dr. Levatino describe pulling off arms and legs, consider the findings of Dr. Kanwaljeet S. Anand at the University of Tennessee. His research indicates that a fetus can feel pain at twenty weeks; if that isn’t torture, then it’s hard to imagine what is.

Northern Ireland’s leaders should defy Amnesty International by continuing to defend children before and after birth. Meanwhile if the folks at Amnesty really want to fight torture, then there’s something simple they can do: stop justifying it.