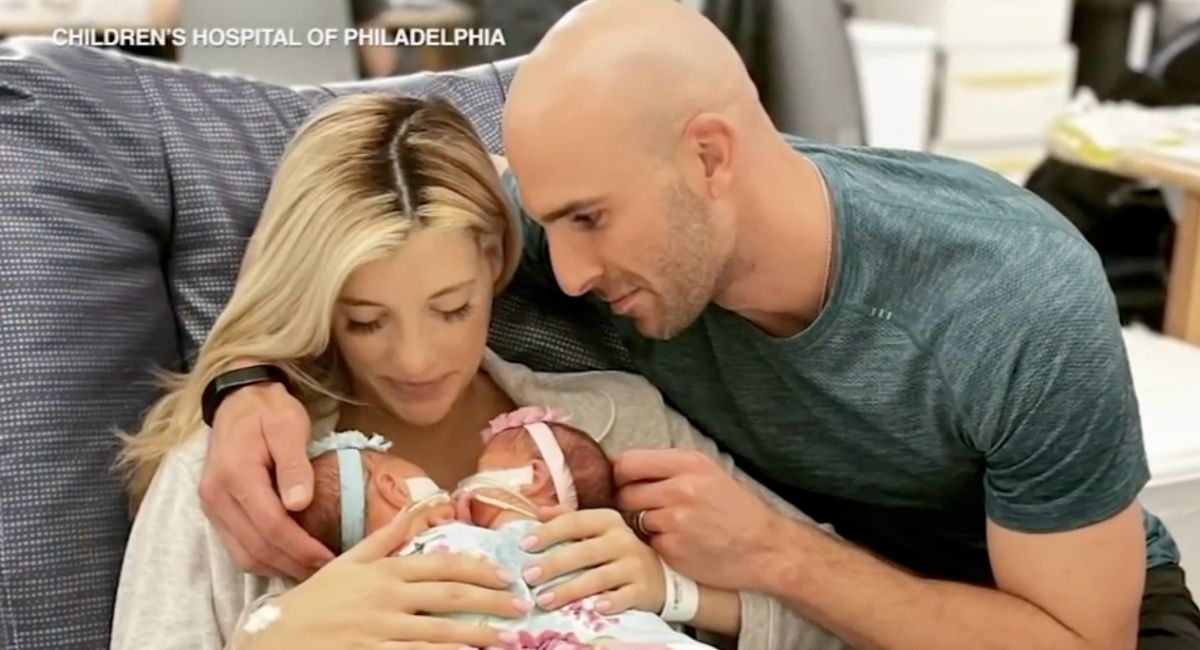 Maggie Altobelli was 20 weeks pregnant when during a routine ultrasound, doctors gave her blindsiding news. She discovered that she and her husband Dom were going to have twins — and those twin girls were conjoined at the abdomen and chest.

“It was a surprise and it was very shocking,” Altobelli told TODAY Parents. “But, we just thought that God gave us these girls for a reason.”

The Altobellis were determined to do everything they could to make sure their girls, Addison and Lilianna, were well cared for. That meant moving from their home in Chicago to Philadelphia so that they could receive treatment at Children’s Hospital of Philadelphia (CHOP), where doctors had experience separating conjoined twins.

Prenatal tests revealed that the twins shared a liver and diaphragm, but not a heart. This was good news, as it gave doctors hope that the twins could be separated successfully. “The (scans) are your first clues about whether or not babies are going to be separated,” Dr. Holly Hedrick, one of the surgeons, told TODAY Parents. “The biggest factor is really the heart and whether the heart is conjoined.” Still, the Altobellis knew the girls were facing a high-risk surgery.

After the twins were born, they were immediately whisked to the NICU (neonatal intensive care unit) for medical treatment. While separation surgery was always on the horizon, the girls first needed to grow before their bodies would be ready to withstand the procedure. Hendrick explained that they also underwent tissue expansion, which allowed them to grow extra skin since they were sharing a chest and abdomen. The skin was later grafted on after surgery.

The girls did face some medical complications in the early days. Because they shared a chest — and a diaphragm — crying and breathing became difficult at times. “If Lily got upset … she would (control) the breathing,” Maggie said. “There were times where Addy had coded because she couldn’t breathe because Lily would get upset.”

The twins were finally ready for surgery nearly 11 months after they were born. A team of a dozen surgeons worked for 10 hours to separate them in an incredibly difficult procedure that involved separating the liver and dividing the diaphragm. The happy parents know the time down to the minute when they were told that their girls had made it through.

“It was very surreal, just very emotional. The whole day was very peaceful and we kind of just gave it to God — and we’ve done that throughout this whole journey,” Altobelli said. “We’re just so lucky to have surgeons who know what they’re doing and really worked hard and cared for our girls like they were their own.”

Two months later, the Altobellis were finally able to leave CHOP and return to their Chicago home. Addy and Lily both require breathing tubes and a vent, but doctors are hopeful they’ll be able to one day breathe on their own. “This is our journey. It’s a very special one in many ways,” Altobelli said. “These girls are going to live long, healthy lives. It’s pretty miraculous and unbelievable that we’re living this life.”

Dom agreed about the impact his daughters have had already. “They have already given us more than love than we could have ever imagined,” he said. “We hope they can spread that love throughout the world.”