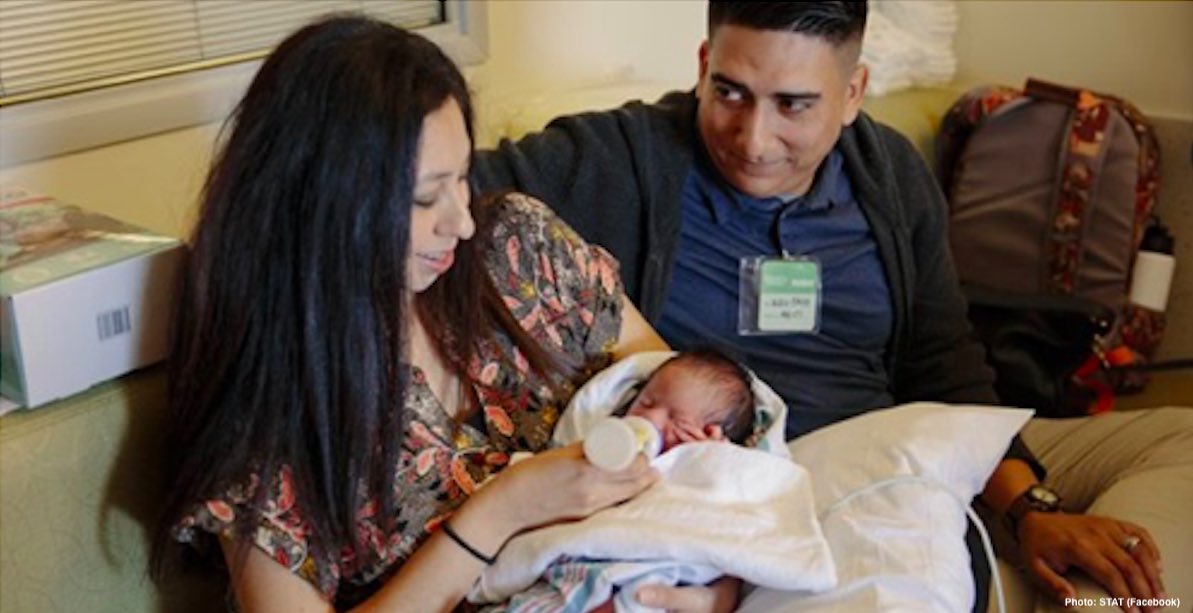 Baby Abigail has become the first baby to undergo a new kind of surgery to treat spina bifida before birth. This new procedure is considered to be safer for both mother and child.

At just 16 weeks, Abigail’s parents Gilda and Arnuf Giron received the shocking news that their preborn baby girl had the most severe form of spina bifida called myelomeningocele. Her spinal cord was open and leaking fluid, leading to nerve damage that could cause paralysis. The diagnosis was frightening — one that causes many parents to give up and abort their babies. But this couple wasn’t looking to quit; they were looking to win the fight for their daughter’s health and life.

Currently, prenatal surgery for spina bifida is performed at about 25 weeks and involves cutting into the mother’s abdomen and uterus like a C-section. A few hospitals offer a less invasive endoscopic surgery that still cuts into the mother’s abdomen, but only makes small cuts into the uterus. Special tools are placed through those small incisions to perform the surgery. Neither of these options looked like a good choice for the Girons, according to STAT, because their insurance wouldn’t cover the less invasive surgery, and that surgery was also out of state. They had to make a decision as to whether to do the standard surgery and deal with a more difficult recovery for Gilda and a C-section at birth, or move their family and spend all of their savings on the less-invasive surgery. But then, a third option came out of nowhere.

STAT reports that a new study was forming for a new kind of fetal surgery for spina bifida. It would be safer for Gilda and it would be close to their home. It was also covered by insurance. The couple wasted no time in meeting with the lead surgeon, Dr. Ramen Chmait.

And with that, mother and daughter were scheduled to undergo the surgery in February. Chmait had been traveling for years to learn the technique from Dr. Denise Lapa in Brazil, where there is a high rate of spina bifida due to malnutrition. Abortion there is illegal. Rather than killing preborn babies there with spina bifida, Dr. Lapa, pioneered this surgery and had performed nearly 100 of them when she flew to the U.S. last year to help with the very first to be done in the country at New York-Presbyterian Hospital, which was not publicized. Lapa was also present at Abigail’s surgery.

“It was like an ’80s flick where the basketball team wins the championship,” said Arnuf. “There were high-fives all around. They didn’t even have to say a word.”

Despite the risk of premature birth, Abigail stayed put, and labor was induced at 37 weeks. She was born weighing 5.5 pounds and the patch over her repaired spinal cord was still in place.

“Every birth is a great experience,” said Gilda, who has two other children. “But this was really, really emotional.”

Now, just a few weeks after her birth, Abigail is amazing doctors, who call the surgery “life-changing.” They believe this new endoscopic surgery will become the next standard of care for preborn children with spina bifida. The study will continue for a few years as they perform a total of ten surgeries and carefully watch the babies. Abigail will be closely monitored for five years. Though she may one day need a brace, doctors predict she will be able to walk on her own.

“Abby is going to go home with no operative intervention at all, and she is going home in about a week,” said Dr. Alex Van Speybroeck, director of the spina bifida program at Children’s Hospital LA. “I have never seen that in my career.”