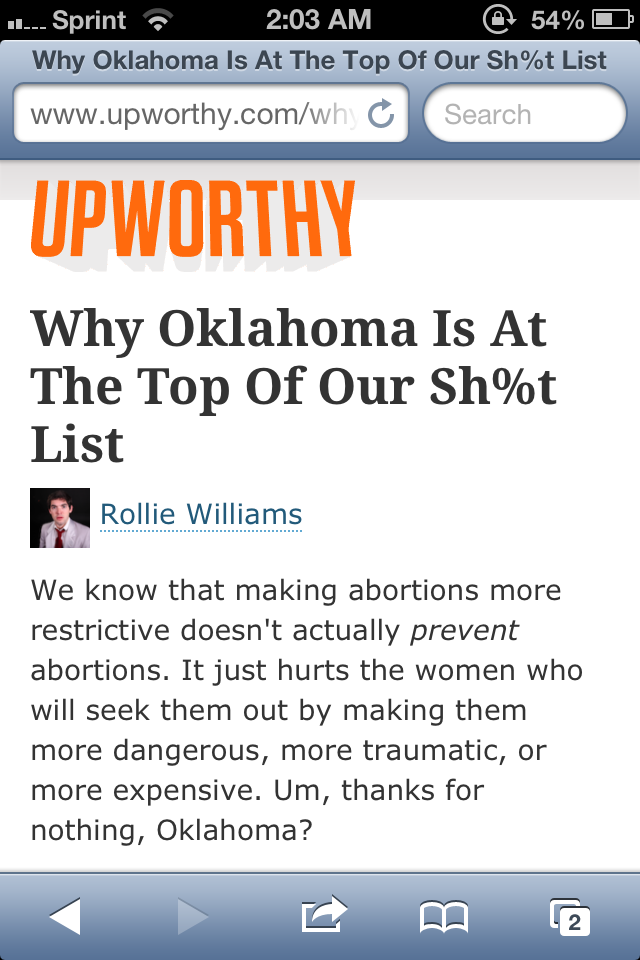 There seems to have been some confusion regarding the two pieces reporting on Rollie Williams’s post on Upworthy. Nancy Flanders put in quotes that Oregon is “best state to have sex in.” My own title was a play on Rollie’s title, but just added in “consequence-free” to more accurately describe the kind of sex Rollie was talking about. However, if you go look at the piece now, you may be like, What are you talking about, Rebecca? Rollie nowhere mentions Oregon as being the best state to have sex in!

This is because Rollie changed the title of his piece. Those who shared the link on their social media sites sometime before late on August 7 shared the link http://www.upworthy.com/why-oregon-just-became-the-best-state-to-have-sex-in. However, the site now redirects to http://www.upworthy.com/why-oklahoma-is-at-the-top-of-our-sht-list. It’s the same page, just a different title.

With the new title, “Why Oklahoma Is At The Top Of Our Sh%t List,” Rollie now exclusively discusses abortion, and nowhere is sex mentioned anymore. Instead, Rollie takes aim at criticizing Oklahoma for its abortion restrictions and starts off with a bit of a far-fetched claim:

We know that making abortions more restrictive doesn’t actually prevent abortions. It just hurts the women who will seek them out by making them more dangerous, more traumatic, or more expensive. Um, thanks for nothing, Oklahoma?

First of all, I don’t know whom Rollie is talking about when he says “[w]e.” It also doesn’t matter what kind of restrictions are in place; abortion is still going to be invasive and traumatic. And perhaps most importantly,  I don’t think the unborn children and women who would have regretted or have been harmed by their abortions are going to be saying “thanks for nothing, Oklahoma.”

Second, according to the Planned Parenthood-founded Guttmacher Institute, 10% of pregnancies in Oklahoma end in abortion, which is almost half of the national figure at 19%. What does Williams attribute this exceptional figure from Oklahoma to, and why do abortion-permissive states like New York have 33% of their pregnancies ending in abortion?

Why did Rollie Williams change his title? Perhaps it’s because he finally realized how ridiculous it was to equate “best state to have sex in” to the single factor of easy abortions through all nine months. While Rollie’s piece is still an unfortunate example of pro-choice viewpoints which completely fail to recognize the motivation behind regulations, it’s a bit of a break and a relief from the nauseating bro-choice viewpoint on sex. That said, the abrupt and major changes to the article likely speak more to a desire to skirt the criticism of the original piece received than to a new revelation.