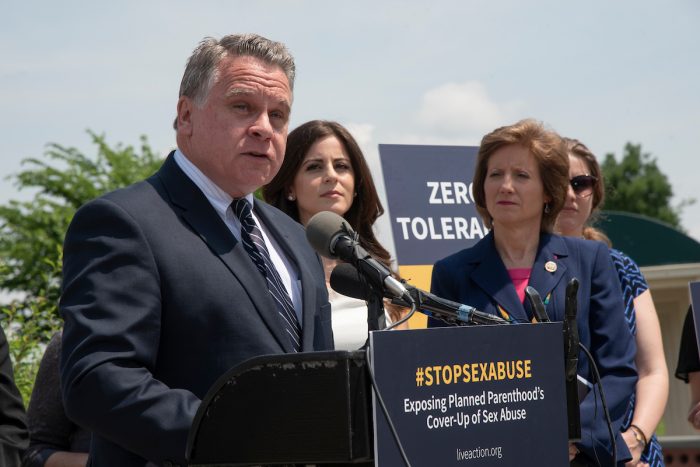 Today, Rep. Chris Smith (R-N.J.), co-chairman of the Congressional Pro-Life Caucus, joined several of his Congressional colleagues as well as Live Action president Lila Rose and others, in a press conference asking the Department of Health and Human Services to investigate Planned Parenthood and all Title X ‘family planning’ federal funding recipients for systemic failure to report suspicion of sexual abuse and trafficking of women and girls who visit their facilities.

Rep. Smith has long been an outspoken supporter of life. He, along with other pro-life stalwarts like Rep. Vicky Hartzler and Rep. Diane Black, recently announced support for the Trump administration’s “Protect Life Rule,” a change in the HHS Title X rule that requires abortion businesses to separate their birth control and healthcare services from their abortion-related services in order to continue to receive Title X federal funding. Rep. Smith was a featured speaker at the 2018 March for Life, and he voted in favor of The Pain-Capable Unborn Child Protection Act, a bill which would have banned abortions after 20 weeks gestation.

“As the prime author of the Trafficking Victims Protection Act of 2000,” he said, “I find Planned Parenthood’s complicity in sex trafficking absolutely appalling.”

Smith added, “The sting operation by Live Action exposed seven Planned Parenthood facilities, including in my home state of New Jersey… where the personnel… were willing to facilitate” abortions, despite knowing the women were being trafficked. “Absolutely appalling. I encourage every member of the press to watch those videos,” he said.

“The new Title X regulation will significantly beef up the reporting and the assistance provided to those children and young women who are hurt every single day through abuse, show up at a Planned Parenthood clinic, and the abuse continues unabated.”

Fifty-six members of Congress have signed a letter asking HHS secretary Alex Azar to open an investigation into the cover-up of sexual abuse and trafficking at  Planned Parenthood.

Live Action president and founder Lila Rose noted at the press conference, “Unfortunately, because the American taxpayer is funding this group, 1.5 million dollars every day, we also are complicit in enabling the abuse of these young girls and enabling the perpetuating of the abuse of sexually trafficked victims…. We urge Congress, the HHS, and the administration to continue to take action on behalf of our most vulnerable, both those in the womb and our young … victims of abuse.”