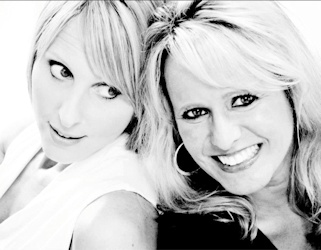 Daisy and Mockarena, a.k.a. “Chicks on the Right.” Via chicksontheright.com.

Chicks on the Right, the dynamic duo of Mock and Daisy, are popular with conservative women, which is proven by the over 86,000 likes they have on their Facebook page. The pair never hold back their opinions, and they will unreservedly stare down anyone who disagrees with them. But a recent post rattled more cages than usual, just as they obviously knew it would. After all, it’s called: “So Yeah. This Will Be Controversial, I Know, But…”

In this particular post, Mock writes about why she is disappointed in Paul Ryan for cosponsoring a bill that would bestow full legal rights upon a human zygote at conception. She says:

I’ve always been one of those people who believes life begins with the beating of a heart (which happens at around 5 weeks gestation).  That’s why I’m a HUGE proponent of the morning after pill, the week after pill, ANY form of birth control, and as an absolutely last resort, even abortions up to the 5th week of pregnancy.  But once the heart starts beating?  Nope.  That’s the termination of a LIFE.

Yup, that is the termination of a life. But where did that heart come from? It certainly didn’t just appear, just as a baby doesn’t suddenly become human the second its baby toes exit the birth canal. There’s a definitive start to life, and it is in that one instant when egg and sperm unite. I’m no scientist, but scientists and doctors everywhere agree on this. For example, in testimony to a U.S. Senate committee and reported by The National Association for the Advancement of Preborn Children, Dr. Alfred M. Bongionanni, professor of pediatrics and obstetrics at the University of Pennsylvania, said:

Many other doctors testified to the same scientific truth as well. So while Mock may “believe” that life begins with the beating of the heart, it’s just her opinion. And opinions have zero weight when compared to scientific fact.

But beyond giving her opinion of when life begins, Mock goes on to make a statement that has potential to negatively affect the right to life movement. Mock doesn’t think the goals and works of the pro-life movement will change Roe v. Wade. She writes:

But let’s be realistic about this.  The chances for Roe v Wade being overturned are slim to none.  We all know this.  And that’s why I’m in favor of legislation which makes it less convenient than it currently is to get an abortion.

Listen: anti-abortionists are all in favor of legislation that makes abortion not only less convenient, but also impossible after a certain stage of pregnancy. But the end goal has been and always will be to overturn Roe v. Wade. Will it happen overnight? No. But it will happen – in stages, hopefully in our lifetime. Chicks on the Right don’t say whether they do or don’t want Roe v. Wade overturned, but they fail to see that Roe v. Wade stands in the way of legislation that would make abortion less available. The Roe v. Wade standard that any substantial restriction to getting an abortion is unconstitutional would have to be removed in order to make abortion less convenient or put any limitations on it.

If abortion abolitionists can make abortion illegal after the child has a heartbeat, that will be a huge accomplishment. But it won’t stop there. Because there’s too much room for error. Too many opportunities for children’s lives to be destroyed with lies jotted down on paperwork by abortionists. There is too much gray area. Abortion can be only illegal or legal at all stages of pregnancy and human development. And anti-abortionists won’t stop until it is completely illegal. Each passing pro-life law (and there have been a lot lately) brings us one step closer to that celebratory day on which unborn human life is completely protected.