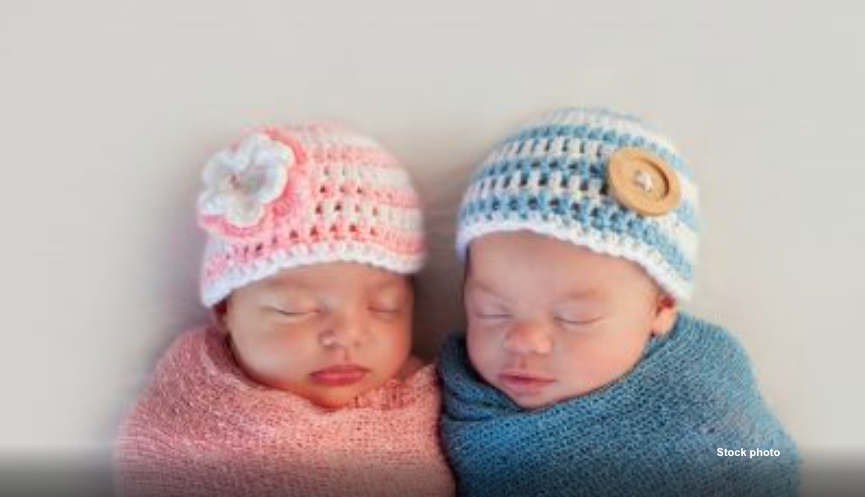 A twin brother and sister were born at 24 weeks gestation — 16 weeks early– by C-section in Olympia, Washington, to Brandon and Kaitlyn, first-time parents. “As soon as I saw them … so much love and happiness washed over me, and they were the two most beautiful things I’ve seen in my life,” Brandon told local news outlet The Olympian. “I just kind of instantly want to cry when I talk about it.”

The couple is raising funds to not only pay for their children’s medical expenses, but, sadly, to pay for a funeral for their son, who passed away in his mother’s arms, according to The Olympian, after surviving outside the womb for 46 hours. He weighed 1 pound, 8 ounces at birth. “I was just cradling his head and we were just comforting him the best we could,” said the twins’ father.

The boy’s sister, weighed 1 pound, 4 ounces, at birth. According to The Olympian, she opened one eye for the first time just two days ago, her father telling the local news outlet, “She’s the strongest person I think I’ve yet to meet… She is extremely feisty.”

A poster in the tiny girl’s room showcases her footprints and those of her brother. It reads: “Though I am little, I am FIERCE! #preemiestrong … Such a BIG miracle in such a tiny girl! Small but mighty — stay strong, little fighter.”

The twins’ grandfather described his granddaughter as “about the size of your hand, maybe slightly larger. Very tiny.” All of the little girl’s body systems have been in place and functioning since the first trimester. Babycenter.com describes a baby at 24 weeks gestation — the same age as this preemie girl — as “about the length of an ear of corn,” and says the baby’s “lungs are developing ‘branches’ of the respiratory “tree” as well as cells that produce surfactant, a substance that will help his air sacs inflate once he hits the outside world.”

At the time of the family’s local news interview, the small girl was not yet breathing independently, which is common for babies of this gestational age. As described above, babies this age often need assistance because their lungs are not yet fully ready for the world outside the womb. The grandfather told The Olympian, “She’s doing good. They’re putting some milk on a Q-tip and she sucks it off a Q-tip. They were thinking today (Friday) they might be able to take the breathing tube out and she might be able to breathe on her own.”

While, thankfully, every effort is being made to save this tiny girl’s life, it is unfortunate that viable children her age are still legally aborted in the United States, should their mothers desire it, for any reason. One abortionist openly advertises these late-term abortions on his website. Another abortion facility has been caught on tape expressing willingness to abort a child at 30 weeks because of the “stress” in the mother’s life.

In the video below, former abortionist, Dr. Anthony Levatino, explains the torturous D&E procedure, typically committed between 14 and 27 weeks gestation:

Too often, we speak of abortion as if it is a sterile, tidy procedure that simply “ends a pregnancy.” But the truth is, abortion is a brutal death, and children even younger than these preemies’ age can feel pain. (Some research points to the possibility that children can feel pain even in the first trimester.)

Recently, the U.S. House of Representatives passed the Pain-Capable Unborn Child Protection Act, which would ban abortion on children who can feel pain. It has since been introduced in the Senate. If this bill is finally passed, it could save the lives of thousands of children who are worthy of life, just like this beautiful survivor.