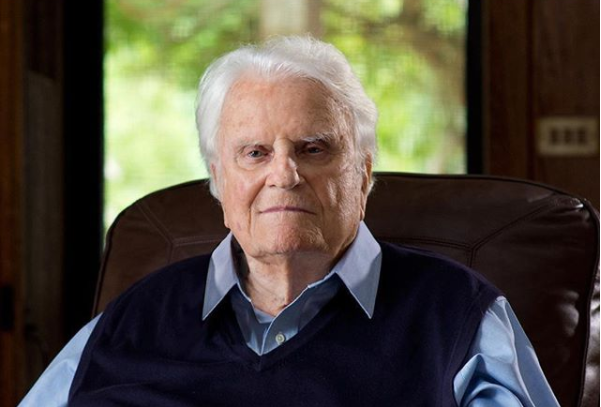 Billy Graham has died at the age of 99. In his near-century of life, the famous evangelist witnessed the destruction that legal abortion has caused women and the world. As a respected Christian leader, Billy Graham said that he knew all life is precious to God and that abortion is therefore wrong. As a family man, he saw first-hand the stress that an unplanned pregnancy can cause, when his 16-year-old granddaughter became pregnant. It’s perhaps, because of this, that Graham reached out to post-abortive women with compassion and to women considering abortion with the truth. He likely hoped that they, like his granddaughter, would choose to participate in the beauty of life, despite its difficulties.

Here are some of the top pro-life quotes from Billy Graham:

In response to post-abortive woman “consumed with grief”:

One of abortion’s unseen (and unacknowledged) consequences is exactly what you have experienced: deep regret and guilt over what happened.[…]

What you did was wrong in God’s eyes — but He has not rejected you or abandoned you. He loves you, just as He loved the child that was growing in your womb (and is now, I am confident, safely in His presence). Furthermore, when Christ died on the cross, all your sins — without exception — were transferred to Him, and He took upon Himself the judgment you deserved. As the Bible says, ‘He is the atoning sacrifice for our sins’ (1 John 2:2).

On society’s indifference to abortion:

Tragically, however, sometimes a far different consequence takes place: spiritual and emotional insensitivity to what happened. This, I fear, is the reaction of far too many in our society today. The reason is because we have become centered only on ourselves and what we want, rather than on God and His will for our lives (and the lives of our children, both born and unborn). The Bible warns, ‘Woe to those who call evil good and good evil, who put darkness for light and light for darkness’ (Isaiah 5:20).

In response to a pregnant, single young woman considering abortion:

[It] would be wrong for you to end the life of the little child who is growing inside you. I know it’s common today to think of abortion as a simple answer to an inconvenient problem–but it is actually a far more serious issue. Your child isn’t simply a mass of tissue; he or she is a human being in God’s eyes. God told Jeremiah, ‘Before I formed you in the womb I knew you, before you were born I set you apart’ (Jeremiah 1:5).

On why abortion is a big issue for Christians:

The spiritual condition of man is at the root of the abortion issue. Until man’s spiritual condition is changed by the power of Jesus Christ, we will not find a full solution to this problem. It is sin that produces the problem of most unwanted pregnancies, as well as all the other disorders which plague the human race.

Life is sacred, and we must seek to protect all human life: the unborn, the child, the adult, and the aged.

To a young man praying for his girlfriend to consider aborting his child:

You’ve probably heard the old saying that ‘Two wrongs don’t make a right’—and it’s true, especially in this case. What you did by having sexual relations outside of marriage was wrong in God’s eyes—but allowing the little child that is growing inside your girlfriend’s womb to be killed would also be very wrong in God’s eyes.

To the parents of a 16-year-old girl facing an unplanned pregnancy:

My prayer is that you and your daughter will not end the life of the little child who is growing within her. Yes, abortion sounds like an easy way out—but all human life is sacred, and should never be taken without just cause.

While Billy Graham was clearly against abortion, he did, on occasion, state that he believed abortion is acceptable in rare circumstances such as rape and incest as well as when the pregnancy is causing health problems for the mother, or if the preborn child has been diagnosed with a health condition. However, abortion is never necessary.

In cases of pregnancy by acts of rape and incest, abortion is a second act of violence against the woman as well as the killing of her innocent child. Rape and incest are horrific injustices and women who experience them need healing and the support of their community; however, abortion puts to death an innocent child for the crimes of the father.

As for pregnancies that cause concerns for the life and health of the mother, abortion is not the solution. Doctors should work to save both mother and child by attempting to stabilize the mother for as long as possible until her child can be delivered. An emergency C-section is much safer than a late-term abortion which takes at least two days to complete. Former abortionist Dr. Anthony Levatino explains:

As for preborn children diagnosed with a medical condition, abortion is an act of discrimination. Even if a child is predicted to die at birth, that child deserves to live a life during which he is loved for the amount of time he has – whether that is five hours outside the womb or five minutes. If the child has been diagnosed with a chronic health condition, she also deserves to live her life. Disabilities do not define a human being’s value.