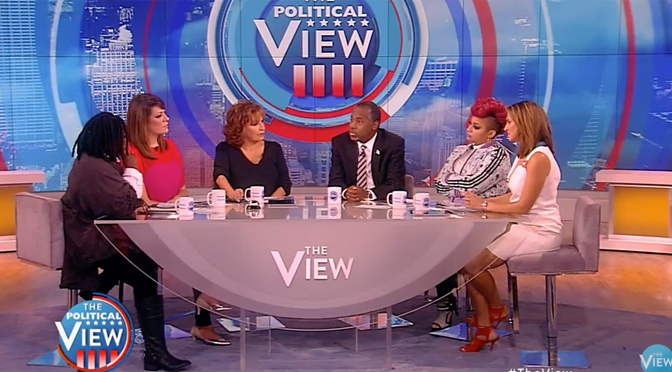 Republican presidential candidate Dr. Ben Carson took on the all-female, mostly pro-abortion panel (at least one of whom is still falsely claiming that Planned Parenthood offers mammograms) on The View today, discussing his beliefs on life, birth control, and the Republican Party.

“In my case, I spent my entire career trying to preserve life and give people quality of life,” [Carson] said, explaining his past operations on premature babies and babies still in the womb. “There is no way you’re going to convince me that they’re not important, that they’re just a mass of cells.”

Whoopi Goldberg then deflected the conversation from the life in the womb to whether or not Carson could empathize with the “horrendous decisions” that women must make when choosing abortion. But if there is no life in the womb, what makes the decision to abort so “horrendous”?

Joy Behar didn’t really have a coherent argument, but that didn’t stop her audience from applauding wildly when she claimed Republicans should be supporting Planned Parenthood (known for its repeated lawbreaking) for providing birth control and mammograms for women.  Interestingly enough, some Republicans have actually advocated for making birth control available over the counter – no Planned Parenthood necessary. And as we’ve already discussed, Planned Parenthood does not provide mammograms, as confirmed by their CEO just one week ago, under oath before Congress – despite previously claiming that they did.

Kudos to Dr. Carson for keeping his cool and articulating his position in the midst of fervent opposition.