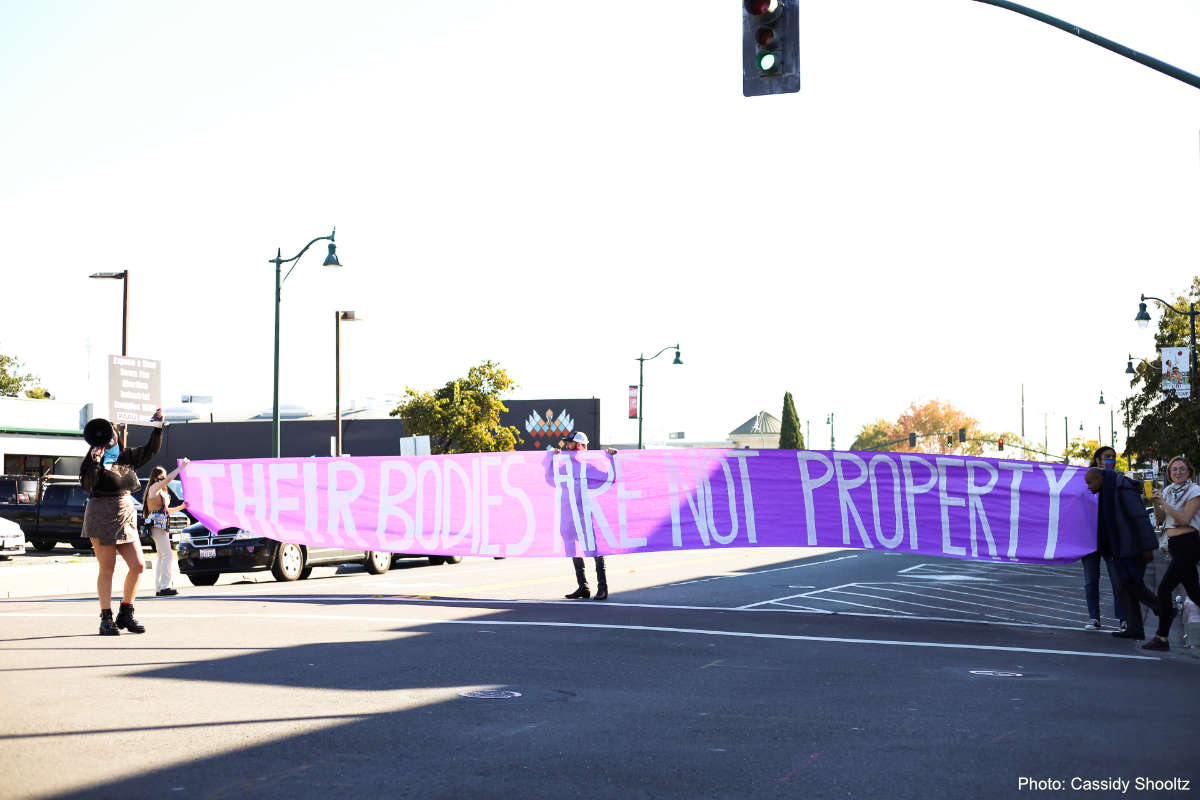 Activists from Pro-Life San Francisco, Survivors of the Abortion Holocaust, Progressive Anti-Abortion Uprising, and Rehumanize International gathered on November 11 at the Alameda, California, offices of Advanced Bioscience Resources (ABR) to protest that organization’s role in the aborted fetal experimentation taking place at the University of California, San Francisco (UCSF).

ABR first came to the public’s attention as a result of investigative journalism by the Center for Medical Progress (CMP), which exposed ABR’s lucrative position as “the oldest continuously operating wholesaler of aborted fetal body parts in the United States.” CMP revealed that ABR’s annual revenue from the sale of aborted baby body parts — which they buy from individual abortion facilities, including many run by Planned Parenthood, then re-sell to taxpayer-funded research laboratories at an astronomical markup — runs in the millions per year, and is growing.

Federal law prohibits profiting from the sale of fetal organs and tissues, and ABR has been under scrutiny from the federal government since shortly after CMP’s investigation was made public. An inquiry by the Senate Judiciary Committee in 2016 led to ABR’s inclusion on a list of criminal referrals; in 2017, an FBI investigation was opened. Members of Congress have repeatedly requested updates on that investigation, but no information has thus far been made publicly available.

However, records obtained by Pro-Life San Francisco have also revealed a longstanding relationship between ABR and UCSF. Obtained records include actual invoices and pricing information for aborted fetal remains including second-trimester liver, thymus, and pancreas organs, brain tissue, and heads. Prices paid for fetal parts range from $390-$20,000 — all subsidized by taxpayers. 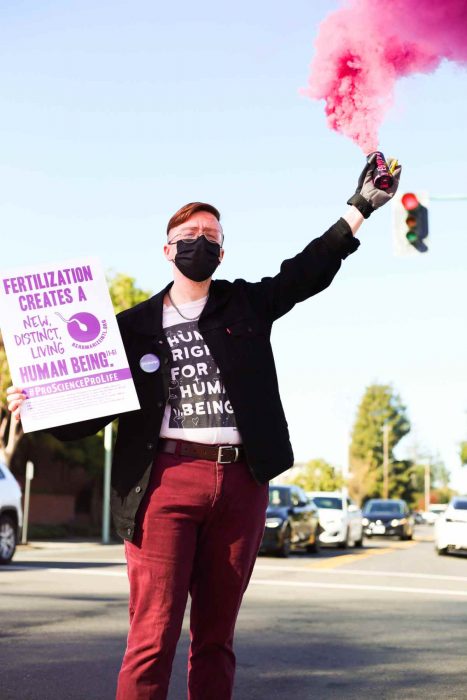 The “research” conducted using these fetal parts has no unique medical or scientific benefit to humanity. “Contrary to popular belief, fetal tissue from induced abortions is not necessary for research and the development of medical treatments,” states Dr. Tara Sander Lee from the Charlotte Lozier Institute. “In fact, to date there have been no cures from abortion-derived human fetal tissue.” She continues:

Because of the gruesome, unethical, and unnecessary nature of fetal body part trafficking and the abortions which supply it, and because of ABR’s pivotal role in this industry, activists from both the San Francisco Bay Area and across the nation staged a direct action on Thursday morning designed to raise local awareness about the human rights violations quietly transpiring in their own backyard. Coalition activists from across socio-political and religious spectrums entered the building where ABR’s offices are located, chanting slogans and distributing informational flyers detailing the company’s questionable practices. 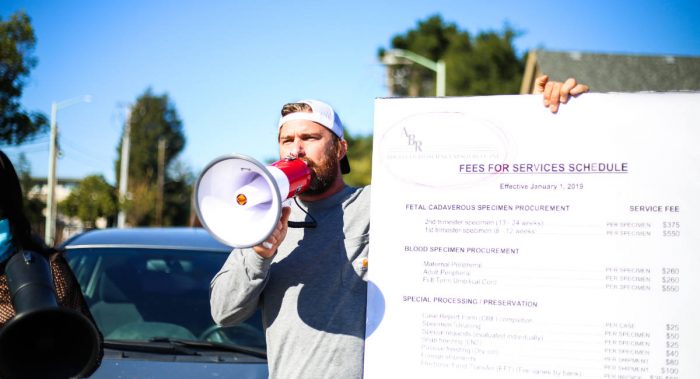 Afterward, activists took to the streets outside. A 10’ x 15’ screen projecting images of aborted children and pro-life messages was set up immediately across the street from ABR’s offices. Meanwhile, using 40’-long purple banners spanning the full width of the two-lane streets reading “Their bodies are not property,” and “End fetal organ harvesting,” the activists shut down traffic, first at Oak Street and Lincoln Avenue, then at Lincoln Avenue and Park Street — two of Alameda’s principal downtown intersections — for approximately one hour and 30 minutes, respectively.

Leaders from the organizations that planned the action addressed the crowd using bullhorns, noting the relative unimportance of a minor traffic delay compared to the human rights atrocities happening around the corner every day. At the same time, flyers explaining the reason for the action were distributed to drivers stuck in the traffic pileup, and individual activists engaged drivers and passersby in conversations about the unethical nature of fetal organ harvesting and the duty of every citizen to take a stand against it.

When asked about the strategy behind this particular action, Kristin Turner, Executive Director of Pro-Life San Francisco, said:

People haven’t been listening to us scream about [abortion and fetal trafficking] for the last two years, so we’re going to stop them from getting their morning coffee and make them realize people are dying. Advanced Bioscience Resources has a checkered history when it comes to ethical and legal practices. Pro-Life San Francisco will not stop fighting until ABR stops pricing the body parts of children. Direct action is the only way we will stop these practices once and for all. 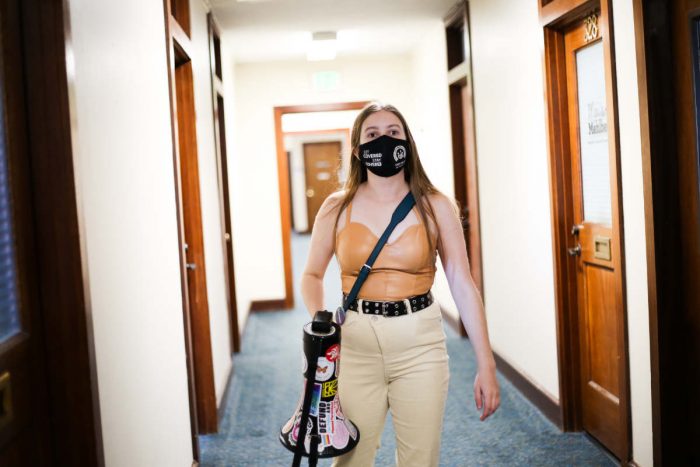 Similarly, Emma Jane Craig, one of the activists present on Thursday, explained that, after the CMP undercover videos were made public, she believed fetal body part trafficking would be brought to an end, and that she came to the protest because that had not yet happened. “Enough is enough,” she said. “Pro-life advocates have to turn up the heat.”

Today we were standing against the violent destruction of innocent life and speaking out against those who profit from it. Unethical and barbaric fetal tissue research is taking place across this country at places like UCSF and the University of Pittsburgh at taxpayer expense. It is long past time for these experiments to be put to an end.

Along the same lines, AJ Hurley, Executive Director of Survivors of the Abortion Holocaust, stated:

The battle against every human rights atrocity in America has been fought and won through non-violent direct action. Such action elicits a response — it may not always be pleasant, but silence is no longer an option. Members of this community must decide — either they think it’s okay for the organs of pre-born children to be cut out for profit in their backyard, or they must fight to end it. There is no middle ground. We demand that the citizens and government of Alameda shut down Advanced Bioscience Resources now.

All involved groups indicated they will continue to stage similar actions until the killing stops.